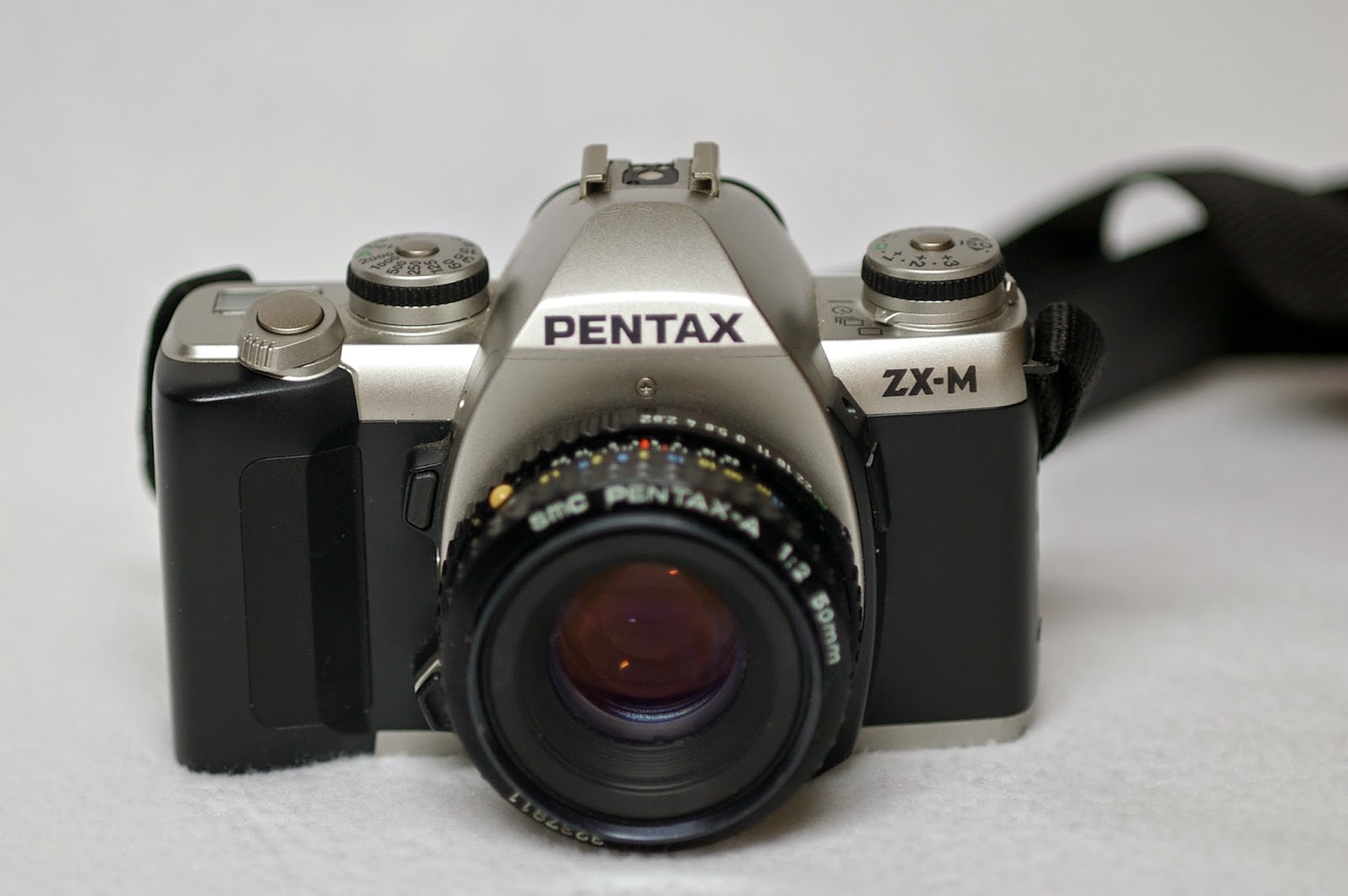 The other day, another package appeared with a K-mount camera, but this time it was actually a Pentax.  A ZX-M, to be precise, with a 50mm f/2 Pentax KA lens.  It was a Goodwill auction item, for $11.03 and with shipping, cost me about $25, which is less than what the lens goes for, which is why I bought it in the first place.   I have had other iterations of the plastic-bodied Pentax SLRS, but not this model.  I previously reviewed the Pentax ZX-5, which is an AF version, whereas the ZX-M is totally manual focus, but does have Program, Shutter Priority, Aperture-Priority and Manual modes. It must be the lightest SLR I have picked up thus far.  Unlike the comparable Nikon N65, the ZX-M meters with non-AF lenses, and should be thought of as a replacement for the venerable Pentax K1000.   It has exposure compensation settings of +/- 3 in half -stop increments, and an ISO range of 6 to 6400 if you set it manually.  There is an exposure lock button that lasts for 10 seconds after you push it.  Shutter speeds of B, and 2 sec to 1/2000 sec, and in aperture-priority mode you can get times exposures as long as 30 seconds.  The electronic shutter is stepless in A mode, so, shoot away!  The camera has single shot mode, continuous (2 fps) and self-timer.  There is also a depth of field preview button... something that is often missing on inexpensive cameras.

The camera is incredibly light, and with the 50mm lens, batteries (2 CR-2) and a roll of film, weighs just a bit over a pound. The penta-mirror keeps the weight down, and the relatively low-profile of the camera makes it easy to tuck into a bag.  I have a roll of the FPP 200 b&w film in it now, and will post my results later.

While many people give the advice to start with a 35mm SLR camera like the Pentax K1000,  Canon AE-1, or Nikon FM, there is no reason not to use a camera like the ZX-M.  The features are more advanced than the K1000, which is now getting on in years, and it's also a fraction of the price.   It's certainly cheaper than a 4-pack of Fuji Superia film at Walgreens.  It uses every K-mount lens, and can certainly be used to take wonderful photographs.

Thanks for the perspective on this camera. I see these on eBay all the time but always hesitate. I won't next time, esp. if an SMC Pentax-A lens comes attached.

Wow is just the simple word that may explain that how much I liked it. It was nicely stuffed with the material I was looking for. It’s great to be here though by chance.
wedding photography in san diego