The Minolta Hi-Matic G2 was the next-to-last of the Hi-Matic line, appearing in 1982.  It's a zone-focus camera that is fully automatic, and while it has the Hi-Matic name, it has a largely plastic body, and yet retains a classic appearance. It's similar in controls and appearance to the Hi-Matic G, which was released in 1974. 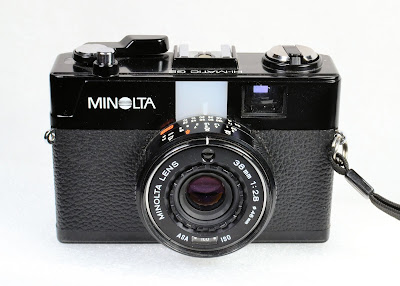 I don't mind fully automatic cameras, so long as I feel comfortable with them and have some idea about what settings the camera has chosen for me.  The Hi-Matic G2 has shutter speeds from 1/60 - 1/250 sec. (and I am not sure if its 2 shutter speeds or if there are others between 1/60 and 1/250), and the 38mm lens has apertures from f/2.8 to f/22. Like almost every other small camera of its type, the CdS light sensor resides just inside the front of the lens bezel, and turning the ring around the lens adjusts the ISO setting from 25-400. The zone focus has 4 icons, with the closest focus at 1 meter. It no longer says "Rokkor" lens on the front, just "Minolta Lens."  It accepts 46mm screw-on filters, and since the light meter sensor will be behind the filter, it will automatically compensate the exposure.  Next to the Auto setting on the lens, are a series of setting with guide numbers that are to be used with a flash.  The flash will sync at any shutter speed. Other than the focus scale, ISO setting, and guide number setting, there are no user-adjustable controls (see below).  This is truly an automatic exposure camera.  Although the camera does have a tripod mount, there is no B setting or way to attach a remote shutter release to the camera. It slips easily into a jacket pocket, though. 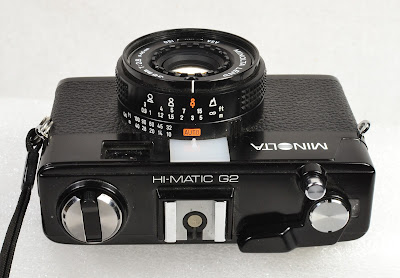 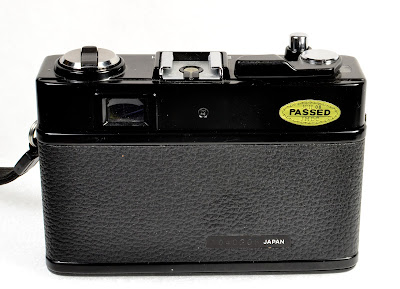 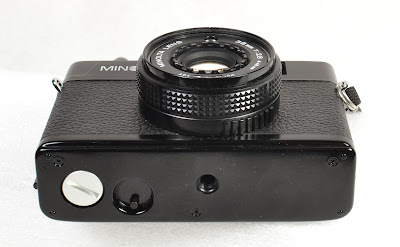 Power-wise, the camera originally called for a  Mercury PX-675 cell, but using a modern alkaline 1.5V equivalent does not seem to be a problem, as the exposures I had looked just fine.

In use, the camera is very compact and is really easy to shoot with.  I suppose one might call it a good snapshot or street camera, and they would be right.  You can make the Hi-Matic G2 an even more versatile camera if you wish to turn the Guide Number markings into something like a limited manual exposure.  By turning the camera from AUTO to the Guide numbers, the shutter speed stays at 1/60 sec, and the guide numbers set the aperture at f/2.8 (GN10), f/4 (GN14) f/5.6 (GN20), f/8 (GN28), and f/11 (GN40). Without a battery, the default shutter speed is 1/60 sec, so you could make it work pretty well with no battery and ISO 50-100 film, and adjust the aperture by the guide numbers.

Since there is no on/off switch, keep the lens cap on when storing the camera so that 1.5v cell doesn't discharge.

Overall, I was happy with the images that I got from the Hi-Matic G2.  It's one of those cameras that has an appeal to people that value well-designed, easy-to-use cameras that can be ready to shoot with in an instant.  The only drawback for me, is the relative lack of control over the exposure settings, but the camera did okay with the conditions that I used it in.


It's certainly an easy to carry-around zone-focus camera that might be just the thing for many photographers that want something better than a Harman 35 simple-use camera.

Posted by mfophotos at 1:24 PM

I do like this type of camera, the "in-between" the small rangefinders and zone focus machines of the early 70s and the autofocus machines that would quickly come after. I had a couple Konica C35 EF and I loved the photos. But the flashes didn't work, and with no manual exposure control and the slowest shutter speed of 1/60, it was pretty much useless in low light. I did manage a level of "pseudo-aperture priority" control by using the exposure lock function--having an aperture readout in the viewfinder was helpful. I wouldn't mind finding one of these Hi-Matic G2s.