The Winpro 35. The birth of the low-fi plastic 35mm camera. 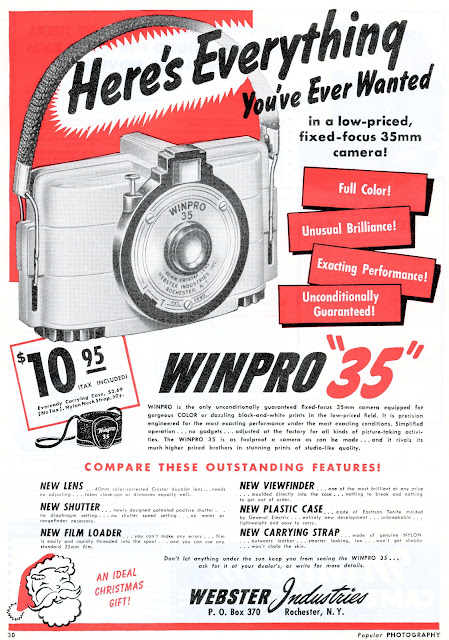 I'm working away on my 35mm toy camera issue, and this camera profile is a bit of a teaser from what I am doing.

I think the grandfather of modern 35mm plastic cameras was the Winpro 35, introduced in 1947 by Webster Industries, of Rochester, NY.  It incorporates a single element 40mm f/7 Crystar lens with Instant and Time shutter speeds, single aperture and simple viewfinder in a Tenite plastic body.  It sold for $10.95 in 1947.  Still, a reasonable sum at the time. Kodak introduced Tenite in 1929, and it is considered the first modern thermoplastic.  The camera was advertised to be nearly indestructible by its designers, and in fact, they showcased the camera after having dropped it from a tall building.  Later iterations of the Winpro 35  featured several apertures and a flash connector.  The whole idea of the Winpro 35 was an inexpensive and reliable 35mm camera that was priced below the offerings of Argus and Kodak in post-WWII America.  Webster Industries sold at least 150,000 Winpro 35 cameras between 1947-49 and sold their patents to another group that eventually renamed themselves as the Zenith Film Company.  Zenith offered a color slide film based on expired Kodachrome patents, which they called Dynacolor.  Unable to retain the quality control of the earlier Winpro 35s made by Webster,  Zenith reached its nadir by 1952, where remaining Winpros sold for less than $8 at closeouts in Rochester area photo stores. [Glass Brass & Chrome, 1972;  Webster Museum page]

My Winpro 35 is a later model, sold by the Zenith Film Co.  I purchased it on eBay for about $30, which is an average price for the camera in today’s market.  As you can see, the wind and rewind, and exposure counter are all on the bottom.  The camera strap wires hold the clam-shell body together.  The tiny viewfinder is centered over the lens. There is no tripod socket.  The three numbered apertures are probably f/7, f/11, and f/16. 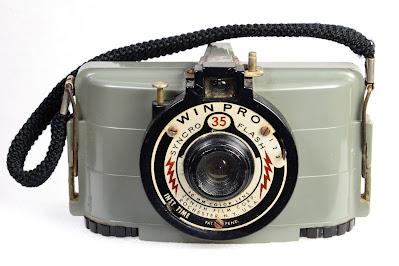 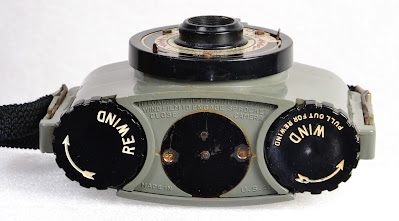 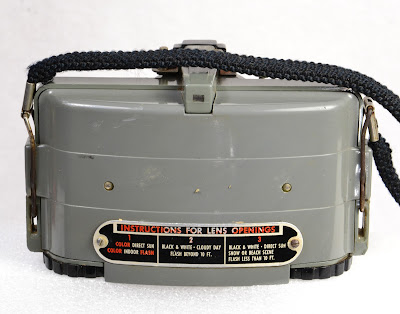 I loaded the Winpro 35  with a roll of Ilford Pan-F, which at an ISO of 50, should be the ideal match for this camera.   I shot a few photos with it last September with a bunch of photographers from the Asheville area during a photo walk in Marshall, NC.  It sat on the shelf until recently, when I realized that I had not developed the roll.  Seeing there was still some film left, judging by the exposure counter, I shot a couple of images on the B setting in my study/studio. Using the camera was not difficult - the camera actually works quite well, and I appreciate its ingenious design.

I developed the Pan-F in D76, and scanned the negatives with my Epson V700 scanner. The results were not as good as what I would get from a modern single-use camera, but they actually look like they were taken quite a while ago. 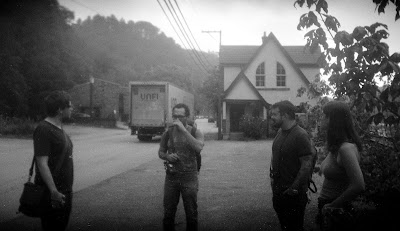 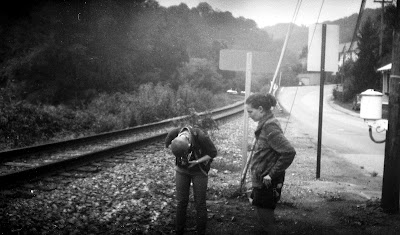 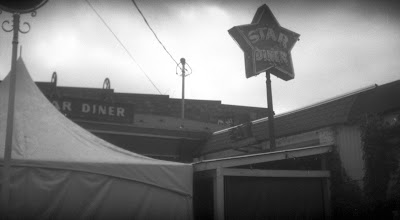 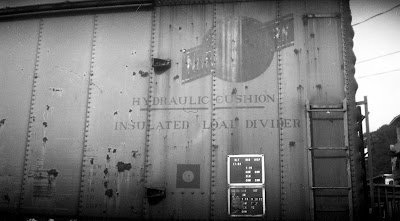 For the outdoor shots, I think I would have done better with an ISO 100 film.  The indoor shot was on B, and might have been 2 sec  at most.  The lens is prone to flare, and perhaps there's dirt and haze inside.  Maybe the price wasn't low enough in 1947 for this camera for it sell well.  Maybe it should have been $1.99.  Image-wise, it leaves a lot to be desired if you expected it to compete with something like an Argus A. However, as a toy camera, it's got atmosphere in spades!  The simple design predates the plastic craptastic wonders of the 1980s-2000s, and it is a lot sturdier than the ABS plastic cameras of today.

For more information on the WinPro 35, check out the following sites:

Posted by mfophotos at 9:44 AM