The 1980s was a decade of major change in the camera industry. Auto-focus was becoming a factor in the direction of new cameras, and while the Konica C35AF was the first AF point and shoot in 1977, SLR manufacturers were testing the AF waters with kludgy AF lenses attached to manual focus cameras. For those, we had the Nikon F3AF, The Canon T80, and the Pentax ME F with the SMC Pentax-AF 35-70/2.8 KF-mount lens.  In short, they were all dead-ends, because the focus motor was inside the lens, along with the batteries to power it.  It was not until 1985 that SLR manufacturers took AF seriously on advanced and pro-level SLR cameras when Minolta produced the Maxxum 7000 as a complete system camera with the focus motor inside the camera, along with the full control of the lenses on the body. Canon came out with the EOS system in 1987, Pentax brought out the SF-1 in 1987, and it was the first AF SLR with a built-in flash.  Nikon brought out the N2020 in 1986, which aside from the AF features, was nearly identical to the manual-focus N2000 that was released in 1985. While very similar to the popular N2000, the N2020 (F-501 in Europe) features the lens motor in the body, with the ability to use nearly all AI and AIS manual lenses, as well as AF and AF-D lenses.  This was accomplished without changing the lens-mount (as did Pentax), unlike Minolta and Canon, which created new mounts for their AF cameras that were not backwards-compatible with their manual predecessors. 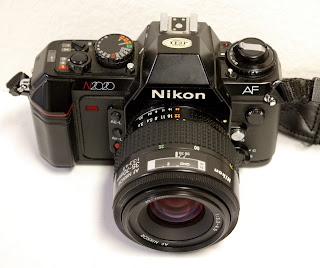 While Nikon kept producing the manual-focus F3HP (until 2001) and the FM2N (until 1997) (followed by the FM3A 2001-2006), the switch to an AF pro-level body, the F4, did not take place until 1988.  In the meantime, Nikon produced a series of mostly forgettable AF cameras (N4004, N6006), until in 1988, the N8008 was also introduced. However, the N2020 stands out as a particular bit of genius because it looks like a manual-focus camera with the typical dials and controls one expects from an analog camera. Yet, the inclusion of the lens motor makes this first AF-SLR body from Nikon quite noteworthy.

I have previously owned a Nikon N2000 body, and found it to be a very capable SLR with great metering, easy-to-use controls, and with very good ergonomics.  The off-center tripod mount (rectified by attaching an AH-3 bottom plate adapter) was the only quirky bit, because of the AAA batteries in the bottom of the camera. The N2020 is exactly the same in that regard, but with the added AF-L, and M-C-S focus controls. The N2000/N2020 use an automatic film advance and a manual rewind knob, and were the first Nikon SLRs with polycarbonate bodies. 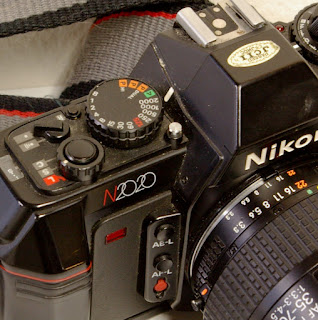 What I find particularly nice about the N2020 is that it uses manual lenses without feeling awkward.  The green focus assist light works with manual lenses, and since there is no split-screen focus, that is useful. Because it was designed to use lenses with manual aperture control, it will not work with G-lenses (still not my favorite).  The camera does have three different P modes, but I confess that I have not used them.  I am basically an Aperture-Priority and Manual mode kind of guy.  The N2020 has a max shutter speed of 1/2000 sec, and ISO ranges of 12-3200.  Exposure compensation is available for +/- 2 stops in 1/3 stop increments.  DX-coded cassettes can be used (setting the ISO wheel at DX), or the ISO can be set manually.

The N2020's AF is a bit slow by today's standards, with only a central AF point.  In dim light, it may be faster to use manual focus.  However, I found that for most subjects, the AF is fast enough for my use.  It certainly is no slouch when using manual focus lenses, and in that regard, it's a perfect camera to learn with.  All of the controls are there for full manual operation, and the only auto-anything is the film advance.  If you want to use a remote release, you'll need to find an MC-12A release that attaches to the front left of the camera, as a standard threaded cable release is not included.  The viewfinder is not too bad, with 93% coverage.  You can use Nikon dedicated TTL flashes in full auto-mode with a shutter speed of 1/125 sec.  The perfect matching flash would be the SB-16 or SB-20. 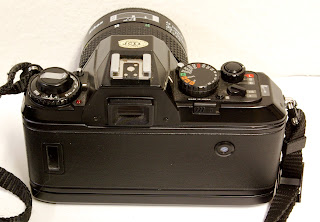 The camera is now 32 years old, and certainly newer than the myriad of Nikon FMs and FEs in circulation.  I see it as a classic camera in a special category - Nikon's first AF SLR body. It has classic styling and is a robust camera. Whether you opt for the N2000 or the N2020, you will have the same controls, but the N2020 has the advantage of using both MF and AF lenses, and in that, I feel the N2020 is the superior camera. 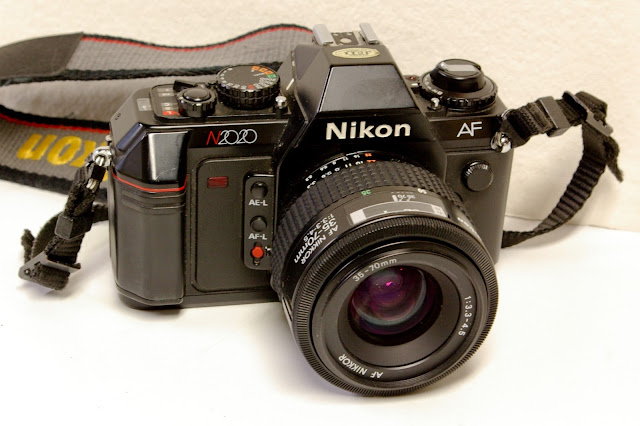 Just lately I came to own a Pentax ME F. It's an interesting camera but the autofocus is slow and unsure. It focuses well only on obvious subjects in great light.

I own a Nikon N2000 and really like it. I took it with me to Ireland in 2016 and it performed very well. I'm in the process of shrinking my collection of gear down to the stuff I'll actually use frequently. I don't actually need my N2020 because I own an F3 and two F2s -- but I'm going to be hard pressed to say goodbye to it, because I like using it so much.

That Pentax is somewhat rare, what a find! The N2000/N2020 may be way undervalued, but they do give good results, and the autowind is convenient, for sure.
Two F2s -- same here :D