I sure do love Chromes, and you should, too!

For most of my years, there was just one way to share your photos to a bunch of people at once -- a slide projector.  To do that, you needed to use reversal film, also known as slides, chromes, or transparencies. Reversal film is called that because the normal photo image is a negative, which is printed to make a positive.  With reversal film, you get a positive after developing.  Of course, since the idea is to project the image, and view it as a positive, there is no orange mask, and the base is clear, hence, they are transparent.    They became the defacto medium for most pro photographers, unless they were shooting black and white.  If you were a nature photographer, it was a given that you shot slide film.  It allowed editors to quickly pick the best images out on a light table; the individual slides were easily packaged and labelled, and passed along to the composition dept., etc.  Magazines like National Geographic bought cases of film (especially Kodachrome) for the photographers, so that a single batch all had the same color characteristics.
In the amateur photography sector, countless vacations and moments were shot on slide film so that they could be projected and "enjoyed."   The process was so simple -- shoot your rolls, send them off to Kodak, and get back beautiful color slides in mounts so that they could be loaded into the projector. 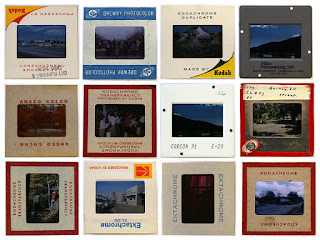 Then came the digital onslaught and almost overnight, slides became an anachronism, as computer LCD projectors replaced the beautiful slide presentations.  The medium and large formats were also affected by the digital tide, though they comprised a smaller pie of the transparency film sales.  At this point, two processes produced transparencies -- K-14 -- Kodachrome (limited to 35mm at the end) and E-6 -- Kodak's Ektachrome line, Fuji's Velvia, Sensia, and Provia lines, and and a few lesser-known emulsions  from Europe and Japan.  In the year 2000, there were  about 40 different color slide films available, from Kodachrome 25 to Ektachrome P1600 Professional.  Some films were made for shooting in tungsten lighting, such as Fujichrome 64T and Kodachrome 64T.  Often, those were used for studio work to photograph artwork and still-lifes.  The prices, in year 2000 prices for 36-exposure rolls ranged from cheap Imation Chrome 100 (Ferrania) at $6.80/roll to $18/roll for Fujichrome Provia 1600.   During the period from 1981-2005, I shot a lot of slide film; some of it was Kodachrome, but a lot was Fuji Sensia and Velvia, as well as various flavors of Ektachrome.


The other effect that digital had on slide films was the loss of local E-6 labs.  When pros were using E-6, local labs got a lot of work, and they dwindled as digital became the norm for most professional work.  Kodachrome was last processed in 2010, and aside from some experimental forays by a few people, the old expired boxes of Kodachrome are best left on the shelf. It's too bad that people forget how many jobs were lost due to the digital avalanche.  Now, there are few local film labs of any sort, and the mail-order labs have dwindled to a few major ones that are now seeing their business grow as film becomes more popular (such as The Darkroom).  However, if you want to shoot E-6 films, you can process the film yourself at home.  Unicolor has a kit that is sold under several brand names, but the Film Photography Project Store certainly has the best deal.

So, that brings us to the present-day.  As far as fresh slide film, Fuji is the only current manufacturer, though Kodak should start putting its new Ektachrome on the shelves in the coming months.  That's a big deal, since Kodak was out of the slide film business about 5 years ago.  While Film Ferrania has had a struggle getting their slide film into production, it's largely been because of matters that are not directly related to the film itself.  I hope that they are successful in the end.  That brings me to other sources for slide or chrome films, and that would be the Film Photography Project.  They sell a line called Retrochrome, and there are two films available - Retrochrome 160 and Retrochrome  320 - both are "expired" but certainly quite usable and the FPP has a large quantity of these films.  I have shot both, and of the two, I like the 320 film much more.  I feel my initial tries with it at 320 seemed overexposed, so I have been shooting it at 400.  The color palette is warm, and the film has grain, giving a definite "retro" look.   I would also check  Ultrafine Online's catalog as they offer fresh Fuji slide film and some expired but usable chrome films, too.  Freestyle Photo is another good source for fresh slide film.

I really love seeing color transparencies, especially on 120 film.  Spreading out a bunch of color slides on a light table is quite enjoyable, too. Each image is bordered by a frame, and become separate photos.  While I rarely show slides these days, I still have lots of 2x2 slides in archival sheets.  My recently shot images are just scanned like any film strip, and kept in negative preservers.  But if I wanted to, I could easily put them into individual slide mounts. My 120 chromes are also kept in clear archival holders.  I have a bunch of frozen 120 Velvia and Provia that should last me for a while.

So, you may wonder why should you even bother to use chrome films?  You can cross process them in C-41 chemistry for a different look, as Lomography folks have been doing for years.  However, standard E-6 chemistry gives you a more accurate color rendition.   Use can also use the narrower latitude to your advantage if you want a more high-key washed out look, which is what slight overexposure will give you. Chrome films have to be exposed correctly, as there is less latitude than a C-41 color film. However, when you see your transparencies that are properly exposed, you will appreciate the magic that the chrome films can produce.