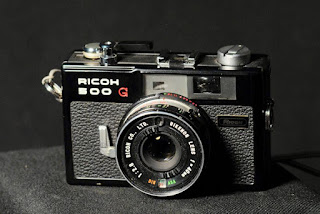 There are some camera form factors that are appealing, and despite there being "better" options, many of the  1970s 35 mm compact range-finder cameras are really quite good, and especially the models produced by Riken Optical in Japan, better known by the name Ricoh.  I was first turned onto the compact RF cameras by Steven Gandy's Camera Quest pages.  He's done all the home work, so take a look at his information. Over the years I have owned/used a variety of compact RF cameras, ranging from the Rollei 35 to the Canon QL17.  When you go compact, there are compromises that have to be made.  In the case of the Rollei, it's really a guess-focus camera, but the lens quality and build is superb.  The Canon QL17 is a great compact rangefinder, so long as the electronics work.  Otherwise, it's a doorstop.  In between are Olympus models,  such as the Olympus RC and SP, which are very well-made, have excellent optics, and are very classic in their styling.  There are also the very compact Konica C35, the highly-regarded Konica Auto S3, and the Ricoh 500G and 500GX cameras.  The Chinon 35EE is very similar to the Ricoh 500G, and whether it's because of shared manufacturing, copying, or other reasons, there has always seemed to be similar models of Ricoh and Chinon cameras, as well as Cosina, with their Compact 35E.  I'll leave those for the reader to look up, as chasing the information online is a lot of fun. 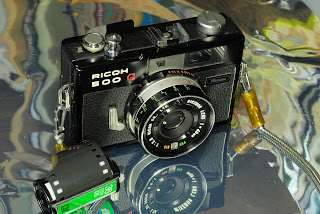 I have owned a Konica C35, and I feel it's one of those under-rated cameras that produce better images than they should.  Most of the models listed here have 38-42 mm lenses with a maximum aperture of f/2.8. B, and a maximum shutter speed of 1/500 sec.  No built-in flash, but the do have a hot shoe, and flash sync at most speeds.  A few even have a pc socket for flash.  My perfect "camera" has either shutter or aperture priority with manual over-ride, a decent rangefinder, self-timer, cable-release socket, tripod socket, and B mode.  The camera that fits that specification is the Ricoh 500G.

The Ricoh 500G dates from 1971-75, and features the typical CdS exposure metering in the rim around the lens, which enables the use of filters and accurate metering.  The camera focuses from just under a meter to infinity, so yes, it can do portraits. It has a 40mm f/2.8 Rikenon lens, shutter speeds from B, and 1/8 to 1/500 sec.  It can be shutter priority exposure or completely manual (and an M shows in the viewfinder). Aperture ranges from f/2.8 to f/16, and can be manually set or chosen by the camera under "A" mode.    The front filter ring takes 46 mm filters. It operates VERY quietly, as one would expect from a non-motorized manual RF from the 1970s.  I happened to have a case of GAS a few years ago (no, it's not the only time!) and after seeing an all-black 500G, I found one on eBay that was at a decent price (The chrome model is more common).  I had to redo all of the foam on the film door, but it was worth the effort, as the camera operates beautifully and I am happy with the images.   You can find these cameras on eBay for between $25-$75.

What is so great about these cameras is that they are well-made, metal-bodied, and have no quirks in operation.  I don't use my 500G a lot, but it has a place in my camera bag, and easily fits into a jacket pocket.

Here are a few images from the camera.

Posted by mfophotos at 9:32 AM