On Saturday, my friend Abby Alvarez and I went for a drive into NW Ohio, driving first to Findlay, and then to Mt. Victory, and back to Kenton, with many small towns in between. I think of such trips as fishing expeditions, one never knows what the catch will be. First of all, Findlay grew a lot during the late 1800s when petroleum was found in the area. It's the seat of Hancock County, and Marathon Petroleum still has a commanding building on Main street. However, there is a manufacturing industry in the area, and unlike many Michigan towns, it seems to be diversified in its economy. There are many really nice homes on the main streets -- some very beautiful Victorian painted ladies, and those alone call for another visit. We arrived in late morning, and parked on a side street after driving around a bit, to see where we should start out with our cameras. We walked across the street, and Abby spied some cameras in a shop window, and I noted some collectible-type things inside, as well, and then I recalled that Matt Marrash of the Film Photography Project had interviewed a woman in Findlay. I had no sooner had that thought when a woman came out of a shop next door, and started talking to us, and opened the door of the place we were looking into - it was her! Leslie Hunsberger, herself. We had a good laugh about that and that we have both been interviewed on the Film Photography Project's Podcast. It was fun discussing photography with Leslie, and how young people are taking up film photography. Leslie consented to being photographed while holding her favorite Polaroid camera (which she did use on the street that day). 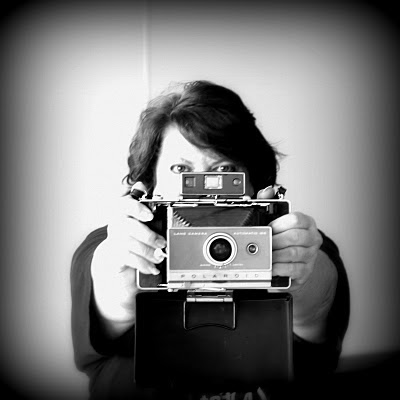 After that, Abby and I walked the back alleys, and streets in search of subjects, which were abundant. I mostly shot with my Nikon D90, but also used my Nikon N8008 with XP-2, and my Holga 35BC with XP-2. There were lots of interesting details, some odd buildings, signs, and in general, many new things to shoot and add to our respective collections of images. As the day wore on, we sought lunch, and had a good one at Logan's Irish Pub. As we traveled about, I kept seeing murals on brick walls in every town that we explored. Some are very complex, and I photographed every one I saw. That could obviously be a theme for a show all by itself. 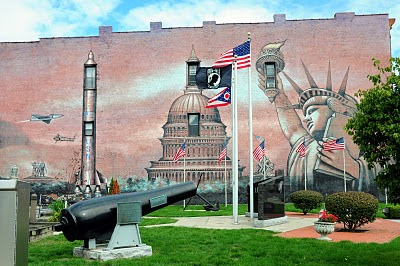 The Veteran's memorial in downtown Findlay. 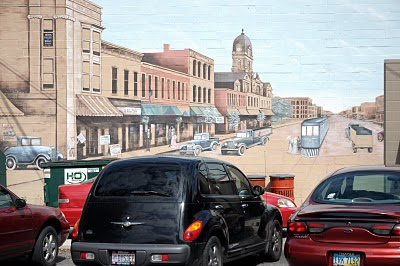 The back of a bank in downtown Findlay. It's almost hard to tell where reality begins. 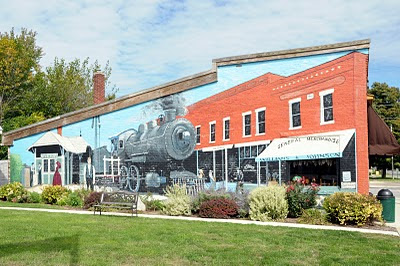 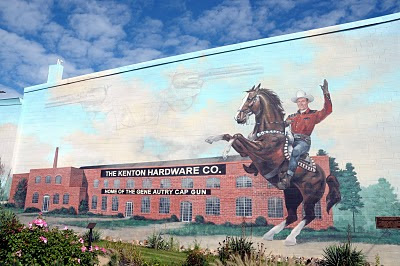 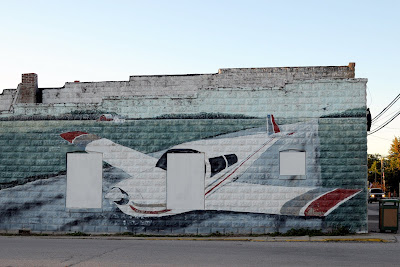 Late in the day, and almost sunset - we were driving back and saw this in Oakwood, OH -- a bar called the Landing Strip (not to be confused with the strip club near Detroit of the same name!).

There is a lot more to show from this trip to NW Ohio, and that will have to wait for part 2. Be ready for some hardware images :)