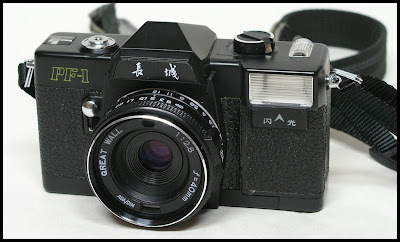 Back in early July I won an auction on eBay for a new Great Wall PF-1, paying $59 for it. I was actually surprised that I got it at the starting bid, as they routinely sell for about $100 new. Considering that Dianas and such go for about $60, it's a pretty good deal. One might wonder why I would bother buying this camera which features:
-One shutter speed (I think)
-Non-interchangeable lens
-Cheesy pop-up flash
-Suspect manufacturing quality
-Optics by who knows
In short, a crappy SLR! Right up my alley! Since receiving it from Ultrafine Online (and yes, they are still selling them on their website) in July, I have been shooting with it, getting to know it better, and figuring out its little quirks. The camera is actually a copy of a Fujica ST-F from the mid-1970s, though I suspect the Fujica actually has a metal chassis, not all-plastic like the Chinese copy. 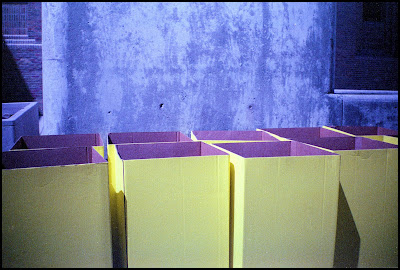 I did some searching online to see who's been shooting with the PF-1, and found a few galleries on the Lomography site and some on Flickr. Not a whole lot, but the results didn't seem too bad. The PF-1 features a thumb wheel to advance the film, like a cheap P&S, not an SLR. Actually, it works quite whell as the operation is pretty smooth and not noisy. The camera requires 2 AA batteries for operation, for the meter and the flash. The metering appears to be a CdS cell on the front of the lens bezel, much like rangefinders from the 1970s. There are three adjustable ISO settings - 100, 200, 400. The lens is a 40mm 2.8, with a min. aperture of f/16. There is a green/red LED for the metering, which seems to be accurate enough. With a fixed shutter speed of 1/60th second (which seems pretty slow, as I would think that 1/100 would have been a better option), the PF-1 probably works best with ISO 100 film. I recommend a neutral-density filter for ISO 400 film in bright sunlight. The front of the lens takes 49mm filters, offering up possibilities for close-up, diffusion, polarizing, red, and any other filter that can be used, depending on film and what you want to do.

My only real peeve about the PF-1 is that one really has to be careful when loading the film -- make sure that the film is pushed into the slot on the takeup spool as far as possible and that the film winds around before you close the back door. It's possible for it to simply slip off and slide around inside if there isn't a positive capture. It could also be a a manufacturing defect, with not all cameras being as quirky. Once I realized how the film leader has to be "properly" inserted, my winding problems went away. The camera has a split-image center circle which greatly aids in focusing. To use the meter, there is a silver button on the front that must be pressed while adjusting the aperture. To use the flash, push the front of the flash up, and engage a lock on the side of the lens that changes the aperture according to the distance focused on. This is much like the GN-Nikkor for the Nikon and the Canon QL-17, when using the matching flash unit. There is a tripod socket, too.

The camera comes in a box with an "ever-ready" case, neck strap, lens cap, and instructions in Chinese and "English." You can go to the Dot-Line website and download a pdf of their manual for the rebadged Aviva PF-1. It's quite good.

I loaded the camera with Tri-X for the first go-round, and many of the images were overexposed to some degree. My next roll was Gold 100, but I goofed on the film loading and had numerous double exposures, and a half-blank roll. Roll number 3 was respooled b&w, and the film pulled off the end of the roll when I wound one last time, and I opened the back... uh oh. I have not developed that roll yet. Roll 3 was Konica SRG 160 that was LONG expired. I shot it as ISO 100, and got some nice grainy, muted images (see below).

The last roll was Gold 100, and it fits very well with this camera when outdoors. Sure, it's a cheap SLR with a fixed lens. It's fun to use, unassuming, and I like most of the results that I have gotten with it. I wish it had a "B" setting and a hot-shoe, and all would be okay. It does have a cable release socket, plus a locking tab, so the shutter won't fire accidentally. Is it worth $60? Sure is. Considering what a really plastic camera is going from the Lomography folks, this camera is a steal. A pretty simple SLR that would be perfect for experimenting with, and adding various odd lens filters to see what happens. There is a photographer on the Lomography site that shot a bunch of nudes with his PF-1. Sort of strange, but if the models didn't laugh at his camera, then all is okay.

Should you buy this camera? Sure. It's a lot of fun. I even created a group on Flickr for it.

A rather complex history in fact. The Fujica ST-F was the deluxe model with the CdS meter. The simpler version was the slightly earlier Hanimex Reflex 35 Flash which is reputed to be the first ever SLR with a built in flash. They have a 'gate' shutter - the mirror itself acts as the shutter - in the same way as an Exa but rather more basic. The Hanimex one also shows up as the Naigai SRF. There is some confusion about the year of production - 1975 or 1979. The Fujica version also shows up as the Aviva PF-1, Yumica RFX-1 and Bell & Howell RFX-1. They all had the same 40mm lens, the same spec. were all made by Japanese company Sedic who specialised in cheap, plastic 110 cameras. The Great Wall is clearly the fancier version as it has the CdS cell in the lens and the flash ready light on the top left. The originals don't appear on ebay that often, in any of their names!

Wow! Thanks for that bit of history. It is amazing how convoluted camera manufacturing and branding can be!
Mark

The other twin to this camera is the Continental TXL. Just got one off of Goodwill for $6.98, but the shipping was $13.89. It's missing the little placard under the flash, and only one of the aperture blades works. But everything else seems to be okay, and I like the Guide Number set-up they use. I'll have to open it up to see if I can get the aperture blades back in order.

Well, I opened it up to fix the aperture blades, and that was a waste of time. There actually is only one. Can't wait to see what kind of bokeh this thing has.

It has an interesting construction, and as soon as I process the photos, I'll post them on Flickr.

The photos of the teardown and reassembly are now up on Flicker at http://flic.kr/s/aHsjCUYH28

It's not a hard camera to work on, but there are a few surprizes.

Thanks for the link! Very interesting project, and I hope that you get some good shots from it. :)

Finally got the photos processed. After looking at them on Flickr, like a lot of my stuff, they look better than they do on my screen before I upload them. But then I'm using the Windows Explorer in XP to look at them, so that may be a factor. I posted them with uncorrected, and corrected versions so you can see the difference best by running the slideshow. I can't complain for something I only paid $6.95 for.

The Hanimex 35 Reflex Flash is a different camera made in Japan, and was also sold by Naigai as the (first?)SRF, and the SRF Panorama. Naigai was not a manufacturer but a Japanese distributor. Sedic may (or may not) have made them.

The Continental TLX, Yumica RFX-1 and the (second?) Naigai SRF were made in the early 1980's in Hong Kong. The Great Wall PF-1 and the Aviva PF-1 were made in China in the mid 1980,s. None of these were made by Sedic, which seems to have disappeared (in Japan) around 1980.

The Great Wall PF-1 and its Hong Kong and Chinese made siblings were probably made by the Great Wall Plastics Factory which also made the 'Diana' series in the 1960's. Note that all of these cameras have a CdS meter.

The first all plastic SLR and the first with a built in flash was probably the Hanimex RF35d which some sources say was launched in 1978. This is a different model again, but apparently also with the "mirror shutter" which varies both exposure time and aperture together in intervals of about 1.5EV.

Whilst some sources say that the Hanimex 35 Reflex flash might have been made by Sedic, equally it might not. Sedic was a maker of small, relatively simple 110 cameras. Hanimex had trading relationships with Fuji, Mamiya and Chinon (as well as Sedic and others) and it seems unlikely that it would have needed to commission a relatively small and inexperienced company to build it.

One Japanese website claims that the idea for the Hanimex 35 Reflex Flash was the brainchild of the (unnamed) managing director of Sedic, but if the RF35d preceded it, then that seems unlikely too.

The Hanimex RF35d, the Fujica ST-F and the Hanimex 35 Reflex Flash can be seen as a progression.

The RF35d is an SLR with a fixed 45mm lens, an independent aperture, and (probably) a very simple mechanical shutter tripped by the mirror. "B" when it is down "I" (instantaneous) when it hits the up position. The Instantaneous speed is about 1/60th.

The Fujica SR-F has a mirror with a trailing plate which provides both aperture and exposure time by the size of openings in it. It has quoted "shutter speeds" of 1 - 1/750 second but no "B".

The Hanimex 55 Reflex Flash is a much simplified version of the Fujica, with the exposure times quoted as 1 - 1/300 second but no "B".

Fuji, Hanimex and Sedic had a close inter relationship in the late 1970's and it is possible that Sedic had a hand in assembling parts made by Fuji as a means of cutting costs. Sedic went out of business in the early 1980's.