I had thought that I'd covered my trip pretty well, but realized that I hadn't included any FILM images. In addition to the D90, I shot XP-2 film in my Nikon N8008 and Holga 135BC, and Tri-X in my Hasselblad. I haven't finished the roll in the Holga yet, but here are a few images from the Nikon N8008 (by the way, it's a highly capable AF SLR that easily uses and meters with manual lenses, unlike the other "non-Pro" AF bodies from Nikon -- and they are about $30 at KEH, run off 4 AA batteries for a long time, and a great bargain...) We encountered this unusual cantilever-style parking structure -- the full frontal view at 24mm shows how wacky it looks. 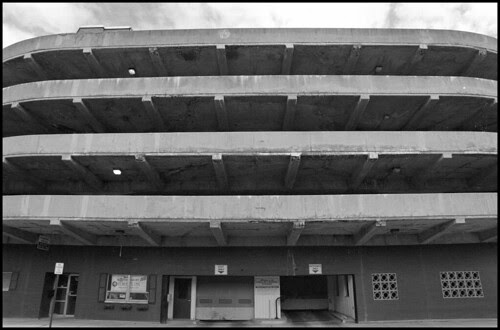 There are lots of alleyways and sides of buildings with some really vintage iron stairs- most of which are the same style, suggesting that there was some preferred vendor back in the late 1800s-early 1900s when these buildings were built. 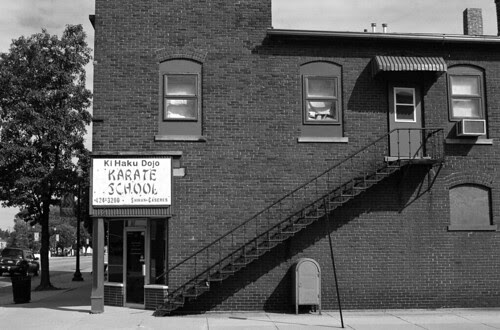 In one instance you can see where the lower part was removed and replaced with a cheaper, utilitarian style. This is a good example of how tastes and expectations change in a city, as well as how much money an owner is willing to put into a property. It would probably be nearly impossible to duplicate the older style without spending a fortune. 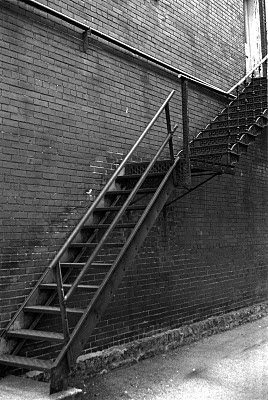 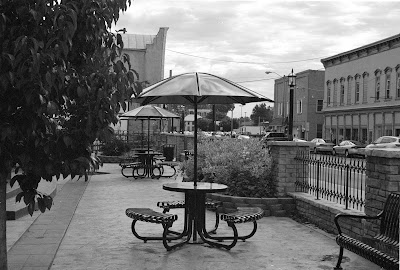 I like it when a city decides it is worthwhile to invest in creating gathering spots downtown. Having some tables and benches to encourage eating a lunch outside, meeting up with friends, or just watching the cars pass by is important to keeping a place lively. Of course, nobody was sitting there when I made the shot, but there were people there later during the noon-hour. It's nice to see a small city like Findlay with a growing arts community. For one thing, loft space is likely to be cheaper there than some other places, and if you can't go up, you can always go downstairs... 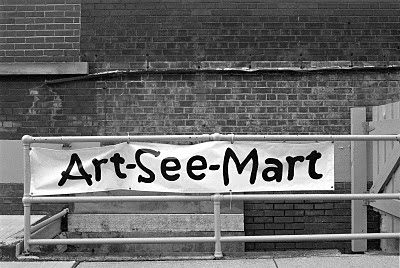 That concludes images from Findlay, and that makes 6 blog posts for the month of September -- am unusually large number for me. Next up will be an essay about Walker Evans and my homage project, as well as more vintage camera reviews. See you in October.
Posted by mfophotos at 1:00 PM