After we left Findlay, we took route 68 towards Kenton. I had heard that there was a major haul of photographic gear and images, books etc. there, and that the place might be open. But first, I decided we would go S to Mt. Victory, and check that town out, as I had photographed the mill there in 2005. We eventually got there, as I had forgotten that route 68 went to the SW, and we had to cross over to 31 from another road, bringing us into Mt. Victory from the South-- which was actually a good way to go, as the countryside there is quite scenic. Like I said, I last shot there in 2005, and got some great shots of the grain elevators there, as the light was perfect (June vs September!): 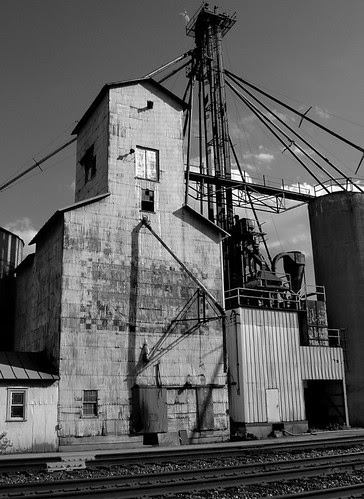 This time, the light was not there for good shots of the elevators, but there was more to see than that. It's a great place to go antique shopping, as there are many antique stores there with some pretty cool stuff. On the way N on 31 to Kenton, we stopped at a restored Gulf service station, owned by Mike Trout. He gave us a tour of the inside, and it was fantastic -- he has collected Gulf memorabilia for years, and he bought the dilapidated service station and fixed it up to store and exhibit his collections. It's based on a late 1930s station, and it is worth a stop. 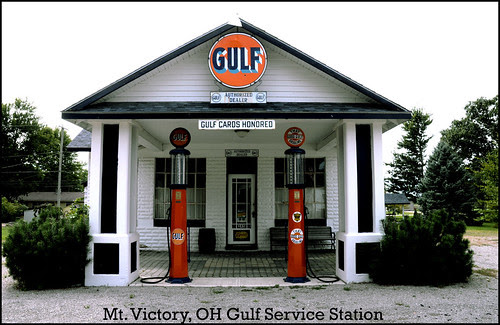 Finally, we got into Kenton around 3:30 or so, and quite by accident, found the building where the camera stuff was located. Abby asked two teens on the stoop of a building if they were from the area, and if they knew anything about a lot of camera gear.. it so turned out the the boy's father was the person with all the stuff, and he just happened to be behind the door in front of us! Serendipity rears its head once again. The story is that Dan Hausman and Tim Carrig bought out a large photographic collection from an estate in Pennsylvania. It filled an 18 ft truck and a van, which they, and others have been picking through in this building in Kenton. It's all in various states of condition, and of course, like many such "finds" - much of it is in untold boxes of stuff that could be nothing more than cheap plastic premium cameras, or maybe something quite desirable, such as a Leica. So, it's hard to look at anything without having to look through an entire box. Tim and Dan have been through most of it, and despite the apparent disarray of things, seemed to know what was there to some degree, and have probably already weeded out the real gems already. This reminded me somewhat of the John Naslanic estate that I helped with back in 2007, but even then, the Kenton stuff was small compared to Naslanic's hoard of photographica. I didn't go with any intent of buying anything -- I was just curious to see what was there. I did end up buying a Yashica J-P SLR (made in 1964) for $10, thus having something to show for the trip down there. A few shots of some of the stuff there... 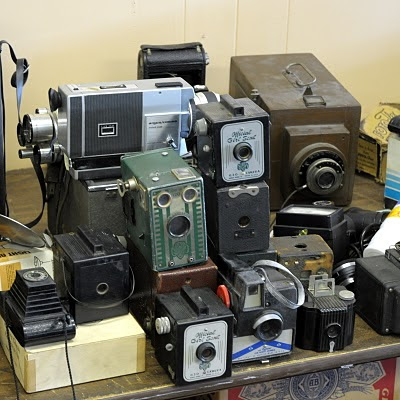 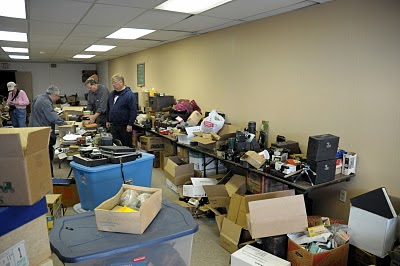 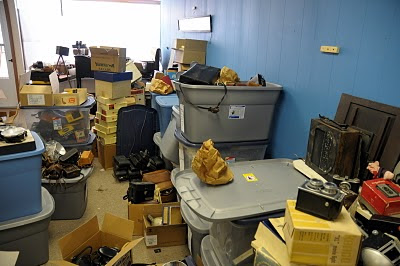 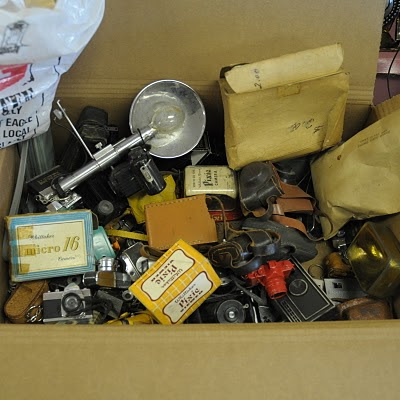 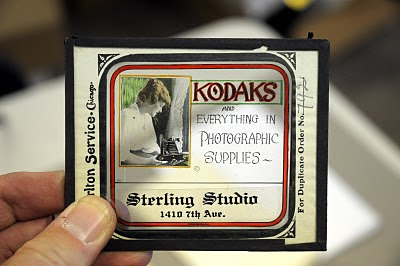 If you are interested in having a look, contact Tim via email at tim@golden-graphics.com - you'll need to let him know in advance, because he is not at the place every day, and it's not exactly a store. Well, that's all for now. I'll have a separate article on the Yashica J-P.
Posted by mfophotos at 1:11 PM

I love road trips, and I love old cameras, so I'm quite jealous you managed to bring the two things together!