A Week at the South Carolina Coast

I hesitate to use the word vacation, because I am retired, but it was a vacation from the kitchen renovation that is ongoing. We went to Murrells Inlet, SC for a week in mid-April, and it really was nice to do some traveling after a year of not doing any travel, other than day trips around NC.  Of course, we took the necessary precautions - mask up, and all that, and Bev was vaccinated, I had my first COVID shot, and Adrienne got hers shortly after we returned from our trip.  It was great to see the Atlantic, as it's been 22 years since I have been to the Atlantic coast. We left Weaverville on the morning of April 10, and arrived in the afternoon at our cottage that we rented for the week. It was little like going from Spring to summer-like weather.  It was great to have a real kitchen, as we have been making do with an ersatz kitchenette in the basement while our real kitchen is being completely renovated.  Even so, we ate dinner out a lot over the course of a week, as we had all that fresh and local seafood at the local restaurants.

First of all, Murrells Inlet is along what is called the "Hammock Coast," inland by the width of salt marshes from the Strand, a series of barrier islands that protect the marshes from the waves of the Atlantic.  Funny though, is seeing all those beachfront properties as easy prey to the effects of climate change.  At least there is less of an onslaught along the shoreline that is surrounded by the estuaries. 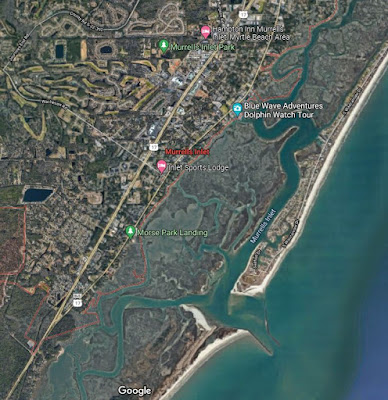 Our small cottage was perfect for our needs, and I enjoyed the quiet mornings there.  We were only a few minutes walk from the busy area with all of the restaurants, bars, and tourist-oriented places, yet we felt like we were in a very quiet spot.  I enjoyed the mornings with the sun casting shadows on the porch.

One of the places that we visited - three times, in fact, was Brookgreen Gardens.  Admission on one ticket is good for 6 consecutive days, and in light of how much there is to Brookgreen, it certainly makes sense.  For the history of Brookgreen Gardens, go to https://www.brookgreen.org/history-gardens.  Brookgreen Gardens has over 2000 pieces of figurative sculpture in a garden setting, and I have to say that I was wowed by what I saw. Aside from seeing several works by two sculptors well-known by Michiganders (Marshall Fredericks and Carl Milles), I was introduced to Anna Hyatt Huntington's amazing work and many others. Of course, all this is in addition to the fabulous gardens and plantings, the Low Country Museum and the zoo. I spent many hours just walking around and loving the Tillandsia (although it's often called Spanish Moss, it's not Spanish and it's not moss - it's an epiphytic Bromeliad) hanging from the Live Oaks (Quercus virginiana).  To me, those trees exemplify the deep South, and with those long, arching branches, they provide a mysterious and languorous scene.  They also support other epiphytic plants such as lichens, mosses, and ferns. I photographed the hell out of them, seeking ways to convey that sense of wonder and place that they provide.  I'll know if I succeeded when I develop the film.

On the other side of Route 17, across from Brookgreen gardens, lies Huntington Beach State park.  This parcel is where the Huntingtons built their winter retreat, which Archer Huntington called Atalaya. He had a passion for Spanish history and literature, and Atalaya was designed to look like the coastal forts of Spain. It's now called Atalaya Castle, and is a shell of its former residence. Although I enjoyed walking around and through it, it seems a melancholy place. However, it provided some great photographic subjects, which I also hope come out the way that I saw them.  The beach area is large, and the North end of the beach is the best place for photography and wildlife viewing.  The south end is more managed for typical beach and camping activities.


We also spent an afternoon in Georgetown, the third-oldest city in SC, incorporated in 1729. The historic district is a nice walk, and there are lots of beautiful old houses on the National Historic Register.  Georgetown is the second-largest seaport in SC and has several large industries. I did enjoy seeing that there is an old theater there, the Strand, which hosts theater and no longer shows movies.

We ate one meal at a restaurant every day, usually dinner. My two favorite places were the Inlet Crab House - a small place that seemed to cater more to locals, and the Hot Fish Club - which is a big place that offered up some of the best meals I have ever had.  All of the places around Murrells Inlet feature seafood, and a lot of it is fried.  That's why the Hot Fish Club was so excellent - there are many non-fried options to choose from, and we ate there two nights. We ate lunch at Wicked Tuna one day, and I had the most amazing shrimp Po'Boy ever.  I was also introduced to She Crab soup, which I tried at two different places, and it's a luscious mouthful of buttery crab meat and roe. Graham's Landing had the best version. I also found that Grouper was my favorite local fish.

Okay, this IS a photography blog, not a restaurant review, so I'll list what I brought along for this trip. I decided that my Pentax 6x7 wasn't giving me enough exercise, so I packed it and several lenses into a backpack. I also brought my YashicaMat 124, and Holga, to round out the medium-format section. Imagine my chagrin when I went to load the P67 and found that I had left the take-up spool at home.  I wasn't going to ruin a roll of film just to have a take-up spool, so I waited until I finished up a roll in the YashicaMat to transfer it to the P67. The Holga went along for many of the trips.  The 35mm camp was pretty straightforward - Nikon FM3a, with a spare Nikon FM body, in case I needed it. For lenses I brought the 50mm f/1.4, 28mm f/2.8, 85mm f/2, 105mm Micro-Nikkor, 35-105 Nikkor zoom, and the Lensbaby Pro Optic 35. I added the Horizon 202, and shot about half a roll of film with it. The Yashica Electro 35 CC was a constant companion,  and I also brought along two 35mm toy cameras to round things out.  The only digital camera aside from my iPhone was the Lumix DMC-LX3, which I did use a bit.  Overall, I shot 8 rolls of 120 and 16 rolls of 35mm over the course of a week. That's a lot of medium format for me to shoot, and I used the 55mm lens on the P67 quite a bit.  Most of the film was b&w, but there was enough color to keep things interesting. 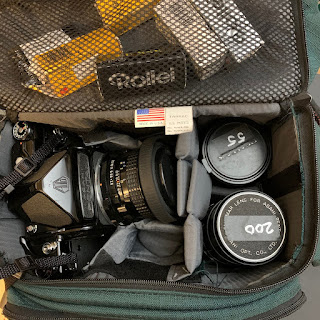 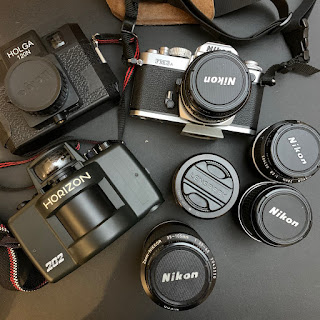 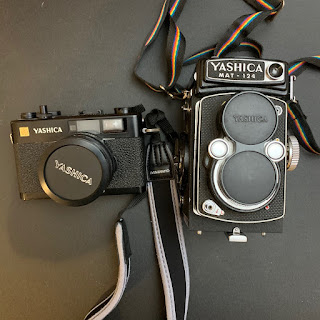 I'll start developing the film this weekend, and I am looking forward to sharing the results.  I'll be in Pittsburg at the end of the month, and look forward to photographing there again.

All of the images shown in this post were made with my iPhone XR.

That looks fantastic but by reading the tail of your story also a back breaking trip with so many heavy camera's. Still nice work.

Just found your blog. You have beautiful Black and white pictures which I enjoy seeing esp morning on the porch, live oaks and the dead tree stumps (?) in Beach state park. My partner is into photography too so I can imagine the pack of equipment you have to carry to get the great pictures.