KEKS Camera is a Taiwan-based company that produces the KEKS light meter, an attractive shoe-mounted light meter that's been getting some attention online. I was checking out their website, and saw something else that I figured would be a neat little item - a body cap with a 30mm f/10 lens mounted in it for $30. So, I place my order on March 18, and the package (envelope) arrived yesterday, April 5.   I'm sure that you are now wondering what the heck I'm talking about. 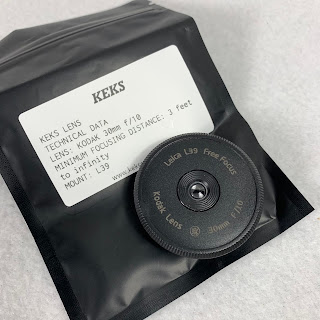 What is the KEKS body cap lens?

Typically, I have seen body caps turned into pinhole lens mounts for SLR cameras. That's pretty easy as a DIY project, and of course, there are commercially-made ones available. There are also pancake lenses that are very thin, made for M 4/3 cameras in the digital realm. The KEKS body cap lens is neither of these. It's an actual body cap with a 30mm f/10 lens from a Kodak single-use camera at the center.  There is no adjustment of any sort  except the shutter speed of the camera. The lens focuses from about 3 feet to infinity, and as you should expect from a single-use camera, the center is fairly sharp, while the outer edges of the frame are out of focus.   The idea is pretty good -- and because the distance to the film plane is shorter than with an SLR, the body cap lens is sold in only 4 mounts - Leica L39 thread, Leica M bayonet, Fujifilm X (digital) and Sony E (digital).  I bought the Leica Thread Mount (LTM), as it would fit my Zorki and my Canon 7 rangefinders.

As you can see, there isn't much to this lens, but I thought it would be something fun to play with.  The shallow profile makes the camera seem quite svelte.  I mounted the lens on my Zorki 2c, and loaded a roll of Fomapan 100.   Since the aperture is fixed at f/10, I shot at 1/250 sec in full sun, and adjusted accordingly in other conditions.   I just estimated the exposures and didn't bother with a light meter, as I strolled around in Montreat, NC, which is near Black Mountain.  As this lens makes the camera basically a point-and-shoot, I didn't worry too much about the framing on the Zorki.  I probably could have put a wide-angle optical viewfinder on the cold-shoe, since the tiny Zorki viewfinder isn't much help.

I developed the roll of Fomapan 100 in D76 for 7 minutes last night, and scanned the negs this morning on my Epson V700.  Once I looked at the scans, I could easily see that the lens performed pretty much as I expected - relatively sharp and contrasty in the center, with the image becoming progressively softer towards the edges.  Not a bad look for the way I shoot, but if one is expecting sharpness all around, this $30 gadget is not for you.

Here are some results from yesterday's shooting. 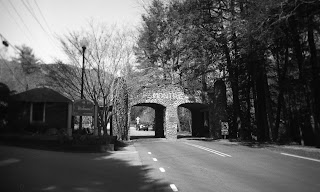 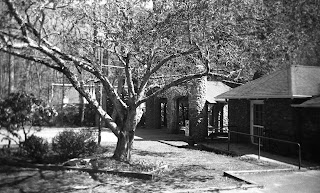 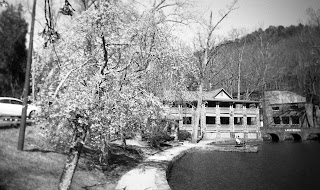 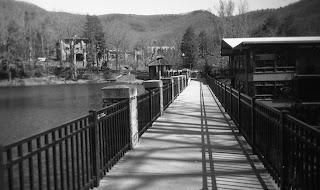 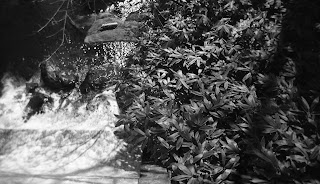 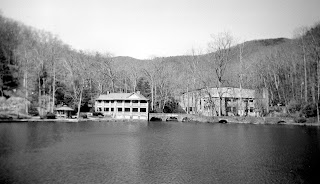 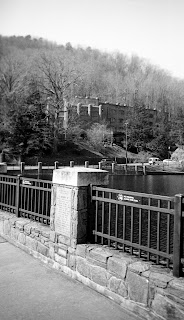 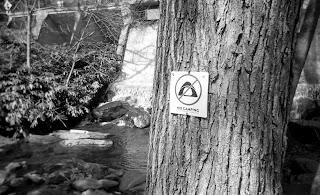 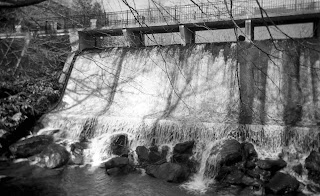 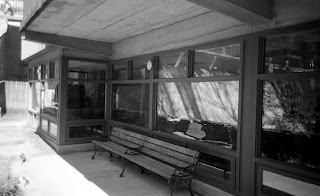 Is there some possibility of an EF-mount?

Since this has a very short distance from the lens to the film, it won't work with SLRs, but I really don't know what the mirrorless options would be. You'd have to ask KEKS.

Hey! Thanks for this very useful review and the sample images!