The Magic and Allure of Toy Cameras


If you have been following this blog for a while, you have probably seen a few recent posts about 620 and 120 low-fi cameras.  Whether you want to call them toy cameras, crappy cameras, low-fi cameras, or plastic fantastic wonders, is up to you. I’m sticking with toy cameras, because it’s a pretty simple term, but also a bit misleading.  To some, the "toy camera" conjures up a child’s toy that doesn’t really take photos, sort of like one of those Fisher-Price cameras with the rotating images.  That’s not what I am talking about here, or in my new issue of Monochrome Mania #3, "The Magic and Allure of Toy cameras." These are cameras that lack a lot of the controls that we typically use in our photography, or have at best, a reduced amount of functionality.  That puts box cameras, plastic brownies, Dianas, Holgas, faux-TLR Duaflexes, and a bunch of other simple cameras under that umbrella. That lack of precise control is what makes them alluring, and you can make magic with them.

The work for this latest zine actually started in 2007, when I typed up a partial manuscript for a book on toy cameras.  I had just hung my "Through A lens Softly" show at Pierpont Commons at the University of Michigan, and I was also in the planning stages of an exhibit by members of the Ann Arbor Crappy Camera Club, called "Cheap Shots." While I had been using a Holga since late 2001 and an original Diana a little after that, it wasn’t until the formation of the Ann Arbor Crappy Camera Club in 2006, that I really became encouraged by the use of these cheap cameras. Finding kindred souls just as the digital onslaught was underway was a propitious event that influenced my creativity and social circles.  While I am no longer living in Michigan, I still keep in touch with my Crappy Camera friends.

The manuscript sat dormant until 2019. As COVID-19 eliminated many of the activities that I had planned, I knew that working on a toy camera issue for my new zine Monochrome Mania would occupy my time.  What I soon realized, was that if I was going to expand the selection of cameras, I needed to go on eBay and purchase camera models that I once owned so that I could photograph them as well as run film through them. At one time, I probably had well over 250 cameras in my house in Ann Arbor, and over the course of a decade, sold off a lot of the ones that I had lost interest in, were shelf queens, or were just unrelated to my photographic interests at the time. Luckily, the market for cheap Bakelite cameras is not an expensive one, and I was able to procure ones that I felt should be in the issue. I limited the scope to medium-format toy cameras for a reason -- 120 and 620 film cameras offer the largest negatives, and one gets all the benefits of cheap lenses. There are quite a few models to choose from, as well.  I left out 127 cameras even though there were hundreds of models made. The film just isn’t readily available, and that made little sense to include them. I do plan on doing a follow-up issue with 35mm toy cameras sometime in 2021. 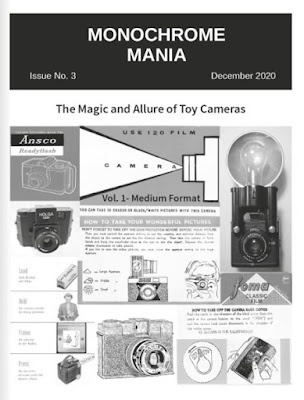 I don’t know how many hours I spent on writing and rewriting the text for this issue, but the text went through several iterations, and several people received copies to read for any errors of fact and readability. My wife Adrienne is my copy editor and found places where I needed to be more clear.  I was also busy trying out cameras and re-spooling 120 onto 620 spools into October, before I felt that I had enough cameras to include in the issue. In searching for examples from the various models, I ended up going through all my filed negatives back to 2002. It turns out that I had scanned very few of those older negatives because I had made prints of some of them for shows, and the early work really pre-dated the explosion of social media. I found myself scanning in hundreds of negatives, and in doing so, found a good many excellent images that I had forgotten about. I realized that I had nearly 100 negative sheets from my Holgas alone. Another plus for film, as looking only for digital files would have been a real difficult task.

So, the issue "The Magic and Allure of Toy Cameras" is now available.  It contains reviews of over 20 cameras with historical information, tips on using them, how to modify them, and a multitude of images taken with these cameras.  Every camera reviewed is one that I have shot.  With over 100 figures, this zine is filled with photographs in its 36 pages.  I think it’s one of the best pieces of writing that I have done, and people that have already received a copy are really enthusiastic about it.   At $12 in the USA (which includes shipping) it’s one of the best bargains you’ll ever find.
You can order from my marketplace on Square -- links are to the right, and if you live outside of the USA, there are additional order options.  Like all of my issues of Monochrome Mania, this is a real, tangible, in-your-hands item. I do not offer digital versions. If you love film cameras, or know someone that does, this makes a great gift for yourself or others!

Posted by mfophotos at 5:37 PM

Thanks so much for the blog articles and Monochrome Mania. I really look forward to
them and continue to learn much.

It seems we are much of the same mindset and interests. Grew up around the black bakelite camera's of that time, and have bought quite a few coincidentally as finances allowed. With every article or video posted, these once discarded items become rare heirlooms fetching enormous sums. Makes me wish I had cleaned out Kresky's camera counter back in the day, but $1 a weeks allowance never went far in the 60's. Comic books were all the craze, and I had it too. Going to order your offered article, as I'm intrigued by what you've written, as your proud of its content, I can't wait to see. Very best wishes, and happy holidays.