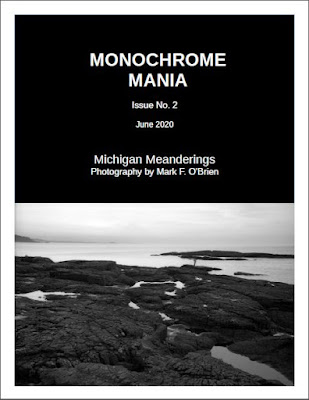 When I set out to produce my photography zine, I had a pretty good idea of what I wanted it to become. It's a creative outlet for me, as I had been involved in writing and publishing for my entire professional career, and also in my hobbies over the past 30 years. However, a photo zine is somewhat different  - yes - it's a vanity press, but it's a way for me to connect with people with photography, and to get my work in the hands of people at a price that's less than two lattes at a coffee shop.

I had already seen a number of other photo zines, and I can tell you that like anything in photography, they represent a broad range of interests and subject matter. However, they are all out there because people want their work to be seen, on terms that they can control.  We are lacking in print outlets for a lot of photography. The plethora of photography magazines that existed 20 years ago have been decimated by the digital tsunami.  In addition, print publications depend on advertising revenue to be able to publish and pay employees.  Subscriptions fall, advertisers leave, and the print publication goes online -only, and then it may cease to exist altogether.  I am not an online magazine reader.  I like the physicality of a publication, and that it can be read anywhere, as an escape from the ever-present smartphone and computer screens.

So, we now have many photographers that have something to say with their work, and  apart from some curated photography publications, nowhere to publish.  Back in the late 1980s, desktop publishing was just becoming a reality, with the software and laser printing that allowed press-ready work to be done by anyone.  That changed the way things like newsletters and small-market publications were done, not to mention the rest of the publishing industry. I was the editor of an entomological journal, and when I started, I sent physical manuscripts to the typesetters (which were typed in), and by the time I left that position, everything was a digital file, including illustrations, supplied by the authors, which were formatted for publication by the typesetters and sent to production. Now, the journal is only available online, and while I am sure that it saves the organization thousands of dollars, individual papers can be printed out by the user, if necessary.  So, what does that have to do with a photo zine, you ask? 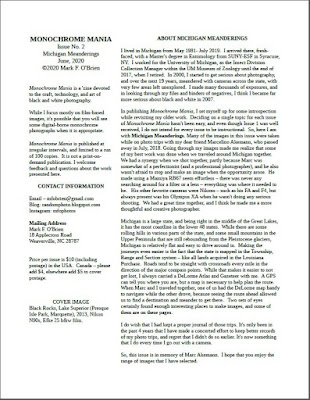 In my opinion, makers of photo zines are wanting to do exactly the opposite - those of us that produce photo zines recognize that the physical manifestation of an image may be as important as the image.  For those of us that use film - we already know that an image is a tangible thing. It exists whether we print it or not, as a negative or a slide. Yes, we can share it on social media, Flickr, and other online resources after we digitize it, but it may not have the same impact and audience that a print would have. People see an image for a few seconds on a screen, and click "like", and go on.  I think that those of us that produce zines want to do something more than that - we value the tangible, the permanence, and the physical attributes of the image.  Hence, we produce zines to showcase our vision, our interests, and to connect via the printed page.


I have had some requests for pdfs of my first Monochrome Mania.  It's still available in print. I'm not giving it away, but at $10, it's pretty cheap. No pdfs will be available, because they are made only to produce the printed copy.  I have so far limited production to 100 copies per issue, and when they are gone, that's it. You may think that only 100 copies is a small number.  If you had any image purchased by 100 people, you'd be really, really happy.  That's kind of how I look at it.  I produce Monochrome Mania as a sort of self-indulgent creative outlet.  This issue number 2 is very different from No. 1. Number 3 will be even more different, as it will be all about "Toy Cameras."  Like other makers of zines, it is a way to share my passion about photography, and get it into your hands at a very low price.

Issue Number 2 is Michigan Meanderings, and consists of photographs taken in various places in the state of Michigan. Having lived in Michigan for 37 years, I have visited most areas of the state, but seriously photographed places only since about 2006.  Some parts of the state have been shot extensively (Marquette, Ann Arbor), and I have lots more material for other future compilations. Nearly half of the photos in this issue were taken while my friend Marc Akemann and I were on photo trips together from 2008-2017.  I have dedicated this issue to his memory, and wish he were still alive to see it.  I am just about finished developing and scanning rolls of film that he left behind, and I have found a number of the rolls are from our joint trips.  That's a bittersweet experience, and maybe someday I'll be able to put some of them side-by-side with my images from those trips.

You can purchase Monochrome Mania No. 2 by going to the link on the right side bar, or by clicking here.

Thanks for making print media! I already have enough excuses to look at a digital screen, whether laptop or phone. I don't want to read a "zine" in pdf format if I don't have to. I admire you sticking to your guns and keeping Monochrome Mania just paper, for now. It's one thing if you sell the 100 and don't want to reprint and have a way to share, but besides cost, I don't get people asking for a digital version when a perfectly good print one is right there.

I'm happy to see that more and more folks are doing photo zines. But as someone who's done plain ol' zines for almost 25 years, it's definitely a different approach to what I'm used to. I'll try to put it delicately, and it's not directed at you, but I've seen quite a few folks price their photo zines more as "art objects" than publications. I get the fact that photography is art. But I feel that there has to be a balance. I want to support photographers, but my limited funds can only go so far. It doesn't exactly behoove me to purchase a photozine when the maker "sells" it by claiming it's "crudely thrown together" and slaps a $20 price tag on it, as I have seen once.

In any case, I dug the first issue of MONOCHROME MANIA, so I'll be getting the second.