Germany produced many different camera manufacturers and it's just amazing that so many interesting cameras were designed and manufactured there before and after WWII.   Apart from popular names like Leitz and Zeiss, there were many manufacturers that produced quite good photographic equipment.  Many of the companies started in the 1920s, and had mixed success after the end of WWII.  With the creation of East and West Germany,  things became even more complicated with naming and branding. With VEB Pentacon in Dresden and Zeiss moving to Stuttgart, there became two major productions of Zeiss-named cameras.  However, the Zeiss in Jena became Pentacon to avoid trademark infringements in the West.  Zeiss Ikon became the West German manufacturer.  On top of all that Zeiss Ikon incorporated a bunch of other companies in the late 1920s, such as Ernemann, Goerz and Ica.  It's a confusing mess without some sort of guide.  However, it bears repeating that if you want to delve into collecting German cameras, restricting yourself to Leitz is pretty boring, if not expensive.

Some German companies, such as Agfa, produced films as well as cameras.  Some, such as Voigtlander go back to the early days of photography (i.e., the Petzval lens was designed in 1840), and the names have outlived the German factories that made the photographic equipment.  The myriad of cameras that were produced in Germany in the 20th century is astounding, and if you look through a tome such as McKeown's Cameras (at over 1200 pages), you could spend a long time just looking at German-made cameras.  You'll see Adox, Agfa, Balda, Beier, Bentzin, Bilora, Braun, Bulter, Certo, Contessa, Dacora, Diax, Eho-Altissa, Erka-Kamerewerk, Ernemann, Finneta-Werk, Foitzik, Foth, Foto-Quelle, Franka-Werk, Futura Kamerawerk, Genos, Gerlach, Glunz, Goerz, Goldammer, Huttig, ICA, Ihagee, Iloca, Kamera Werkstatten, Kenngott, Kochmann, Krauss, Krugener, Kunik, K.W., Leidolf, Leitz, Linhof, Lippische, Mentor, Merkel, Mimosa, Minox, Montanus, Nagel, Neithold, Nettel, Orionwerk, Pentacon, Plaubel, Porst, Regula, Rietschel, Robot, Rodenstock, Rollei, Ruberg & Renner, Steinheil, Voigtlander, Vredeborch, Welta, Wirgin, Wunsche, Zeh, Zeiss,  and Zeiss-Ikon.  Some of them you have undoubtedly heard of, but others are  relatively obscure names outside of Europe.    The manufacturers Balda, Ihagee, Pentacon, Voigtlander, Welta, Wirgin, and Zeiss-Ikon produced a dizzying array of different cameras.

Wirgin began in Wiesbaden, Germany  in the 1920s and started producing cameras in the 1930s.  To escape the Nazi persecution of Jews, the Wirgin brothers fled Germany to the US  around 1938.  The factory was largely destroyed during the war, and camera production restarted in 1948, after Henry Wirgin returned to Germany and restarted the company.  The company went bankrupt in 1968.  Wirgin made about 150 different camera models, with a confusing number of similarly-named 35mm rangefinders and SLRs.  The company also made 16 mm subminiature cameras, 120 folding cameras, plate cameras, stereo cameras, as well as a number of zone-focus 35 mm cameras, such as the Edinex, which I am reviewing here.

McKeown's lists the early basic Edinex models as type 0, as there are typically no distinguishing names on the models until the Edinex 1 was produced in 1951.  The Edinex cameras are surprisingly small due to the telescoping lens tube, rim-set leaf shutters, and compact metal body that opens from the bottom for film loading.   They lacked a built-in rangefinder until the Edinex III appeared.  There is a tubular post on the top deck of the camera that accepts an accessory rangefinder.   My Edinex probably dates from about 1948-1950, as it has a 5 cm Schneider Radionar f/2.9 lens set in a Compur-Rapid rim-set shutter with T, B, 1 - 1/500 sec.   Focus is made by turning the front lens cell, which focuses from 3.5 feet to infinity.  The viewfinder is tiny, and not ideal for anyone wearing glasses. 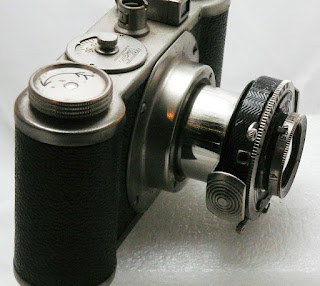 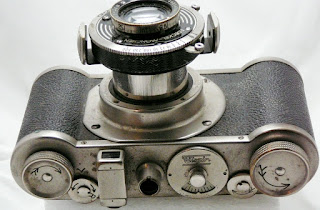 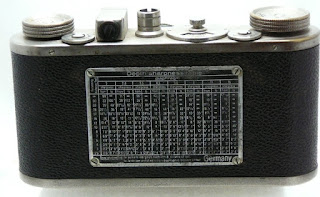 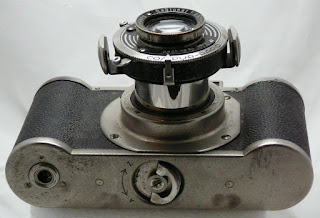 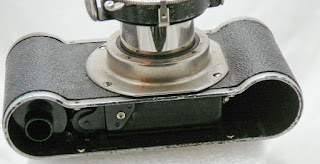 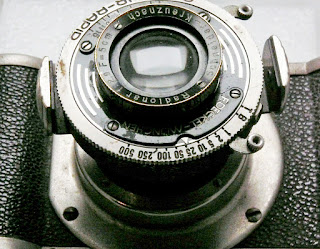 First, to load film in the camera, you rotate the release on the bottom plate, which comes all the way off. There is not much space between the pressure plate and the film transport, so you have to carefully load the film.  I had to tape the film leader into the metal removable -take-up spool and carefully guide it all into place.  To advance the film you must turn a small rotating disk to the left edge of the film winding knob. The arrow shows the proper direction, and once the film starts winding, release the small advance wheel, and the film will wind properly.  I found that the frame spacing is very generous, and varies from 4-6 mm vs. about 2 mm for typical 35 mm cameras.  The frame counter on the top is manually set.

Since there is no rangefinder in the viewfinder, I just estimated the distance and set the focus on the lens.  I could have brought a rangefinder, but I didn't.  I used sunny-16 for my exposure guide.  To shoot, you must pull out the lens away from the body, and the two very obvious metal knobs on each side of the front assembly are grasped for this.  Pull it out until it stops and rotate just a bit clock-wise.  Cock the shutter by moving the cocking lever (upper arm) until it catches.  The shutter release is the lower arm on the edge of the front assembly.  There is also a cable-release port.    It really wasn't that hard to operate, and is certainly much better than using an Argus A camera.    The full range of shutter speeds makes the camera far more usable with modern films.    I loaded the camera with a roll of Ilford Pan-F, rated at ISO 50.   To rewind the film, turn the small rotating wheel in the direction indicated  (R, clockwise) and turn the rewind knob.  There is no double-exposure prevention, so yes, the camera could be used for multiple exposures.


I  developed the Pan-F, and I am actually quite pleased with the results.  Despite being a bit awkward to use, the camera's shutter was accurate, and my focus was never off.  I shot it at the Biltmore Estate, and I think this 70-year old camera performed as good as new.   Perhaps there really is something to be said for simplicity.  No doubt that this camera is compact, and while it isn't going to win the award for elegance, it handles pretty well.  To me, the biggest deal-breaker is the bottom loading and the cumbersome film advance sequence.    However, the camera obviously beats the US-made Argus A series which use a similar lens arrangement and focus scheme.   It's remarkably smaller and lighter  than the Kodak Retina-1, which is of similar vintage.  The lens and shutter assembly of my Edinex and a Retina -1 are very similar. The Retina-1 likewise lacks a rangefinder, but does also have an accessory shoe for one.  Note that the Retina-1 was built by Nagel Kamerwek, so is also a German camera.

I think if you really want a rabbit hole to chase down, take a look at Wirgin Edixa SLR models.  So many different models, so many Wirgins!! 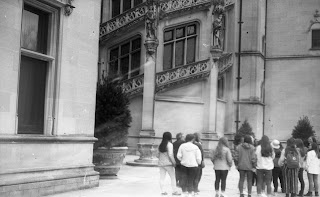 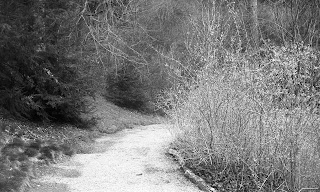 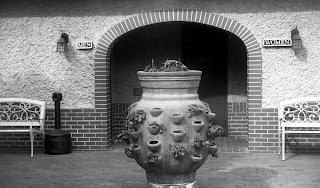 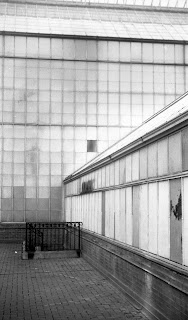 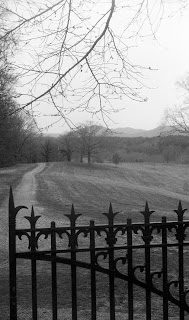 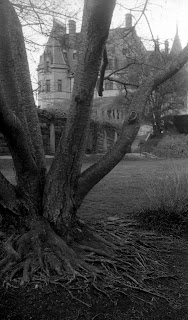 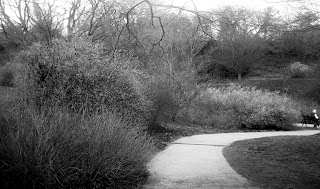 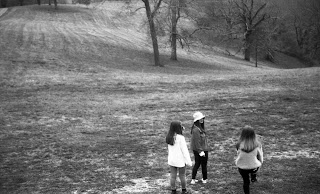 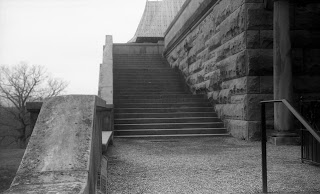 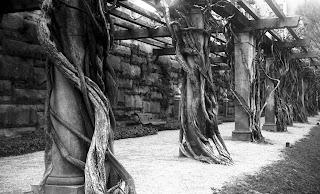 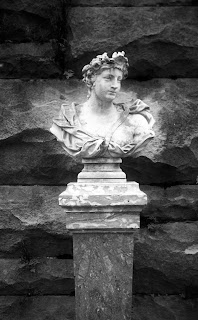 Posted by mfophotos at 1:33 PM