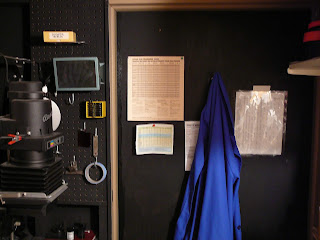 I thought I would share some thoughts about my darkroom, and what I hope for in its next reincarnation, as in a few short months it will have to be packed up for wherever its next home will be.

We purchased our current home in December 2002, from  Bill and Margaret Brudon.  It was a private sale, and it all came about because Bill had been a great mentor in photography to me, and we always enjoyed their home.  We moved a mile and sold the home we had purchased in 1984 and in the span of a few days, closed on two home transactions, cleaned the old house, and moved into our current home, which, because it did not go on the open market, was much like moving into your parent's old house.  My wife and I did a lot of cleaning and decluttering, and we never missed our old home once.  This house is a mid-century home with real plaster walls, cove ceiling in the living and dining rooms, red oak flooring (which is just now being refinished this week).  It also came with a 5x7 darkroom in the basement, fully furnished, since Bill was leaving that behind.  This darkroom allowed me to explore b&w photography as much as I wished, and I have spent many hours there developing film, listening to music, or more recently, The Film Photography Podcast, and WCBN FM, a public radio station at UM that plays an amazing variety of music. 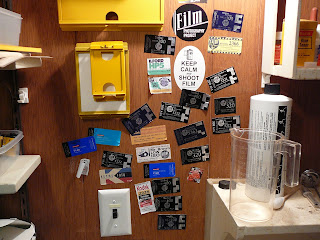 I have not printed a single b&w photo in the past 3 years, and I miss doing that.  I used to print a lot, and got fairly good results, but now I only print if I am doing a show.  That  seems a bit stupid in hindsight, but I really didn't want to be inundated with prints without a purpose.  I hope to change that in the coming years, and wherever our new home will be, it will have to have space for my new expanded darkroom.   I am torn as to take the darkroom sink with me, or leave it.  It's perfect for the space that it is now.  I'll have to wait and see how I feel as a real move approaches.

The walls on one side are paneling, and as you can see, cassette wrappers are stuck to it.  The other sides are masonite peg board, which had been painted black by Bill.  My new space will have no black walls.  This is a comfortable one-person darkroom. Put two people in there, and it's awfully close.  I want to be able to do film photography workshops in the future, so more space would be desirable.

This darkroom has performed well for two different photographers, and I very much doubt the next owner of the house will want it used.  Maybe it will make a good space for something other than photography, but I suppose it will get torn out someday.    A lot of "me time" has been spent there, developing, thinking, and isolated from whatever is going on outside in the world.   Those of you that have a darkroom will know what I mean.   It's not so much that one is isolated, but free from distraction to print and to ponder, to develop that next roll of film and still feel the magic that is inherent in the process, and to think about new projects and continuing old ones.

So, sometime in the next few months, I will be boxing all of the stuff up to take to a new adventure.  I have already divested myself of materials and equipment that I don't need or use, and while there will still be some junk to be tossed, everything else goes to NC with us. 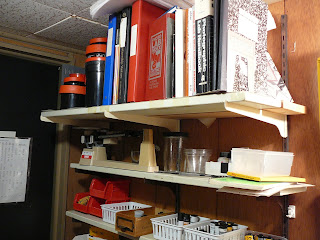 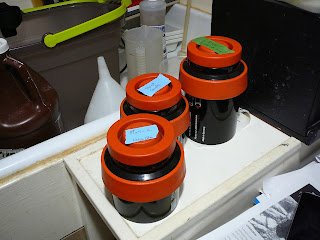 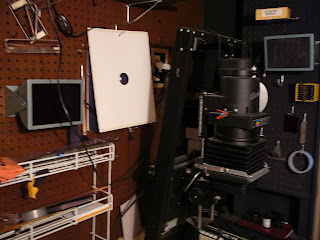 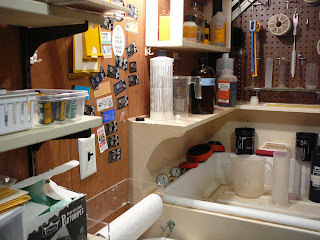 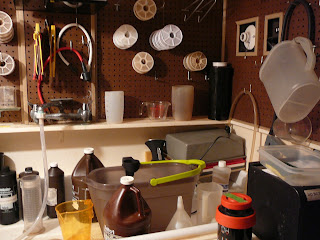 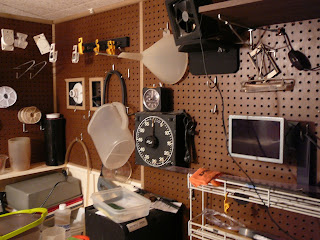 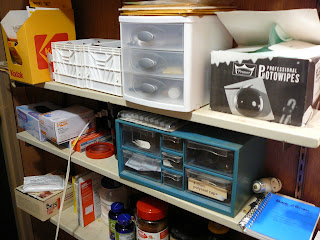 Posted by mfophotos at 9:09 PM

Are those Kimi brand photo wipes? I haven't seen those in years, except for the 1/4 box full I have left. Can you still buy them?

Premier brand. I probably have had that box 8 years or so! I think I may have bought it at Ritz at a closeout. Time sure flies!

Hang film spools on the wall ... why didn't I ever think of that? I'm an idiot. Anyway I, too, haven't print printed much in the past few years. I've also got stacks of paper that's been gifted to me. Though I also have that issue of "prints without a purpose", I'm setting aside negs to print. I plan to simply give the prints away to good homes. Anyway ... I vote you take your sink with you.

I just purchased somebody’s darkroom setup today. 2 beselers, sink, and all of the other odds and ends needed in a darkroom. I imagine it was bittersweet for them to see it go.