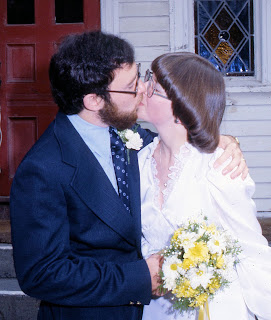 It's my 40th wedding anniversary. My wife Adrienne and I were still in college at SUNY-ESF in Syracuse. We married at 21 in Amenia, NY, her hometown. The reception was in the Amenia firehall, and it was a small (by today's standards) reception of less than 40 people.  Forty years later, we are still married, with many more years ahead.  I scanned in some 35mm slides last night and thought about the technology changes since 1978, and the fact that the same camera could do the same job today.  The film was Kodak Ektachrome. Adrienne's cousin, Chris Murphy was the photographer, and I think used a Pentax SLR. The slides are still easily viewed.  Imagine trying to find a digital file 40 years later.  You won't.  The physicality of a transparency or a negative is a quality that defines their existence, long after the event took place.  The beauty of photography is that it records memories better than our brains can fix them.  The sad reality that there is going to be a dearth of surviving images from 2002 onward, due to the digital avalanche.  Families record things on cellphones and rarely, if ever, make prints.  Phone goes dead, bye-bye-images, unless you have them backed up somewhere.  The other big difference, is that at our wedding there was one photographer, not 40 wannabe photographers with cell phones. The guests were enjoying the moment, not immersed in a cell-phone (which obviously didn't yet exist).

The great thing is that the Ektachrome slides have lasted as long as our marriage, and I have hopes that at 50 years, they will still be as vibrant as our marriage.

Posted by mfophotos at 9:02 AM

Mark,
Congratulations to you and your wife on reaching a milestone that few do (including me!).
You are spot-on with your comments regarding the longevity of film, my regret is that I did not print more of my negatives when I made them and now I can't remember where, when and what!!
Just the downside of getting older!
The photograph is lovely, my older Pentax is still one of my favorite cameras I reach for when walking out the door to shoot film.
From a longtime lurker in NoCal,
Regards,
David

Congratulations on your wedding anniversary and many more. This year will be 'only' eighteen years for me and the missus.
Can I play devil's advocate for a moment? I also love film, but I still have the photos from the digital camera I bought in early 2000. A Casio QV-2000ux. 2 megapixels! You can't compare the photos from that to 35mm slide film, but I can still look at those photos 18 years later and remember colleagues, friends, and my wedding. So it did its job. That said, I am careful about backing up and organising my photographs, both film and digital, so I think that I will be able to look back at my wedding photos on my 40th anniversary. But it's true what you say about most of the digital content in the world not surviving. Most people are not careful about their phone photos and if their phone dies they are going to lose everything. My father lost everything on his computer a couple of years ago and depended on me and my brother to send him (low quality) photos that he had sent us through email over the years. The prints from the 70s, 80s, and 90s in his albums were unaffected . . . .
Congratulations again.
- Marcus Peddle

Thanks for the comments! My pet peeve about digital files vs negative/slides/prints is out of concern that the easily identified physical aspect of images which do not need any intermediary device to view, makes them less likely to be lost (aside from any catastrophe) to heirs, etc. A hard drive or stack of CDs or DVDs is more likely to be tossed, lost, or forgotten or perhaps rendered inaccessible by changing technology. I certainly advocate backing up files -- which is extremely important. The beauty of digitization is that we can scan in the physical images and put them on the web, etc., but we still have that physical manifestation of the image somewhere. The people that don't make prints of their digital images will be someday wondering why they don't have family photos. Maybe that's not important to some, but the permanence of a negative or a silver print is well-established, and digital data...

I forgot to mention that I print everything that's important, especially photos of friends and family. I don't completely trust backups, negatives can get damaged even if they are in proper sleeves, and there is always the accidental and unnoticed pressing of the Delete button. ("Hmm, I was sure I had a selfie of myself fighting that bear.") With a photo album, I can sit in a comfortable chair and relive some memories instead of peering at negatives up against a window or going click click clock through a hundred different folders on my computer.
-Marcus Peddle