This of course, brings up the typical conversation, which goes something like this:  "Those Series E lenses aren't the greatest, but they'll do."   or, "The Series E 50mm is compact, but it's not very durable."  or, "That 100mm series E is nowhere as good as the 105mm Nikkor."

I'd like to address the mythology of the Series E lenses. First of all, I will concede that they are lighter, smaller, and are certainly not built like the "pro" lenses. Nikon glass for the most part, has been top-notch, with few exceptions.  The Series E lenses were made in the late 1970s and early 1980s to be smaller, lighter, and less expensive so as to bring options to photographers with less money to spend. They did not have the "bunny ears" to accommodate non-AI cameras, such as the F2, because it is a "pro" camera. So these are true AI lenses for the Nikon SLRs such as the FE, FM, FA, FG, and EM, and of course, AF cameras such as the F100.  The series of photos here illustrate the paired lenses such as the 50 f/1.8 Series E and the Nikkor 50mm f/2. I'll talk about each of them briefly.  I don't have the 28mm Series E lens, so that one will be left out. 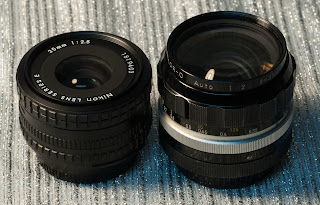 35mm
This focal length has often been felt to be the best for street photography -- just a little wider than 50mm, but also a good estimate of what our eyes see.  The two lenses here, the Series E 35mm f/2.5 is certainly much smaller and lighter (160g) than the Nikkor-O 35mm f/2 (285g), which dates from about 1965, and was AI-modified by John White much later.  The E lens dates from around 1980.  I have used the older lens a lot, and it produces excellent results, especially when stopped down.  It should be used with the matching 35mm lens hood, as that front element is a lot of glass, close to the front of the lens. The E version is reputed to be a fine lens optically. 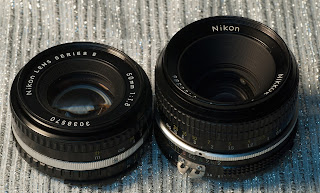 50mm
The 50mm has always been considered the go-to focal length by many photographers, and it's the lens that almost always came with your SLR, no matter the manufacturer.  Before cheap zooms became "kit lenses", these were the kit lenses.  There are a bunch of 50mm Nikkors, and while the f/1.4 is a desirable lens for indoor and low-light, as well as shallow DOF, the "standard" 50mm f/2 reigned from 1959 to 1979 in different versions.  The 50mm f/2 is renown for its relative flat field, close focus distance, and does well with extension tubes and bellows. However, it has a minimum aperture of only f/16.  The lens shown here weighs 210g.  In comparison, the E lens has a maximum aperture of f/1.8 and a minimum of f/22, and weighs 155g.  I have shot a lot with different E versions, and I will say that stopped down to f/4 and lower, results are fine. It IS compact, and in a camera such a Nikon FG, it makes for a good combo of light weight and compactness.  Is it a great lens?  I'll bet it depends a lot on your expectations and subject matter.  Don't dismiss it though. 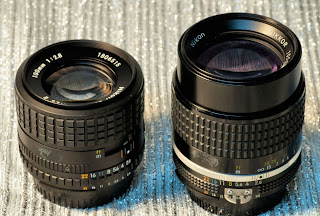 100mm - 105mm
I consider the 100-105mm focal length a good one for portraits, nature, and as it's a short telephoto, a good match with extension tubes for nature close-ups.  Even on the street, it's a good lens for isolating your subjects.  The Series E lens, 100mm f/2.8, has a very good reputation, and I shot the image of the Nikon FG and FM with their 50mm lenses with the 100mm E lens on  my Nikon D200.  The E lens is noticeably smaller and lighter than the 105mm f/2.5 Nikkor (220g vs 470g) with its built-in lens hood.  Both are excellent lenses, but I would say if you are going on a trip, the E lens will be appreciated due to its compactness and weight advantage over the 105. 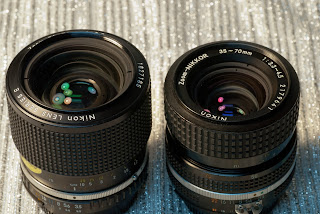 It was harder to compare the zooms, but the closest I can come to the 36-72mm f/3.5 Series E is the cheap 35-70mm f/3.3-4.5 zoom which features a zoom collar and a separate focusing collar.  Yes, there are other 35-70 zooms, but I have not tried the other manual-focus ones.  In this case, it's the Series E lens that is larger and heaver (380g vs. 255g).  I have shot quite a bit with my E lens, and while it is a constant aperture-zoom, I think stopped down to f/5.6 produces better results than wide-open.  It is a far better lens, in my opinion, than the 35-70, due in part to being a one collar zoom and focus.

75-150mm
I don't have a "twin" to compare to, but I have shot with this lens quite a bit, and results have been very good.  Pop on an extension tube or a 2T accessory lens, and it's great for flower close-ups, etc.  The lens weighs 519g, and is 12.5 cm long.  According to Moose Peterson (The Nikon System Handbook, 2000), the 75-150 was "the" lens for fashion work, especially in the studio. I consider it to be an excellent lens to have in the bag.

The beauty of the E lenses is that all take the standard 52mm filters, making filter use quite simple.  I recommend lens hoods for best results (I know it's a thing with me, but they help all lenses).
If you are going on a trip, carrying the 35mm, 50mm, and the 100mm won't be a big deal with a body such as the FG, FE, or FM.  Or, the 36-72mm plus the 100mm if you only want to carry two lenses.


I am not saying Nikon lenses are by far the best, because that is an un-provable statement.  The manual focus Nikkors have been around a long time, and I think the true value of a lens to me is -- does it produce an image that I am happy with, and does it work consistently?  While the E lenses have been saddled with the "not as good a build" statement, remember that these lenses are now over 35 years old, and most are probably working well.  You can chase unicorns for that mythical best lens, or learn to use your equipment and know how to get the most out of what you have.  That may seem hypocritical coming from a gear guy like me, but I see people arguing over the fact that a certain lens is better because it has an aperture of f/1.2 vs f/1.4.  If you NEED to shoot at f/1.2, it is the best lens to do that with, but it does not mean it's a better lens than the mundane 50mm f/2 Nikkor.

Over the years, I have accumulated quite a few Nikon lenses, and also sold off a few as well. I had a 180mm f2.8 ED lens for quite a while, and though it certainly is a very good lens for isolating a subject due to the shallower DOF, I found that the sheer bulk of the lens outweighed its utility to me, and sold it last year when I needed to fund a Pentax 6x7.  A zoom lens that I think is really very all-around useful is the 35-105mm f/3.5-4.5 Zoom Nikkor.  It can focus at around 10 inches in the "macro" setting.  If you had that lens and a 50mm f/2, you would be set for most things on a trip. 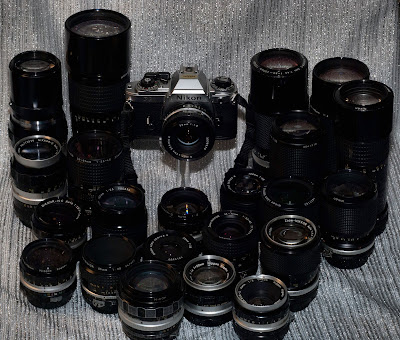 I'll close with this photo of my current stable of manual Nikkors, though I now see I forgot the 45mm f/2.8 GN-Nikkor, because it was on a camera.  I have multiple 50mm f/2 lenses, and I love them all, especially the older non-AI versions. They are superbly-made lenses.

Posted by mfophotos at 2:16 PM

I don't understand why people pooh-pooh the Series E lenses. The only one I have is the 50/1.8 but it has returned fine results from every subject at which I have aimed it. I'd love to have the 28mm and the 35mm versions. I'd give them regular workouts.

I think it's just camera snobbery. Like the Minolta MD series and the Celtic line of lenses, maybe the build may not be as robust, but image-wise, the same. Of course, there will always be naysayers on any given photographic subject, but in reality, the images produced by the E lenses are perfectly fine.