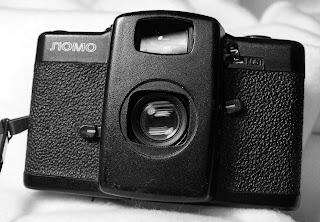 For all of the years that I have been a photographer, one would think that I would have owned a Lomo LC-A before now. Truth is, I have wanted one, but did not want to pay the crazy $ for what they were selling for in the US.  The newer models from Lomography did not excite me, especially at their price.  I wanted an original model. I have had many other "Soviet-made" cameras from Lubitels to Zenits, to Kievs to Smenas.  Lomo LC-As just didn't come my way, but that changed a few weeks ago, when Mike Raso handed me one.  "It might work, it might not."    I took it home, and put in 3 LR-44 cells, and realized that I had to adjust the battery terminal so that it pushed against the cells.  Voila! It worked.  I merely had to put some tape over the battery door to keep it shut.  I put in a short roll of Eastman 5222, adjusted the Gost dial to approximate ISO 200, and shot with it.    I developed the film last night, and here are a few of the shots from that test roll.  Overall, not bad for an automatic camera.  I took a few photos at night in the light of a Kroger parking lot, and am pleased how those came out, and overall, the camera performed quite well.
The size and compactness of the camera surprised me, as I had never owned one before.  I know that whole Lomo "shoot from the hip" thing is hyperbole, but one can take this camera anywhere and get something.   My overall impression is that I can see why the camera has been popular.   I'll do more shooting with it and see how it goes.

Here are a few images from the test roll.