One Subject, Many Possibilities

Those people that know my style of photography are never surprised when I am on a photo shoot - road trip and find me trying to decide which camera(s) to bring along on that particular day. We often hear the refrain "the camera doesn't matter." I beg to differ. The camera matters a lot. Whether I want to shoot with a toy camera, a Nikon SLR, film or digital, 35mm or 120 film, hell -- even a Polaroid, these are all choices that make the final image of any given subject a reflection of the camera and materials used to capture it. Here is a case in point:

Take one exotic vegetable that I have only seen previously on Flickr -- Broccoli Romanesque (actually a cauliflower), which I finally picked up at a local store. Could I capture its interesting quality? Apart from the obvious Fibonacci/Fractal connection, the broccoli head and the leaves surrounding it had great texture and possibilities for a still-life.

So, before we had the vegetable for dinner, I spent an evening photographing it with several different cameras set on a matte black backdrop and used one incandescent light for the light source.

Shot with the Nikon D70s and the 60mm macro lens: 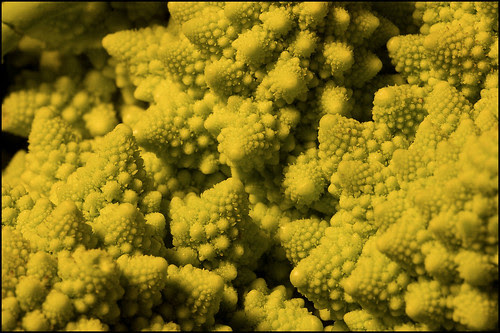 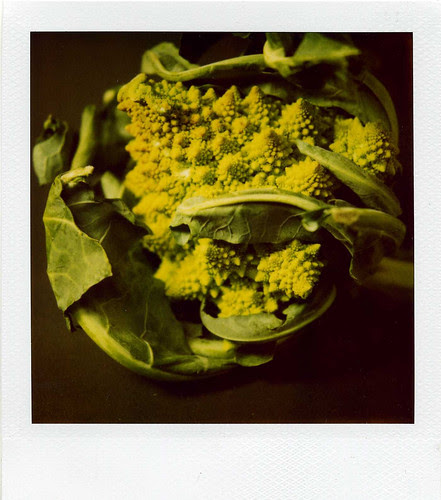 Using my Canon Powershot, and shooting in manual b&w mode: 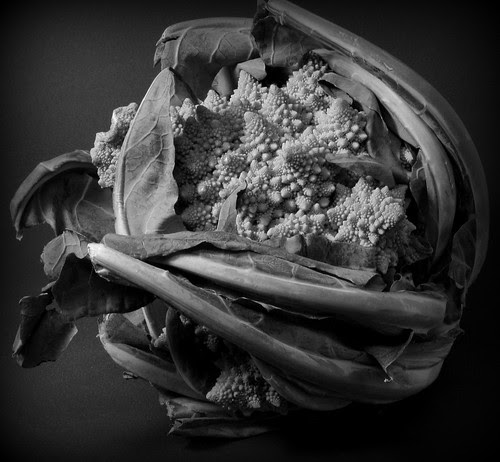 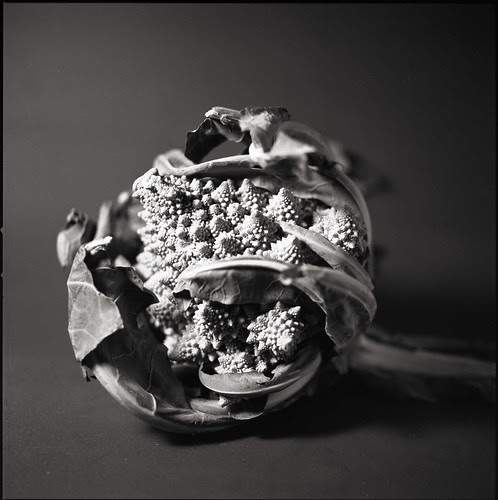 Obviously, each camera helped me create different images. I love the Polaroid image and the Hasselblad shot is very nice. So, I think this shows that the camera does make a difference, as does the person using it. Maybe the next test is to take the same camera, same subject, same set, and let a few different photographers shoot. Could be an interesting exercise!
Posted by mfophotos at 12:39 PM

I really think beauty is in the eye of the beholder, not in the camera. But I see your point. I can also imagine your wife nagging you with the blooming vegetable! Can I cook them now?!