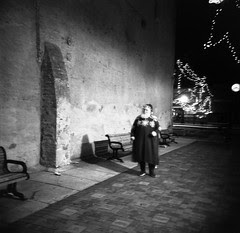 Last Thursday evening, my wife Adrienne and I joined a bunch of her co-workers at Aubrey's Saloon in Ypsilanti's Depot Town. I brought my bag with a couple of toy cameras to do some shooting later on, since I had yet to do my night photography assigment for the Ann Arbor Krappy Kamera Club. We had some beer and food, and said our goodbyes, and I went back to the car for my tripod. There is a really neat alley/park that looked good in the night light, so I set up my Holga and took one time exposure. Right afterwards, David, Will, and Connie came around the corner, heading for the parking lot. Will was dressed as Saint Nick from the party earlier in the day, and as I saw him there in the alley, I told everyone to get out of the way and for St. Nick (I mean Will) to freeze. I opened the shutter for about 10-12 seconds, and that was it. I had no idea what to expect on the film. That night, I developed the film, and it wasn't until I scanned in the negative the next morning that I realized that I had indeed, captured Father Christmas in a sort of timeless, ambiguous image. It's not really a posed image, because I never expected Will at that spot, but I was prepared, which was a good thing. I'm sure I can improve on this image, but I think the spontaneity and charm might be lost were I to do it with a plan in mind.

I shot the rest of the roll and none of my remaining images were as interesting as the one above. 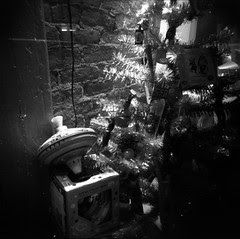 Posted by mfophotos at 5:55 PM