At one time, if you wanted to shoot with the best 35mm rangefinder cameras, there were two choices - the Barnack Leicas from Leitz, or the Contax cameras from Zeiss Ikon. (A third choice would be a Kodak Retina, which I have already discussed here on RCB.)  While both choices were the top of the line, each manufacturer approached the design for a 35mm rangefinder quite differently.  I have shot with several different Leica models, and found that the eyepiece for a Leica IIIc is barely more usable to a glasses-wearer than an Argus C3 viewfinder. The Contax, however, has a larger viewfinder with a wider baseline for the rangefinder, making rangefinder focus more accurate, and without having to look through a separate window.  The design for the Contax II was so good, that it was essentially copied by Nippon Kokagu as the basis for the Nikon S series rangefinder cameras. 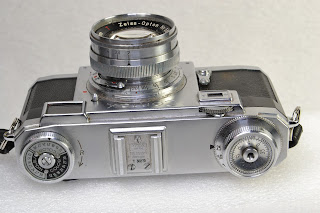 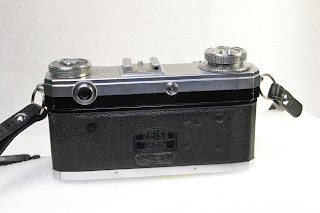 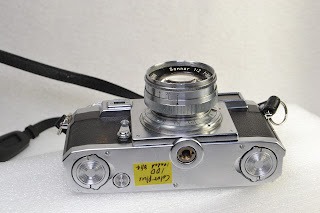 The Contax has a unique shutter design - and the Kiev copies made in Ukraine from 1947-87 share the same type of shutter, which is vertically traveling.  Comprised of thin aluminum slats bound with nylon ribbon, the shutter looks like a set of closed venetian blinds. The Nikon S series use a horizontal-traveling rubberized silk shutter, with the later SP using a Titanium foil horizontal shutter, just like the Nikon F.  So, while a Nikon S series may have a similar appearance to the Contax IIa, only the rangefinder, removable back, and lens mount are really the same.  The Kiev copies of the Contax are remarkably similar, but not manufactured with the same quality as the Contax models.  The best writeup on the Contax IIa is on the Casual Photophile site, and I concur with that author on the quality of the IIa and how it's really one of the best classic 35mm rangefinder cameras ever made.

These cameras are getting on in years, and if you acquire a real Contax model, it may be worth getting it serviced to make sure you get the best from these cameras. While a Contax IIa certainly is a great camera to use, the prices tend to be much lower than a Leica from the same time period.  Nikon S series rangefinder cameras improved on the Zeiss Ikon design, and give the same experience as the Contax IIa. However, prices for a Nikon S, S2, SP, and S3 are really high these days, but certainly worth looking into.  That leaves the Kiev copies in the very affordable range, and the only Kiev Contax copy I ever owned was a Kiev 4a, and the brass used for the film advance spindle broke shortly after I acquired it.  I decided that was enough of an experience with the Soviet copies.

I once tried out a Nikon S that I was selling for an estate, and the user experience was even better than the Contax IIa.  Zeiss Ikon made the decision to drop their Contax rangefinder line and instead concentrate on making SLRs, and I have to say that was a big mistake. Nippon Kokagu improved their versions of the Nikon S series, and the Nikon SP became a professional's choice.  Those cameras paved the way for the Nikon F SLR, which is based on a Nikon SP with a prism and mirror box, all other characteristics being the same.  Meanwhile, the Zeiss Ikon Contaflex, a lens-shutter SLR, was no match for the better engineered Nikon F with a proven focal-plane shutter and excellent array of lenses.  In a nutshell, one could argue that the Contax IIa was the zenith of Zeiss Ikon. Used by photo-journalists, the Contax gave up ground to its successor, the Nikon SP, and once they had those in their hands, it was an easy transition to the Nikon F, sealing the fate of Zeiss Ikon as a lumbering producer of cameras that while broad, was very shallow, with only a few really successful models.  The nimble and innovative camera industry of Japan gave us the Spotmatics, Nikon Fs, Topcons, Minolta SRs, Canon Ps, and others, which pretty much buried most of the European and American competitors in the consumer marketplace.  Leica, Hasselblad and Rollei stand out because they catered to professionals and are quality tools.  However, the various German companies that were NOT Leitz, or Rollei eventually succumbed to market forces, and by the 1970s, had largely died out. The Contax name was purchased by Yashica (and eventually Kyocera), and while the name went on, Zeiss Ikon was no longer a camera manufacturer.

Today, you can buy a Contax IIa or IIIa for a modest price, and certainly pay far less than one might purchase a Leica M2, which I would consider to be the approximate equal to a Contax IIa.  Neither camera has a meter, and both are fully mechanical. While the Contax has a better film-loading system, the Leica M2 has different frame lines for 35, 50, and 90mm lenses.  I would recommend that if you are in the market for a classic Contax, purchase a post-WWII Contax IIa with the 50mm f/2 Zeiss-Opton Sonnar lens. With one of the new external light meters in the accessory shoe, you'll have a camera that is a pleasure to use with extremely good optics.

In using a Contax IIa, you'll note that there is no advance lever, but a knob wind.  Film speeds are all adjusted beneath the film wind knob, and they range from T & B to 1-1/1250 sec. That was the fastest shutter speed for any 35mm camera for quite some time. Adjusting the focus with the front focus wheel via your index finger makes it quite easy to focus and make an exposure with the shutter release in the center of the film advance knob.  It's obvious that Charles Vershoor of the International Research Corp. saw the Contax I in the early 1930s, and the resulting Argus C3 has a similar control, it's nowhere as refined or smooth as the Contax! In fact the squared-off appearance of the Contax I must have inspired the brick-like Argus C.

There is a lot of information about the Contax rangefinder cameras available online, but the best overview of these cameras is found in the book "Collecting and Using Classic Cameras" by Ivor Matanle.(1986, Thames & Hudson, 224 pp., ISBN #0-500-27656-0).  Matanle's book is profusely illustrated with more than 300 photos, and his insights on the various cameras are really helpful.  It's certainly a book that anyone collecting/using classic cameras should own.  While there are many versions of the pre-war Contax rangefinders, starting with the Contax I, The post-war Contax IIa is going to be the one that is likely to work as it should.  The Contax IIIa differs in having an uncoupled Selenium light meter, which is most likely not going to work, and modern light meters are so much better.

It's one thing to own a Contax rangefinder, and acquiring accessories for it is another exercise and rabbit hole.  The filter thread diameter of the 50mm f/2 Sonnar is 40.5mm, and I have a Zeiss red filter that was made for my camera.  If you decide that you would like to use other focal lengths, you would also need to find the viewfinders that match the focal lengths. However, sometimes the fun is in the hunt! Of course, of you wanted to use other filters, you could look for a 40.5mm to 46mm thread adapter.

I found the Contax IIa a pleasure to use - easy to focus and while a lever film advance would be nice - it's not a big deal.  For that bit of improvement, a Nikon SP is what you would be looking for, at a lot more $$! 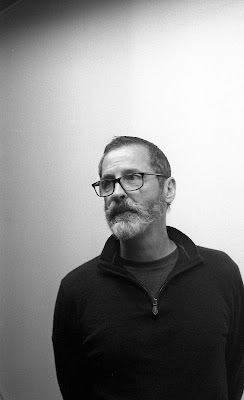 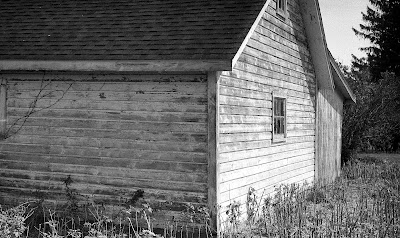 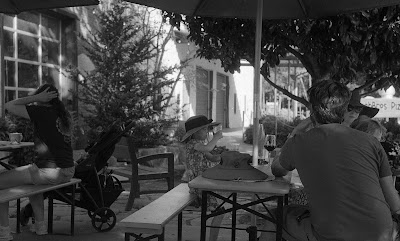 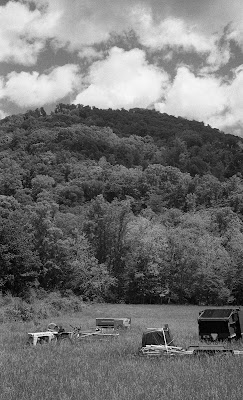 Right now, I have a roll of Kodak Color Plus 100 in the Contax, and am looking forward to the results.

Posted by mfophotos at 6:21 PM