Some Fun with the Topcon Uni SLR 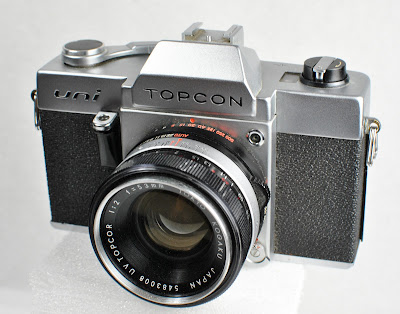 A little over a month ago, a Topcon Uni landed in my hands,  and I thought that I should at least give it a try.  About a decade ago, I owned one that had some exposure problems, and mentioned it in my previous RCB post about leaf-shutter SLRs.  Generally, I am not a fan of leaf-shutter SLRs because just about every single one that I have tried has not aged well, due to the shutters not holding up over the last 50+ years.  Don't even get me started about the Zeiss Ikon Contaflex series of leaf-shutter SLRs.  So many bad vibes with those!  Topcon, the brand from Tokyo Kokagu, was generally considered to be a very good SLR, and despite the likes of Asahi Kokagu and Nippon Kokagu, the Topcon RE Super was the first TTL SLR in 1963, beating both Nikon and Pentax to that achievement.  The Topcon line of SLRS had excellent lenses, and to this day, a Topcon Super D is still a nice camera to use, and finding one cheaply on eBay is pretty difficult.  However, one knock against Topcon was the use of an Exakta lens mount that due to its small throat diameter, prevented faster lenses such as those made by Pentax, Nikon, Canon, and Minolta.  As the company reached the mid-70s, it could not compete with the other major camera companies, and stopped sales of 35mm cameras in 1980.  Cameras such as the Topcon Uni, Unirex and Unirex EE did not use the Exakta lens mount, but what has been termed the Topcon UV lens Mount.  These lenses for this mount do not contain an aperture control, which is instead dialed in on the body of the camera.  The cameras are lens-shutter cameras, with a Seikosha shutter behind the lens. 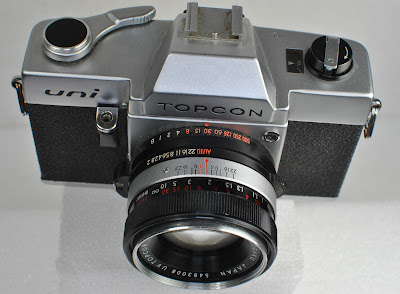 While the Topcon Uni is certainly not a top-of-the-line SLR, it was certainly good enough to suit the intended audience of the casual photographer back in the mid-late 1960s looking for an SLR with some automation (shutter priority) and ease of use.

I took the Topcon Uni on a short drive and photographed with it in Burnsville, NC. It's the seat for Yancey Co., and at 2825 ft, is located in a valley surrounded by the Black Mountains to the E and the Blue Ridge to the S and W. The highest peak East of the Rockies is Mt. Mitchell, just a few miles away from Burnsville.  It's a nice town with cafes, restaurants, some wilderness outfitters, and a local brewery.  There is a closed theater, the Yancey, which deserves to be open once again, but I don't know if it will ever reopen.  The town is named for Otway Burns, a naval hero in the war of 1812, and a statue honoring him is at the town square.  The oldest building in town, the Nu-Wray Inn dates to the 1830s, The Inn is being refurbished and should open in the near future.  There are a number of shops in the center of town that are worth a visit if you are there.

I loaded a roll of Eastman 5231 (a cinema version of Plus-X), which has become one of my favorite films.  Although I placed a PX-625A cell in the camera, I didn't trust the metering, and mostly shot in manual mode, using my intuition (informed sunny-16).  The 53mm f/2 UV Topcor lens prformed well, and overall, I was pretty happy with the photos that I took.  Development was in D-96 for 7 minutes.  Using the camera is pretty simple, and after I shot the roll of film, I realized that if I'd set the ASA to 1 stop lower than the actual film speed, the additional voltage in the P-625A would then give me a fairly accurate reading for the actual film speed.  I should have realized this upfront.

There's a lot of information on Topcon cameras, and the Camera-wiki is a fantastic resource if you need to find more information in one place.  There's a wonderful post about Topcon on 678 Vintage Cameras. Getting a manual from the Butkus site is recommended, and so is making a donation for the manual.  It's a lot of work to maintain the site and scan the manuals.  And they are free.

Some results from my day in and around Burnsville, NC. 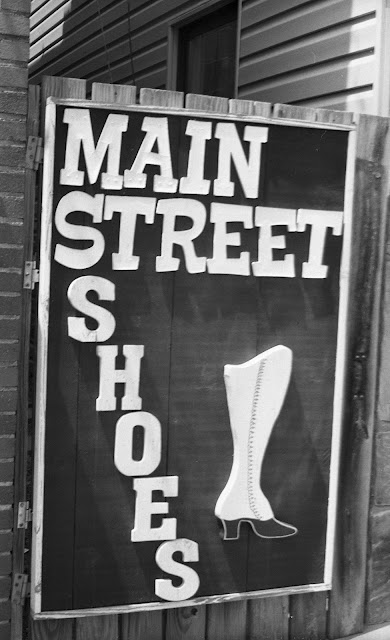