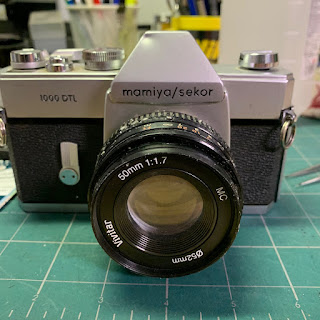 I was recently processing a bunch of cameras for the FPP donation program, and brought back some problematic cameras to see if I could figure out what was wrong with them.  I often run across these Mamiya/Sekor DTL 1000 and DL500 SLRs in donations, and at one time, they were fairly reliable M-42 screw mount SLRs with spot and average metering.  Unless you have a manual,  you may never figure out how to turn on/off the meter (pull the film advance out towards you and to turn it off, press the top of the base of the advance lever and that retracts the lever back to the body).  Anyhow, about half of the time these cameras have non-working meters, although they work fine without a battery for fully manual shutter speed/aperture functions, and you can use sunny-16 or a separate meter. 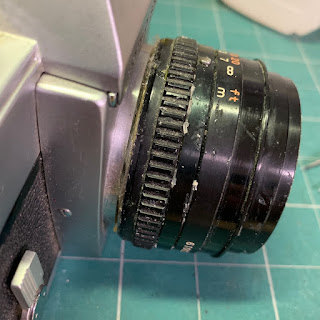 This particular camera is pretty much dead, with a seized shutter. However, as soon as I pulled it out of the box, I figured something was odd about it, as the Vivitar lens is a much later model that is commonly seen on k-mount cameras like the Vivitar V3200.  As I looked closer, I could see that the lens was epoxied to the lens mount.  Whoa.  I pried the lens off with a small screwdriver, and it lifted asway fairly easily. Yes, some previous owner had gone through the trouble of filing off the K-mount back end and then epoxied it to the M-42 mount face. 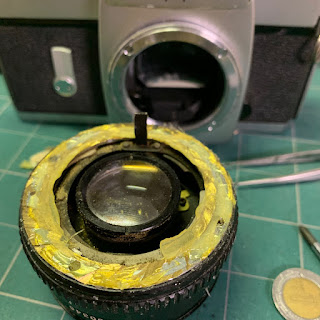 The crazy thing is, M-42 lenses are cheap and plentiful, and I am not sure why anyone would go through all this trouble t put a cheap lens like the Vivitar on an old M-42 body.  Maybe it was a very specific hack to give that result, but I really suspect it was a mess to begin with.  Needless to say, this one is a parts camera.

I previously reviewed a DTL 1000 in 2012 - and you can read it here. These cameras are under-appreciated today, but they were quite good in their day.  As someone that appreciates the M-42 SLRs, I find the Mamiya/Sekor DTL 1000 to be not as well-built as a Pentax Spotmatic, and more similar to a Minolta SR camera in features and ergonomics, as well as build.

Mamiya went through a series of 35mm SLR designs, but were never able to duplicate their success in 35mm as they did in medium format.

Posted by mfophotos at 6:00 PM