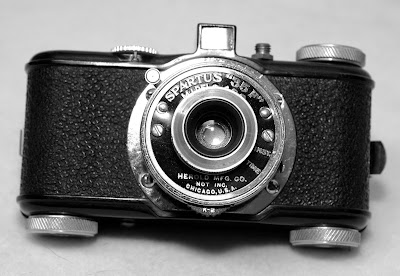 The Spartus 35 and 35F  cameras were sold from 1947-1954, and were manufactured by Spartus and then the Herold Manufacturing Co. in Chicago.  Although they are basic 35mm cameras, there are several iterations under the name, some with more than 1 shutter speed. All have several apertures.  While they somewhat resemble an Argus A, they are nowhere near the precision of that camera.  Lenses are inconsistent in results, and the cheap construction, rough finish, and lack of accurate control make them definite candidates for the Low-Fi camera selection.  Produced in the post-war photography boom, the Spartus 35 sold for about $12.00 - $29.00 depending on the model and the year.  The latter version of the 35 has a more streamlined styling, but no real change in features.

While researching the Spartus cameras, I believe I found an error in Glass, Brass, & Chrome by Lahue and Bailey (2002 reprint by Univ. of Oklahoma Press, 347 pp.).  The authors claimed that the Falcon cameras – cheaply built 127 snapshot cameras that resemble a 35mm camera, had one model that was 35mm.  I have looked in every catalog and on-line source, and there is no evidence of a 35mm Falcon.  However, the interesting thing is that the Falcon models were originally made by the Utility Mfg. Co. in New York, until 1941, when the Spartus Corp. bought the company and moved its operations to Chicago.  This is where things get a little fuzzy, as Spartus then became the company name, producing a dizzying array of cheap 127, 120 and 620 cameras under various names, as well as clocks and razors.  In 1951, Harold Rubin bought the company, and renamed it Herold Mfg. Co., still at the same address on Lake Street in Chicago. So, in the end, it is certainly possible that some part of the Falcon 127 body molds may have been modified to make the Spartus 35, but there was no Falcon 35mm.  Also noteworthy – on the face of my Spartus 35 it reads NOT INC. under HEROLD MFG. CO., meaning that it wasn’t incorporated.  The Spartus 35 was the only 35mm camera produced by the Spartus and Herold companies. 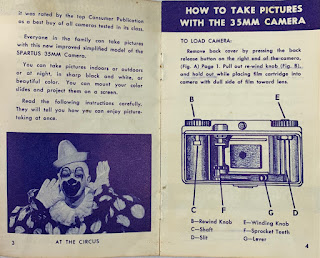 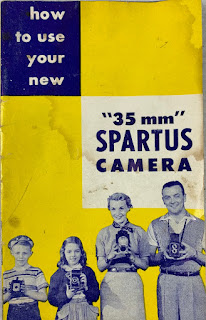 I picked up a Spartus 35F on eBay just a little over a week ago, and paid $15 plus shipping.  I was amazed that the leather case with it looked practically new.  That’s a lot of years  - close to 70, without much use. I had to add a bit of oil to gt the shutter to function as it should, and as there are only two shutter settings – Time and Instant, not much to worry about.  There are four aperture settings – f/6.3, 8, 11, and 16.  The body is Bakelite, with aluminum and brass parts. The back opens by releasing a spring catch on the left side. The film loads on the right side, with the takeup spool on the left.  An aluminum button on the back is pushed in every time you wish to advance the film, which releases a cam that does one rotation as the film advances. You must manually reset the frame counter to 0 before loading the film.

There are a few differences, other than the styling between the black plastic Spartus 35 and the last iteration – Spartus “35” with a gray plastic top deck and brown body.  The last version has the film cassette on the left side, and the takeup spool on the right.  The flash contacts are moved to the right side, and the frame counter to the left.  A push button on the right side opens the back, which is fully removable, and the button to allow the film to advance is on the lower right side of the back.  The tripod socket has moved to the center, rather than the left as part of the takeup spool assembly. Also, instead of using actual f/stop numbers on the front rotating selector, it has dull, cloudy, hazy, and bright.

Overall, a fairly simple camera to operate. While the lens rotates to focus from 4 feet to infinity, it’s pretty much guesswork. Since I was shooting mostly at f/11, with a roll of Ilford Pan-F, most subjects were over 50 feet away.  Closer shots ranged from 10 feet to 40 feet, so really, at f/11 or f/16, I don’t think the focus is as critical.  The viewfinder is just an approximation of what will be in the frame.

I took the Spartus “35 F” on a walk through the River Arts District in Asheville, which is my usual place to shoot and test new cameras.  It was a hazy sunny day, so f/11 it was, and I shot the roll of Pan-F pretty quickly as I walked through the area.   I developed the film in Rodinal 1:25 for 6 minutes, and when the film was hung to dry, I was amazed at the quality of the images.  My work on the shutter had paid off, as every frame was exposed pretty well.  I purposefully did one multi-exposure frame as 3 shots at f/16, and not too bad.  The frame spacing is pretty tight, and the actual frame size is 24x37.5 mm.  There was a small crescent shadow in the lower right corner of the frame (actually upper left in the camera), which turned out to be from a wire connecting the flash contacts to the shutter.  I pushed it upward away from the film gate, so future shots should be fine.

Here are a few images from the 36 exposure roll of Pan-F. 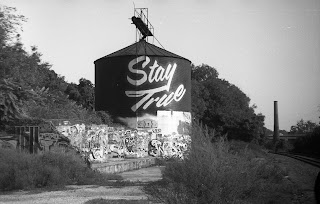 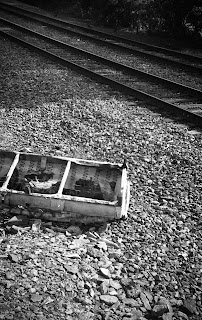 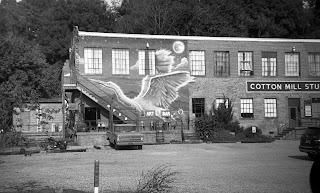 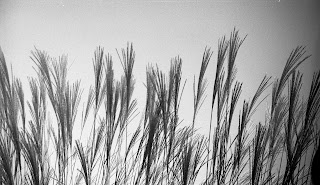 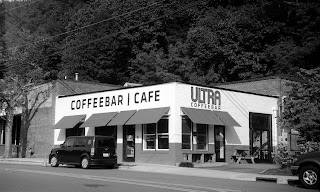 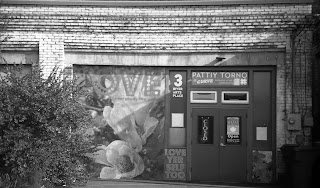 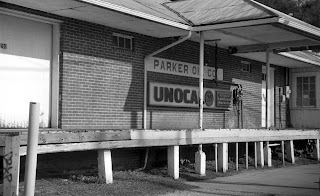 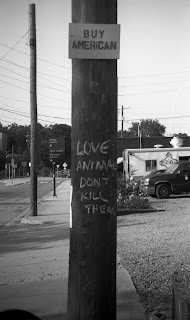 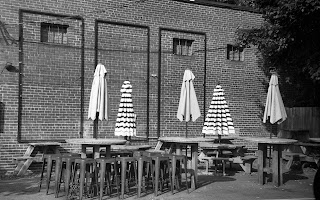 I am pretty impressed with the quality of the photos, and a low-speed ISO film such as Ilford Pan-F is perfect for this camera.

If you want to read more about the Utility/Spartus/Herold history, here are some links to follow:

Posted by mfophotos at 1:18 PM