It's always gratifying to have an image accepted for a publication.  These days, there are so many people submitting work to magazines and judged exhibits that it must be overwhelming for those people that have to review the work.  I suppose that's the rationale for so many zines out there - self-publish to get your work in the hands of others.  Online galleries are nice, but having an image in print is the real thing in your hands.  While I view Monochrome Mania as my personal outlet for my work, you'll never see it on a newsstand.  So, getting an image in a magazine with a larger audience is pretty exciting.  It's not my first published image, for sure, but nevertheless, it's very gratifying. 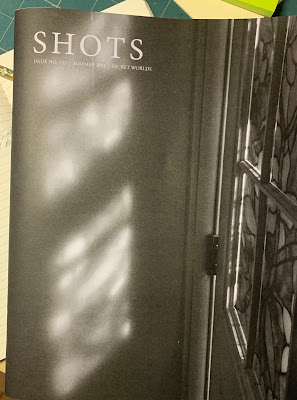 After I returned from my trip to NY and NJ, I was going through may mail, and opened up the envelope from SHOTS Magazine - a quarterly journal of black and white photography.  The theme for the summer issue (#152) is Secret Worlds, and of the 6 images I entered, one was selected, which appears on page 43 - shown below.  The title is "Secreted Away", and the subject is an old wood card file with one drawer open. The story behind the subject isn't given, but I will explain it here

The photo was taken in 2014 in the Bird Division in the old Museum of Zoology that was housed in the Ruthven Museums Building (University of Michigan), as we were preparing for a major move. One of the things about that building was the pervasive sense of history one would get after working there for a while. That wood card file contained thousands of 3x5 cards with observation data of various bird species from over a century ago.  I suppose some of that has been digitized by now, because the data is valuable. However, secreted away in those old file drawers meant that one would have to know that the cards were there.  I worked as a collection manager at the Museum of Zoology from 1981 - 2016, and wish that I had photographed it when I first started working there.
In 2016, the University started moving all of the collections, artifacts, files, books, and people from the main campus natural history museums to an off-campus state-of-the-art facility in a renovated warehouse on Varsity Drive.  I retired from the University at the end of 2017, having overseen the move of our insect collections and related materials.  The new facility is a sterile building that does not have the character or comforting feel of the old Ruthven Museums.  I no longer live in Ann Arbor, and my museum days are past, but sometime, I will have to compile some images of the "old museum" into a publication just so no one forgets what a great, if dated, place that it was.
By the way, SHOTS Magazine is an awesome photography journal.

Posted by mfophotos at 9:47 PM