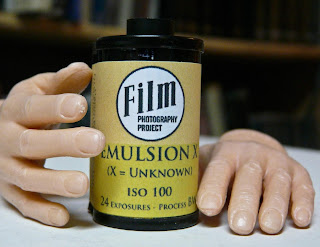 I had originally meant to put this review up many months ago, but it was delayed by many things.  The reasons will become clear as I progress through the post.  The Film Photography Project's "Emulsion-X" is just as the name describes, an unknown film stock.  Sold as a B&W film rated at ISO 100, it was offered for those of us wanting a challenge.    Back in April, I shot one roll with my Yashica FX-7 Super while on a walk in Ann Arbor's Argo park.   I developed the film in XTOL for 8 minutes at 20°C.  When I looked at the wet film, I wasn't sure if it had even developed, as one side was sort of a gray-green and seemed opaque.  After it had hung and dried, I looked again, and holding it up to the light, I could see faint purplish images, even though it certainly looked opaque unless held up to the light.  What the hell is this film?  It was also very much curled (cupped) from side to side.  There was no way that I was going to be able to scan it, so I cut the negatives into strips and put them into a plastic preserver sheet, and set that aside under some books to flatten them out.


Well, I forgot all about that sheet of negatives, and just the other day I found them. Now, they seemed flat enough, so I loaded them into the V700 scanner and scanned away.  There was just a tiny bit of cupping, but the film flattened enough for some decent scans, which I did as b&w, at 2400 dpi.  If you looked at the negative strips, they did not look any different than back in April, but sure enough, the negatives scanned fine as b&w.  The film base seems thicker than most films, and sure is not at all like the thin polyester film bases that we see from Svema.  I really am curious.  Is it a color film gone bad?  Maybe I should try a roll in C-41 chemistry, just for the heck of it.

Anyhow, the film still is mysterious.  The scans came out far better than I had hoped, and while the film is odd (okay, it's just plain weird), I managed to get something from it.  That is the fun is trying something out of the ordinary.   Yes, it is grainy, but there has to be someone out there thinking "this film is for me!"  I would not use it for anything important, but for an interesting "look," it has its appeal.  At ISO 100, you won't need a tripod  for typical daylight shooting.  Here are some selections from that roll of film. 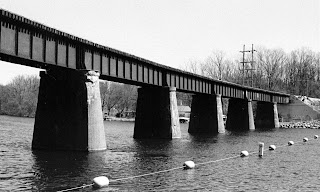 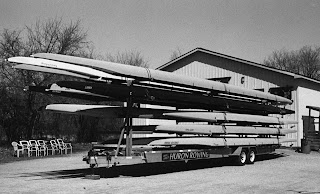 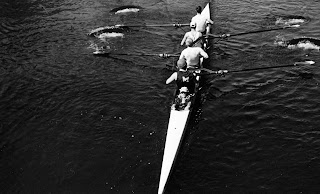 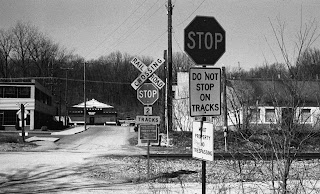 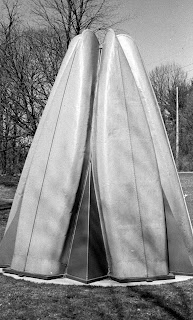 Overall, not too shabby for an unknown film with a mystery past!