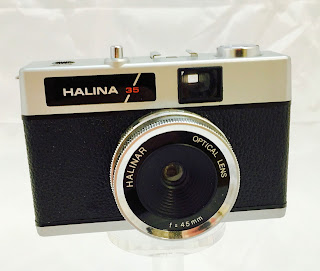 Over the past 18 years, I have used my share of "toy cameras."   Usually, I expect the results to be typical for cameras deserving of that classification.   A few months ago, I was given a Halina 35 camera.  If you do any searches, you'll see all sorts of Halina-branded cameras, most of which were manufactured in Hong Kong by Haking Co.  I have previously owned a Halina TLR, which was similar to one of the Ricohflex models. It was charming, but not exactly in the league with a Ricohflex.  The Halina 35 appeared in the early 1980s as a premium camera, often under other names, and with slight cosmetic changes.  Don't confuse this with the metal-bodied Halina 35mm cameras.  The model that I have is typical of a simple "optical lens" premium camera with few controls.  It looks better than it ought to, and I figured that I would test it with a roll of Kodak Vision 100T film from the Film Photography Podcast.   The shutter speed is about 1/100th sec, and with aperture control for sunny to cloudy and flash, I figured that would work out okay.  I shot the roll back in late summer-early fall, and it wasn't until last week that I finally processed the film at home with a home-brew ECN-2 kit that I got from August Kelm.

The Halina 35 is a simple camera, and I certainly expected my images to look like something from a Time  camera -- soft, and lacking in contrast.  However, after looking at the scans from the negatives, I am fairly impressed with the results.  I did have a few frames with double exposures, and I am not sure if it was my fault or the camera.  I'll try a roll of b&w and see if the problem is with the camera.

Here are some of the best images from the camera that I shot on the Kodak Vision 100T film.

Not too bad for a "crappy camera."

Posted by mfophotos at 4:24 PM