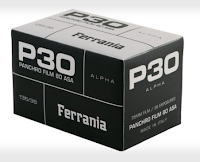 With the recent, head-spinning announcement by Kodak to produce Ektachrome this year, I was not prepared for the release of a new (actually, old) monochrome film from Film Ferrania.  The sample images I have seen that were shot with it are really luscious, with a pleasing richness that you'll never get from a digital.  The 80 ISO is a nice speed, as not all of us want 400 ISO films for everything.


Then, Bergger anounced that they will be releasing a 400 ISO b&w film, Pancro 400, which will be available in 35mm, 120, and 4x5! I am less familiar with Bergger, but I did know of their paper.  I wondered if the Bergger film the same as  the JCH Street Pan, which has had very good reviews, but the JCH film was made by Agfa.  I confess that I have not yet purchased any myself.

So, with these announcements, is 2017 the year when film strikes back?  It is no secret that more people have come BACK to using film, for a multitude of reasons, but I believe the most obvious reason is that film is a creative medium.  In terms of market, digital has a large hold over traditional film. However, film remains strong among those that appreciate the art of photography, the sheer joy of the process, and being in control of your image.  Not to mention, that in a world where just about everyone takes photos, film remains a tangible, physical reality that transcends time and digital resources.  I got thinking about this when I scanned in some slides from the late 1970s that I had taken with my Exa 1a SLR.  Mind you, I was using slide film, sunny-16, and never had a meter of any sort. Yet, I have some pretty decent shots from then. I didn't need any software to view them in their plastic sleeves within the binder to appreciate them.  Scanning went well, and also allowed me to do a bit of color correction. Yet, the originals are safely tucked away.

I am not here to bash the digital realm -- it is a necessity of every-day communication, consumption, and path of ideas.  Without the internet and the invention of the magic of HTTP and its subsequent eruption of the web as we now know it, we would be back to using something like CompUServe (for those of you who do not know of a world without internet -- we got along just fine.)  We are a visual culture, and photography is an extension of that.  We can still use film and share online, share via printed works, share via exhibitions, and yes, share via Instagram if we so choose.

I think it would also behoove the primary SLR manufacturers to rethink their marketing strategy.  While sales of DSLRs have dropped due to the smaller size and capabilities of the mirrorless cameras, smartphones have decimated point and shoot sales.  If Nikon, Canon, and Pentax were to release at least a decent 35mm SLR again, it would be a great thing.  All Nikon has to do is manufacture the F100 again-- certainly the best AF SLR that wasn't an F5 or F6.  Canon could produce an EOS film camera (not the plastic Rebels, please), and Pentax ought to have a K1000 made once again.  Do you know how many people think the K1000 is the best student camera ever?  It amazes me.  Yes, there are a lot of used film cameras available, but having a new model would certainly not be a bad thing.

So, maybe it's time to have people petition the camera makers for new film cameras.  I don't know what more digital can offer anyone that it doesn't already.  Meanwhile, we have some new films to try out!

Edit: After writing this post, I found this post by Zorki Photo, which is a very good article.

What a great point about the big boys resurrecting some of their former gear for us filmheads. There's got to be a market.

Indeed, 2017 is starting out to be an interesting year for film. I do have to disagree about the Lomo analogy, though. The market for Lomography cameras is going to be different than for a return to 35mm SLR's, and particularly ones that fit lenses that we already own. Given that I already have a stake in the EOS system, I'm not sure that I would pay $1200 for an EOS 35mm film camera. That said, it might very well be the price point for Canon to be able to make such a move. That's twice the price of a new digital Rebel (body only).

Still, we have to be excited about the prospects of new-ish film stocks hitting the market this year.

Well, I would hope that if a major brand releases an SLR body that it DOES NOT cost $1200! I have no idea what is costs to produce a body, but it sure has to be less without the imaging electronics that are in a DSLR!
:)

Indeed, wouldn't it be nice to see a new film SLR from one of the major camera manufacturer. I doubt if we'll see it soon; there are still a lot of good used bodies available cheaply but they won't last forever, especially as demand seems to be picking up.

But the revival in film is heartening. I'm an original Kickstarter backer of FILM Ferrania and looking forward to my first rolls of P30. I've also used the Bergger BRF 400 film, which is a good film somewhat akin to Ilford HP5 Plus, so I'm looking forward to the new film too. I never really imagined film would take off again, but, then again, I never thought vinyl records would revive as they have.