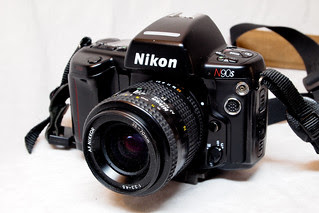 Back in the 1980s and 90s, Nikon was producing a slew of auto-focus 35mm SLRs, and each iteration had better features, with Nikon gradually introducing their AF SLRs in different tiers, catering to casual shooters, serious amateurs, and pro-level users.  In 1992, Nikon released the N90, their top-of-the-line camera for serious amateurs and professionals.  The F4 was introduced in 1988, and was Nikon's first F-series camera with built-in autofocus and autowind.  The N90 replaced the N8008s as the top non-F series camera in the Nikon lineup,  In 1994, Nikon added some improved features to the N90, including 1/3 stop compensation and a faster AF module, and called it the N90s.  Rounding out the field was the N50 for "beginners" and the N70 for the amateurs.  My first AF SLR was a Nikon N50 that Bill Brudon had given me, and I thought it was an amazing camera.  It was, coming from a Pentax MG that I had been using for 16 years.  The N50 however, had firmly established Nikon's habit of "crippling" the lower-tier cameras by not allowing them to meter without an AF lens, no depth of field preview, no remote release, etc.  Program modes were easy to use, and the camera also had the typical PASM modes that we expect.    The N70 was the next step up, which really was a replacement for the N8008s.  It had a quirky LCD on the top deck and selection mode that really made the camera a real button-pushing wonder.  I have heard that it was considered a "dog" by many users, who preferred the straightforward use of the N8008.  So, with that bit of history out of the way, here is what prompted me to write this story.
I was in my favorite store last week --the dreaded Black Friday -- however, it was Huron camera in Dexter, MI.  A much better place to be than those other stores that were in the news.  I was rummaging around in the bargain bins at the back of the store and saw a couple of AF Nikons SLRs.  There were two N90s bodies, and one was marked $10 (and was very beat-up) and the other was marked $20 and looked to be in pretty nice condition.  Now, I need another AF film body like a hole in the head, but the N90s is a camera with all the features that one can ask for (except for a built-in flash, which designated it as a pro-level camera!).  I borrowed a set of 4 AA batteries at the counter and tested the camera out.  Aside from some elements of the numbers in the viewfinder LCD being faint, the camera seemed to work fine.  So, I bought it and shot a roll of Kodak Gold 100 and dropped it off at Huron the following day to get developed.  I picked up the negatives today, and am quite pleased with the results.


The camera works very well, and I know I got a heck of a bargain.  Even though the N90s does not have 5000 focus points and 10 fps shooting, etc., it has held its own.  It's certainly an excellent camera for anyone that wants a reliable AF film SLR, and because the N90s also can meter with AIS manual and AF lenses, it's far more versatile than say, the much later and crippled N80.   The 10-pin connector on the front allows the use of a remote cord and shooting data was at one time recorded and saved to a Casio PDA.    The PC flash connector is very handy, and the camera also features an eyepiece shutter, a high eyepoint VF, programmable modes, and lots of other features that are appreciated once you need to use them.  These features and the reliability of the camera make it a Modern Classic!  If you get one, remember that G lenses have no external aperture control, so you must use them in P mode on this camera.

Thanks for the enlightenment on this more modern classic. I've got an N60 and an N65 here. I've shot the N65; it's okay. But if I ever bump into an N90s now I'll know what I'm getting!

Nice post. I've got one of those, but it's been modified just a little. ;)

The N90S was the camera that Kodak used to create one of the first DSLRs, the Kodak DCS 420c. At a whopping 1.5 megapixels, it was state of the art for 1994.