The Yashica J-P -- a middle-aged SLR

Back in mid-September I purchased a bit ratty-looking Yashica J-P SLR when I was in Kenton, OH. I paid ten dollars, which I felt was a fair price, given it's condition. After I got it home, I cleaned it up, and ran it through some dry-firing. It seemed to work okay, although sometimes the mirror wanted to hang a bit after the shutter fired. Unlike the later Yashica SLRs, the early models such as the J-P had the "standard" M-42 screw thread lens mount. That mount was used in a variety of cameras in the 1960s and into the 1970s. Pentax, Praktica, Ricoh, Fuji, Cosina, Mamiya, Olympus (before the OM-series), Zenit, and a number of re-badged models, such as Argus, Vivitar, Sears, etc., all had the M-42 mount. While not exactly the swiftest mount for a lens-change, it was a stable mount that had a whole truckload of lenses and accessories that were pretty much interchangeable over a broad number of cameras. A number of manufacturers then changed to more proprietary bayonet lens mounts, and Yashica went to the Contax-Yashica mount (C-Y) in 1975 with the introduction of the FX-1. 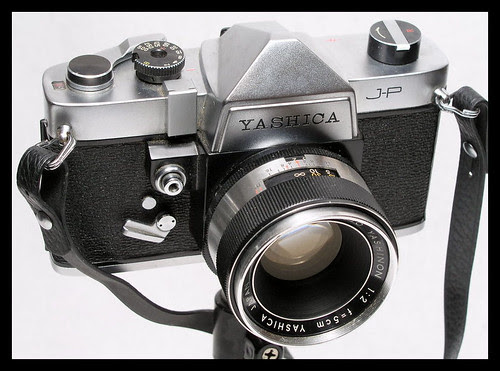 The J-P is a no-frills SLR with the maximum shutter speed at 1/500 second. It does not have TTL metering (that came out with the TL-Super in 1967), but it does have an attachment point for a clip-on external meter that couples to the shutter speed dial. The cloth horizontally-traveling shutter is pretty standard for its time. The lens is an AutoYashinon 5cm f/2. While there is no cold-shoe or hot shoe for the flash, there are two PC contacts for X-sync and FP flashbulbs. After I played with the camera a bit more, I realized that the frame indicator dial was stuck at 33, and the self-timer did not work. Oh well, I decided to run a roll of somewhat expired XP-2 film through it. It took a bit of getting used to having the shutter button on the front of the camera, but overall, the camera was fine after I got used to its few quirks. I took it to downtown Ann Arbor and also up to the UP in early October. Here are a few resulting shots: 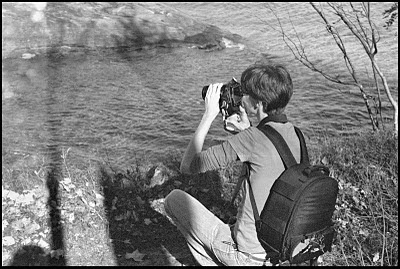 Jorie at the shore near Christmas, MI. 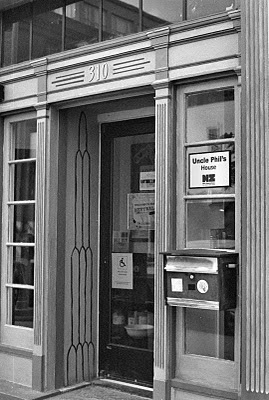 The Neutral Zone in Ann Arbor - a place for teens to hang out and be creative. 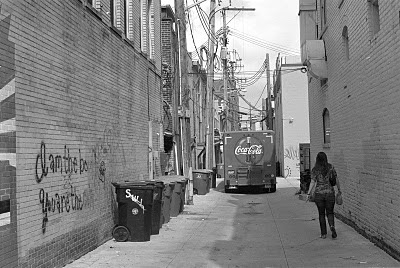 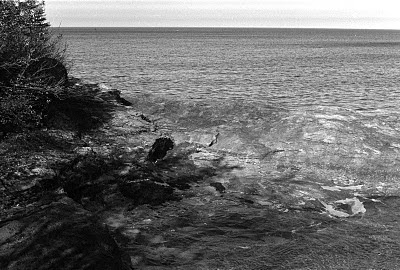 I basically used the "sunny-16" exposure guide for shooting with the camera, as I often did not have an external meter with me. Based on my experience with this Yashica, I am tempted to try a TL-Electro if I ever see one at a cheap price. The lenses in these Yashicas are excellent, and despite the seeming awkwardness of the shutter button (note that there is a reason why they are usually on the top deck of the camera), the camera worked fine for its age and condition. For those with a penchant for M-42 lenses and cameras, the Pentax Spotmatics are not the only game in town. There are a number of good to great SLRs from others that can often be had for the price of a meal at a fast-food restaurant. Scary. They were not cheap when they were introduced, and if you get one in good working order, it'll take photos just as well as anything else you can find.

Posted by mfophotos at 1:46 PM

Thanks for the review. I enjoyed it and like the pictures too. I have one of these myself and will be in the process of fixing it up soon. Kind regards...Paul.