Back in May, my daughter and her partner were in Japan for a 3-week class, and I hoped that they would bring back some film from Japan for me. I didn't think that they would bring back a camera, though in this case, it was a Fuji one-time use (OTU) camera. The strange thing is that even though most of the packaging was in Japanese, the wrapper stated that the camera was assembled in the USA! 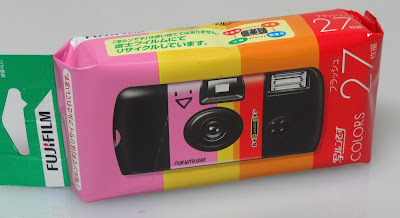 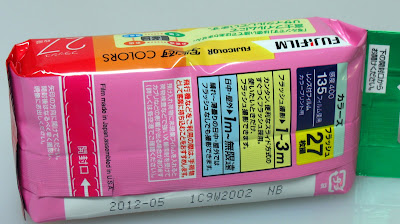 Opening up the wrapper revealed a petite camera with a little face. 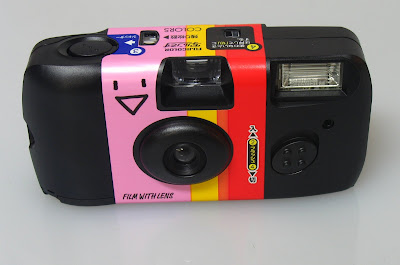 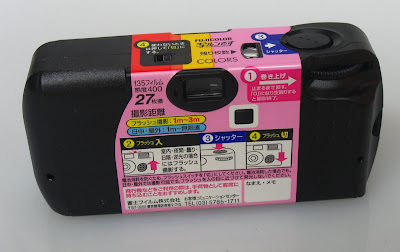 It's a point and shoot, so the instructions don't really matter. I cannot imagine a 1940s box camera with instructions printed all over it for the user, so it's obvious people have become stupider in regards to handling mechanical things.

A few months ago I posted about the Agfa LeBox camera, a simple OTU camera without a flash. This Fuji camera is much sleeker and has a flash, plus a wider-angle lens. I carried the camera with me to the Toledo Botanic garden at the end of August, and finished off the roll in and around Ann Arbor. It's so light that it can sit in a shirt pocket without even realizing it's there. So, here are some sample photos. The film was developed at Walgreen's and I scanned the negatives on my Epson 4180 Photo scanner.

One from Dick Alexander's farm...

So, overall, the photos were pretty acceptable. The technology that can make these cheap plastic lenses perform so well within the limitations of the camera is impressive. The glass lenses on cheap box cameras from the 1950s and 60s were pretty awful, in most cases. These little cameras produce pretty decent images - a 4x6 print is usually the goal here - so long as they are used under the proper range of conditions (that's probably what the instructions were for).

So ends the trip for the camera that was assembled in the USA with film made in Japan, shipped back to Japan, packaged, sold, and then returned to the US! Thanks to Jorie and Stephanie for bring it back with them.