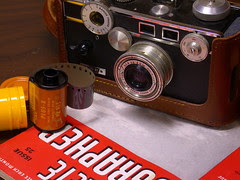 I have to agree with everything here; the "shareholder value" perspective that companies should sell off anything that's not making top profit is extremely short-sighted. People are still going to want film for a long time, and many of us are willing to pay a pretty penny for a roll of good stuff. Why sneer at all that business just because it ain't digital? Kodak moving to only digital offerings would indeed extinguish their distinguishing characteristics. :P