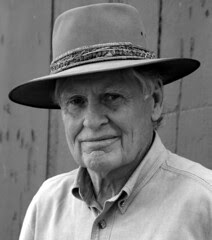 Horseman
Originally uploaded by argusmaniac.
Our friends Dick and Lorrie Alexander invited us over for a dinner and ice-cream social at the Bethel Church down the road from their farm. Dick also wanted me to take some photos so that he'd be able to include a recent one on the dustjacket of a book he's writing called "Playin' Cowboy." I probably took 50 shots, and like this one the best.
Richard D. Alexander is an amazing man. I have known him for 25 years, and am pleased to have him as a friend, mentor, and a former boss at the museum. He's not pretentious - he's a member of the National Academy of Sciences, has won their highest award, been recognized as a top faculty member at UM, and other accolades. He's one of the great minds that have tackled thorny issues in evolution and human behavior. Yet, at heart, he's still an Illinois farm boy with an amazing breadth of talent in so many things - music, art, literature, science, horsemanship, farming, telling stories, and a good human being. He retired in 2001, and since then has written at least 4 books. Some of his material can be seen at www.woodlanefarm.com.
Posted by mfophotos at 11:33 PM

Excellent photo. What sort of world would we live in today, if not for so many 'farm boys' making extraordinary contributions. This is a moving tribute. Thank you for sharing this.