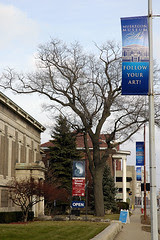 Follow Art
Originally uploaded by argusmaniac.
Yesterday, Marjorie, Andrea, and Matt accompanied me to the Edward Weston exhibit (see previous post) at the Muskegon Museum of Art. For once, we had great weather for such a trip, especially considering that it is January. The sun and relatively warm temperatures (about 35 deg. F) made it seem more like a day in March than the beginning of the year.
The MMA is a grand marble building, and admission is only 4 bucks, which is quite amazing. The Weston exhibit is a travelling show, and the gallery for it was really wonderful, with my only criticism being that some sections could have used more light. The selection of Weston images went from his early pictorialist style to his Point Lobos days. I was amazed to find that some of his early nudes were contact prints from 2.25" x 3.25" negatives. What was most enthralling to us was the transformation of Weston's ability to capture form and present everyday objects and landscapes in a way that made them viewable either as abstractions not just as nudes, landcapes, or still lifes. He must have seen the sensuality and universality of curves - whether it was a pepper, nautilus shell, dunes, or Charis' body.
To see so many of his photographs superbly matted and framed -- all in 16 x 20 mats (4 ply) in black wood frames, was just an awesome experience. They were often grouped by the period or the subject matter, and the groupings were well-planned.
The only odd thing in the show were two separate small exhibits of cameras. Now, you know I am a camera geek, and one exhibit implied the cameras that Weston would have used, such as the 5x7 portrait Graflex. Another display had several Kodak box cameras and a Disc camera! No explanation about the cameras or their significance (other than their original prices and that they came from the local historical museum), which makes me wonder about why they included them.
Overall, the Life Work show of Weston is a great exhibit that I recommend to anyone with an interest in photography. If you want to see the breadth of one of our greatest photographers, this is the show.
Posted by mfophotos at 8:40 AM

A disc camera? Certainly Weston did not use such a camera.

I am not much of a camera geek - I like using the same camera for ever (because I end up knowing the camera). Not the specs, but the limitations - and how the pics will turn out.

nah... a huge negative is 8x10"! Then you see the real magic of photography.

What is it with men and obsessions with size?