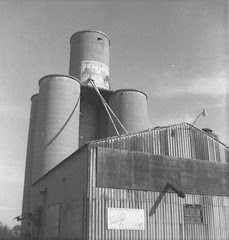 hawkeye shot
Originally uploaded by argusmaniac.
Last weekend I shot a roll of Verichrome Pan 620 in my Brownie Hawkeye. The film came from a lot that someone gave me at the Argus Meeting back in May. The expiration date was 1961, meaning that the film is at least 45 years old! It rolled on okay into the camera, and I took some shots with it in Jackson and Hillsdale, MI.

Developing was fairly straightforward, though it took several tries to get it on the reel. I developed in Diafine for 3 minutes. This is a sample frame, scanned directly from the negative. All I did was adjust the curves a bit. Frankly, I am pleasantly surprised at the fact that the film was still useable, let alone getting a decent image from it.

Here is a pic of the camera!

That's the wonder of analog photography. Try doing this with a 45 year old digicam...
Posted by mfophotos at 1:45 PM

You are too cool. I wish I could come to your house and play with you. In the darkroom I mean. :P