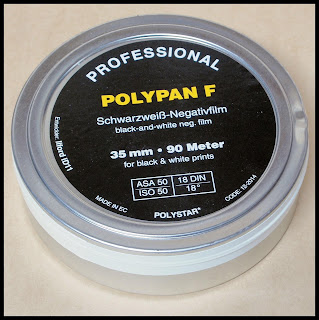 In late 2012, I purchased a bulk roll of Polypan-F from a seller on ebay.  It was shipped from Germany, and  the film can has nearly 300 ft of film in it.  At the price I paid of about $25, it is quite inexpensive.  It is apparently a cine copy film, as it has no anti-halation layer, a polyester base, and rounded sprocket holes.  There's bee a lot of chatter about this film on APUG, Flickr, and the Film Photography Project site.  It doesn't matter to me who made the film, or what it's intended use was (as if that has stymied me before).  My question is pretty simple -- what do I get when I shoot this like any other b&w film at the box speed?  Forget the instances of getting a "glow" (like some of those Lucky films) in the highlights.  Is this film any good at recording what I am shooting?  How does it work with D-76?  If a film can't deal with D-76, then it better be TechPan or another high-contrast film.

I went into my darkroom and respooled about 90 feet pf the film from the large reel in the can to a smaller reel that will fit into my bulk loader.  I had heard that the film scratches easily, so I took great care to handle it as little as possible.  Once in the bulk loader, I filled a half-dozen 35mm cassettes, printed out cassette labels, and was ready to go.    The ISO was 50, and I developed the film in D-76 1:1 for 8 min at 68 deg. F.  The results speak for themselves.
My first roll was  shot in my Nikkormat FS, using sunny-16.  The film really surprised me.  In a full-sun shot to the left, the portrait of my buddy Marc has a real 3D look about it.The tonal range runs the entire gamut, and there is a bit of glow on the metal zipper pull.

In the snow and ice photo, I can see lots of detail, which is very good.  This was under cloudy-bright conditions, so the snow brightness isn't totally taking over the scene. There is lots of detail in the darker water areas of the image.

The first roll convinced me that this was going to be a lot of fun to shoot with.  Rolls 2 and 3 were shot in Kansas with my Nikon EM.  As much a P&S SLR as can be.  I was quite happy with my results, and know that I'll continue shooting with this film until I use it up.

A couple things to remember:
1. This film has no anti-halation layer, and the polyester film is very good at "light piping."  Make sure that you load the film into your camera in subdued light.
2. If you don't want halos around bright objects, use a camera with a non-shiny pressure plate.
3. Shot at box speed it works great, though others have pushed it to 200 with good results.
4. The grain in D76 1:1 is quite good,   and I see no need to use another developer, though I will try caffenol-C sometime.
5. Supplies of it from Europe are sporadic, so if you see it, buy it. More images from the Polypan-F are on my Flickr site!

Posted by mfophotos at 6:10 PM

I shoot a lot of Polypan F, have 180M, and really love the tonal range..

I introduced the FPP to Polypan F, and in fact, have introduced it to many people around the world!

It is a brilliant film, and has some fantastic qualities to it!

Enjoy it while it lasts!