A Visit With Marcy Merrill of Junk Store Cameras
Over the years, I have made many friends in the course of  my photographic endeavors, and I count Marcy Merrill as one of my "oldest" friends.  When I started getting interested in knowing more about old cameras, her Junk Store Cameras web site came to my attention in 2001.  At the time, I was also getting interested in collecting and using Argus cameras, which she was also doing. Now, if you have seen Marcy’s web site, you would know that she lives in Tokeland, Washington.  A perfect name for a place in a state where marijuana is now legal.   However, she is originally from Michigan, so she visits family not far from Ann Arbor.   I enjoyed her quirky sense of humor and the write-ups that she did for the cameras that she featured on her site.   She was a camera corrupter of the highest order, and I found myself looking for some of the cameras that she reviewed.   We corresponded a bit, and ended up meeting for lunch in 2008.  Since then, we have met up a few times when she is out in Michigan, and the cameras are very busy.  Our last meetup was on October 4, and we had a great day of shooting in Fenton and Holly, MI.

In late May of 2018, I was visiting Portland, Oregon for a week, and was able to drive up to Tokeland, Washington to visit Marcy and her husband, Bob.   The drive there was quite scenic, and their home is a feast for the eyes.  Marcy’s eclectic, bohemian/beach bum/pacific coast cottage is a true delight.  I had planned to interview her for the Film Photography Podcast, as she is a talented professional photographer, as well as a camera collector, artist, and beach-comber.  She is also a runner, and thankfully, did not try to get me to go on on a half marathon  while I was there!


We did a walk along Washaway Beach, so named, because, it is washing away the low-lying coastline.  Because of the currents, and because of illegal dumpers, flotsam and jetsam turn up on the beach, and Marcy has documented a lot of the things that have been found on the beach. Years ago, we thought she might have found a huge chunk of ambergris (whale vomit), but it turned out to be some sort of industrial material.  On our walk, we did not find much that was exciting, though there were millions of "By the wind sailors", Valella valella, which are Hydrozoan colonies that resemble jellyfish.  Washed ashore and drying, they look like used condoms, and smell kinda fishy.  Marcy found a dead albatross with a leg band, which she photographed, and sent the info along to the US Fish and Wildlife Service.  Turns out that it had been tagged as a nestling in Hawaii in 2003!  Obviously, the beach combing is a routine, and one never knows what will turn up.


First of all, Marcy and Bob live in constant danger.  They live scant feet above sea level, and would be right in the line of any Tsunami.  Second, the ocean churns away at Washaway beach, and eventually, the beach will be at their door...in twenty years? Who knows?  They temper this dangerous situation with a house filled with whimsy, love, and cameras (and guitars), and their dog, Hawkeye.  I had the guest room upstairs, and I could hear the ocean that night.  I guess I should be worried if I did not. 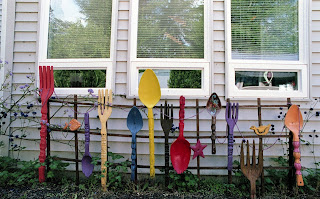 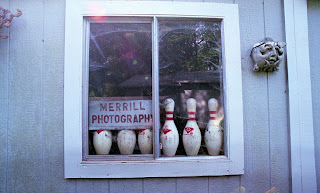 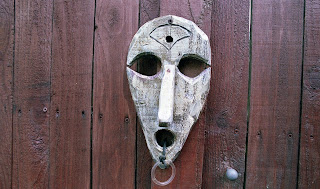 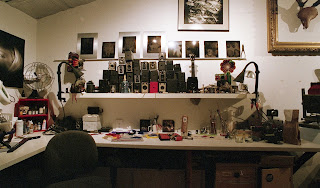 Over the years, Marcy’s studio, or parts of it, have appeared in many of her images.  We retreated to the studio for the interview, as Bob was having a jam session in the house with some fellow musicians.   Bob’s retired, as am I.  Retired people take their passions seriously.
One of Marcy’s talents, which has garnered her some notoriety, is her beading of camera bodies, turning them into fully functional art pieces.   Her transformation of basic black bakelite cameras into polychromatic wonders is amazing.  In the photo, you can see the Brownie Hawkeye on the workbench.  I can say that she is never idle, as if idleness in this beautiful part of the world is a bad thing.   Marcy has images of her creations on her website.  I think they should be in museums. Oh, she is also beading a bicycle, which ought to be something quite unique when it is completed. 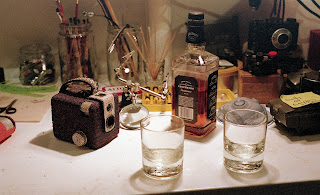 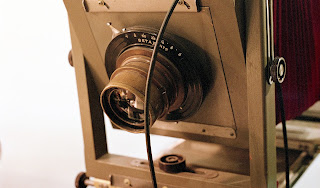 We sat in her studio and talked cameras and photography for hours, examining some cameras, and sharing our knowledge.  Of course, the bottle of Jack Daniels did get close to empty by the time we were done talking.  Marcy will shoot anything that can hold a photosensitive emulsion.  Altoid boxes turned into pinhole cameras - her Pintoids, to crappy plastic cameras that calling them cameras is being generous.  She makes them work, whether to prove that she can do it, or to use them to create unique images, that will make you appreciate her artistry.   She’s a self-employed photographer, and despite being in a seemingly remote part of the country, she makes it work.  It’s not as remote as it seems, and she travels a lot.  One of her "pet projects" is to volunteer and promote (via her photographs) the adoption of shelter dogs and cats at PAWS of Grays Harbor.   She draws a lot of inspiration from just walking along the coast with Hawkeye and seeing the ever-changing Washaway Beach.   I should also mention her series of photographs of people wearing formal wear in inappropriate situations (#formalwearworninappropriately ).  The images are full of humor, whimsy, and are really engaging. 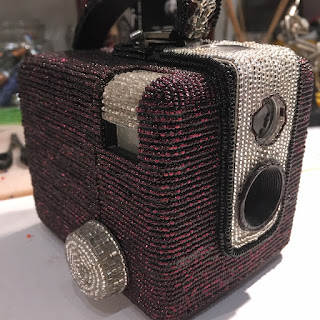 Marcy talked about her upcoming trip to England, Scotland, and Iceland, where she was planning to donate her beaded Gala Brownie Hawkeye to a deserving person, and continuing her world peace through Junk Store Cameras tour.  She was also planning to run a half-marathon in Iceland.  I just hope that she brought enough Argus cameras with her to create a new set of Argus enthusiasts.


Two quotes:
"The picture isn’t always the end result; but just the fact that I can take a piece of plastic and make it take a photo is a reward."

"I have to make the camera work, or it doesn’t stay on the shelf."

Marcy has already blogged about my visit on her site.

It was a fun 24 hours in Washington, and I hope to return there again someday.  There is so much to see in the Pacific Northwest!

Oh how cool! Junk Store Cameras was probably the first site I found in 2006 when I started collecting again and wanted to find info about the gear I was buying.

Great write up about a great photographer....one of your photos reminded me that Marcy taught me how to drink whisky....she’s A-ok!
Keep up the good work, Mark.

Thanks for the update on Marcy Merrill. Her Junk Store Cameras site was a source of inspiration for getting me back to film photography.

Marcy Merrill is an amazing gift to the world of photography. Her creativity has no boundary's with world class patience and artistic skills. She says she is from Michigan but I strongly suggest it is a place MUCH farther out than that.