Images... and more images from Colorado

(Part 1 of 3)
I'm back from a vacation in Colorado, New Mexico, and Arizona.  We spent a week in the Avon, Colorado area, and did day trips to nearby places that looked interesting. We had no planned places to visit, except for the Denver Botanical Garden after we arrived in Denver.  It was great to stay at a friend's condo for free, and not to have to stay in a motel for a week.  We were able to have breakfast and dinner "at home."  After we settled in, I went to look up nearby points of interest, and got out the maps.  The first thing I noticed after we arrived was that my body was not used to being above 5000 feet above sea level.  Chalk part of that up to age (61), and living in Michigan for the past 37 years.  I try and walk at a fast pace at least 2 miles most days of the week, and I have to wonder how much worse I would have felt had I not.  Avon is about 7400 feet, and as the week wore on, I felt more acclimated.  However, some of the days we were over 10,000 feet, and in Leadville, going up some stairs was pretty breath-taking.  The second thing I noticed was the sky.  The West has LOTS OF SKY.  Whether you are in the mountains of Colorado, or the deserts of Arizona, the sky is something. I'll talk more about that later. 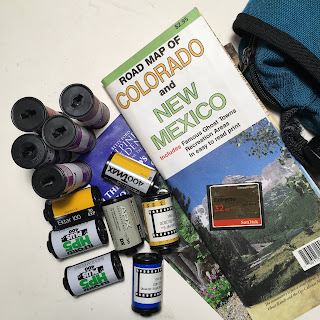 As I noted in my previous post, I brought my D300 SLR and a bag of lenses, my Leica M2, Yashica A TLR, and a Debonair plastic camera.   I shot about 1000 images on the D300 over the span of almost two weeks, and I have yet to develop the film that I shot with the film cameras.  My M2 got lots of use, and the more I shot with it, the more it became almost second-nature to use. At times, I left the D300 in the car and just brought along the Leica and the Yashica.  My plan was to bring along my Chromebook laptop and backup my digital shots to my Google Drive every night.  That worked great, and was pretty much automatic.  I enjoyed the Chromebook's instant-on, ease of use, and light weight.  The only thing I also had to bring was a CF card reader to get the files from the D300. It also allowed me to post some photos online during the trip. While my Instagram feed from my phone was also used for Instagram and Facebook, the images I take with my DSLR are going to be different, so it was nice to be able to post those for a change. In the past, I have brought along my iPad, but a real laptop offers me more flexibility. The Chromebook fills the niche quite well.

After we returned to Ann Arbor, I uploaded my images from the CF card into Lightroom, and started the still-ongoing image selection and editing process.   I'll start developing the film this week, and will scan the negatives ASAP.   I have been shooting film so much, and digital so much less, that I don't think I was prepared for the number of images to go through in Lightroom.  I'm still at it, and of course it's great to look at them and think about where I was and what we were doing when I shot the image.

The Denver Botanic Gardens was a good way to start the trip, and see a bit of Denver in the process.  It always has amused me to think that Denver is in a flat plain, yet is a mile high.  Flying there is an instant intro to the higher elevation, whereas driving west, you get the sense of change gradually.   We had rented a 2018 Ford Edge at the airport for our driving around for 2 weeks, and I appreciated the mapping and directions on the console. It was a new experience for me, and it really made a difference in getting to destinations without any hassle.

We had only a short visit at the Denver Botanic Gardens, as we needed to be in Avon before sundown. We arrived at the condo just before sunset, and it was a great scenic drive.  Avon is not far from Vail, and the area is mainly geared for skiing. I am not a skier, and of course, everything was green. There is still lots to see and do if you are not there in the winter.  Of course, that means we did some day trips, and I'll post some images from a few of them.  Colorado IS stunning.  I have visited other parts of it in the past, but all those trips were long-drive days, without the benefit of having a home base to start from.  I really enjoyed our stay in Avon.

Our first day there was spent getting groceries and checking out the Avon area.  The next day, we headed to Glenwood Springs. We drove along highway 6 until we got to Gypsum, then it was I-70. What a tremendous experience it was driving through Glenwood Canyon along the the highway! We crossed the Colorado River numerous times, and the view was just amazing.

Posted by mfophotos at 5:45 PM