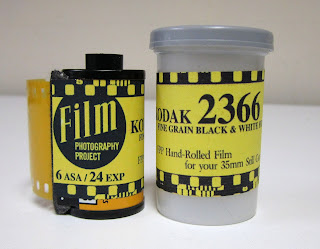 Over the years, I have shot some unusual films. Most of the odd-ball films tend to come from the cinema world, where specialty films have distinct niches that come into play in making movie titles, b&w duplication, making positives, and other facets of movie-making that we just don't think about. Of course, digital may have reduced the demand for such films, but they are still out there and available. To make matters more interesting, some of these films have low-ISO speeds, high acutance, odd-spectral sensitivity, and may require low-contrast developers to be usable for pictorial use. The Film Photography Project has done a lot to bring us some of these weird films, and I finally got around to shooting a roll of the Kodak 2366 film.  First of all, Kodak 2366 was intended to be a duplication film in the movie industry, making positives from negatives film - direct-duplicating means that the negative of the other strip of movie film is against this film and exposed to a bright (often arc) light to produce a positive print that can be used for projection.  Usage of a particular develop gives a full tonal range. Ah, that's all great, but what about regular photography?  Well here are some points:
1. ISO 6  (not all cameras go this low,  but my N8008 and F100 do.  Otherwise, the typical lowest ISO is 12, so set your ISO at 12 and add 1 full stop of exposure compensation.)
2. With such a low ISO, you should use a tripod to eliminate shake.
3. This is a blue-sensitive film.  Designed to produce b&w positives from b&w negatives, it will have full tonality. However, shooting a real scene will render reds much darker.
4. The spec sheet calls for  D-96 developer, which is used in machine processing of movie film. I won't go into it's differences from Kodak D-76, but using D-76 will produce good results with this film.
5. Developing in D-76 - dilute 1:1, and develop for 8-1/2 minutes. A water stop bath will be fine.  Fix in your typical fixer for 8 min.  Wash how you would any b&w film.

I put a roll in my Nikon N8008s, and shot it on a sunny afternoon in downtown Ann Arbor.  I shot hand-held, because I had left my tripod in the car.  However, it freed me up to do some shots with it that I normally would not do.  I developed as indicated above, and was rewarded with some interesting results: 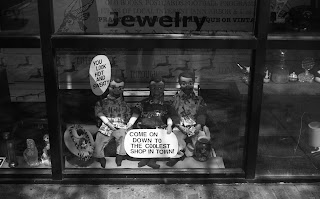 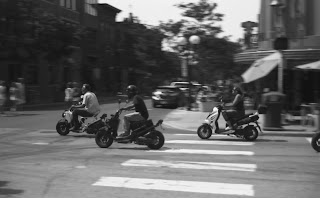 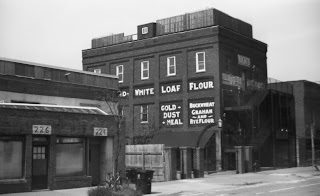 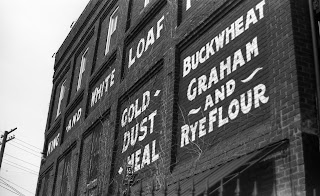 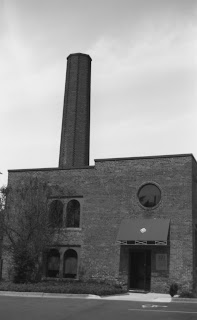 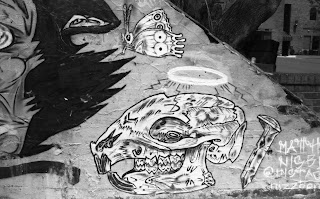 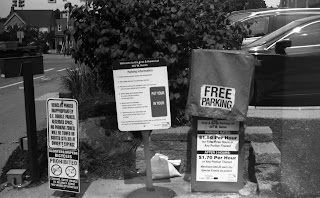 Overall, the film yielded some pretty good and interesting results.  While ISO 6 is recommended, I think it could have used a bit more exposure where there were dark reds (bricks).  So maybe ISO 3 might be better.  Using such a low ISO in the photo of the people on the scooters had me panning with the camera as they went past.  Makes them look like they are going much faster!  I have another roll to shoot and maybe I will do some bracketing at ISO 3 and 6 and see if there are any differences.

Posted by mfophotos at 9:09 PM

I love these low ISO blue sensitive films from FPP! One thing to look out for is that since they are blue sensitive, they don't work well in incandescent light. At least I haven't had luck shooting them indoors :)

My name is Anuj Agarwal. I'm Founder of Feedspot.

I would like to personally congratulate you as your blog Random Camera has been selected by our panelist as one of the Top 30 Film Photography Blogs on the web.

I personally give you a high-five and want to thank you for your contribution to this world. This is the most comprehensive list of Top 30 Film Photography Blogs on the internet and I’m honored to have you as part of this!

Also, you have the honor of displaying the badge on your blog.