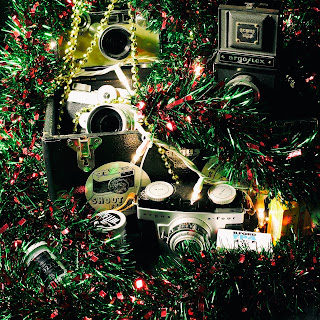 You can't escape this time of year.  For me, the Winter Solstice is a time to reflect, to connect, and to look forward to longer days. It's no secret that the winter solstice held  much importance to ancient cultures, so much so, that Christianity ended up melding its celebration of the birth of Christ to the Roman Saturnalia and the Yule traditions.   However you celebrate the shortest days of the year, I wish you the best.

I love the lights and many of the decorations and the general festiveness, and the food. Since this is a photography blog, I hope that if you were wanting that "special" photo item, you ended up getting it, or giving something to start another young photographer on his or her way.  In Christmas 1973, I received a new  Exa IIa, which cemented my love for photography.

At one time, it seemed that a lot of people had a roll of 12 exposures in their Brownie that covered not one, but often, two Christmases.  Then Polaroids and Instamatics got them shooting a bit more frequently. Here is  a really dorky photo of me from Christmas, 1966, in which I am holding my prized G.I. Joe doll (ahem, they had not come up with the term action-figure as yet).  I was 10, so that was 50 years ago.  My cousin Brenda MacDonald was less than a year old.   Are cardboard fireplaces still a thing? 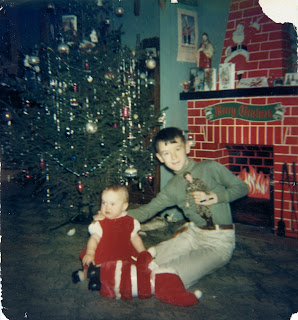 Anyhow, shoot some film, enjoy the festivities, and be careful on the road!

Love seeing your A-Four on the tree. Mine is my favorite Argus.

In 1967 I was busy having my first Christmas. In 1977 I got my first camera present, a Polaroid Super Shooter.

Gotta love the cardboard fireplace!! You are a couple years older than me, but I too had a GI Joe!