About town with a Rollei 35TE

My good friend and mentor Bill Brudon invited over to his place ten years ago, and asked me to pick from two Rollei 35 cameras that he had. I chose the later one made in Singapore, a 35TE, figuring he wanted the German-made model.  Bill was always giving me cameras, and I still miss having our occasional chats about photography and stories about his career.  He may have passed on, but I keep using the gear that he gave me. 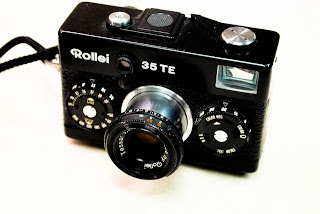 The Rollei 35TE is a compact metal-bodied 35mm camera from Rollei.  It features a collapsible lens tube, leaf shutter with speeds from B- 1/500 sec, a high-albada brightline viewfinder, a 40mm f3.5 Tessar lens, metering with indicator LEDs, a hotshoe (on the bottom), and threaded cable release and tripod socket. Mike Elek has a good page on the web about it. The 35TE model was made from 1979 to 1981. It takes a 5.6V mercury battery, which I happen to have several of.   It's a great camera to carry along, and if you don't mind using the zone focus guestimation, it is a pretty decent street camera due to its small size.  It fits into most trouser pockets as well. I hadn't used mine in several years, so I took out out a few weeks ago and shot a roll of Polypan-F with it.  I walked around the Ann Arbor Art Fair for a bit and shot most of the roll there.  In use, it's easy to prefocus at the hyperfocal distance for f/11or f/16, and just point and shoot of you have the shutter speed set already.    On a sunny day, it's easy.  Everything about this camera seems well-made, and it is fun to carry around with a wrist strap to keep it ready for action. 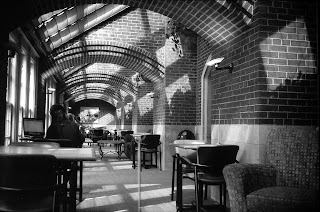 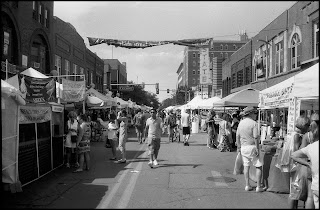 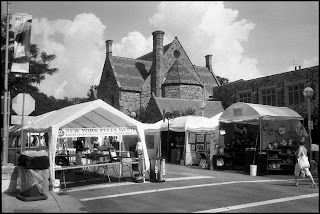 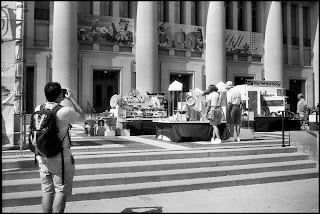 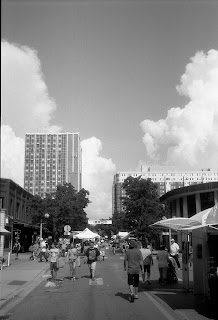 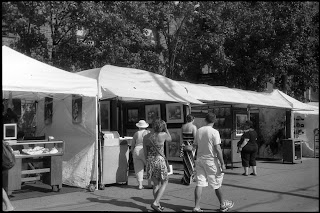 Posted by mfophotos at 3:57 PM

Thanks for the review.

I've just bought a 35 TE and there is not a lot of information about it.

All of those compact Rollei 35s are pretty similar, the slight differences being the metering, battery used, the lens, and place of manufacture. They generally are pretty foolproof, but the slower shutter speeds may gum up after a while, so they need servicing. They are great little mechanical marvels.