On the last day of August three of us went down to NW Ohio, primarily to visit Leslie Hunsberger at her store in Findlay. That part of the trip was covered here. Abby, Mike, and I also did some photo exploration of some other small towns and county seats on the way to Findlay and the return trip to Ann Arbor.
Bowling Green - A college town with a main street dominated by Victorian-era storefronts, Bowling Green is a lively place. There are some really interesting shops, and it seems to be an enjoyable place situated on the flat lake plain.

North Baltimore. - We erroneously got off at an exit on the highway due to construction, and ended up in this small town that held our attention for quite some time. N. Baltimore has a small theater, a busy rail line, and some interesting shops and eateries. It also has just enough rust to make it look a little rough around the edges, which means interesting, at least to me.

Taking Route 15 NW from Findlay, we encounted this hulking steer outside a large milling operation. It was definitely worth the stop! 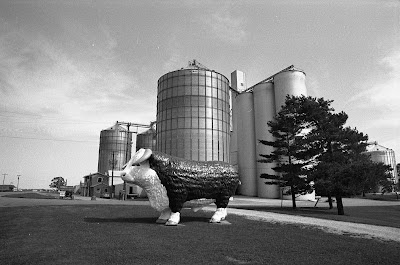 A little further on, we encountered Ottawa.Ottawa - A tidy town with a beautiful statue erected in memory of their firefighters, dating back nearly a century. There is also a nice mural on one of the buildings. I sort of felt like we had gone back in time a bit - that's not a bad thing. Like most of the places  we visited, it is situated along a rail line. 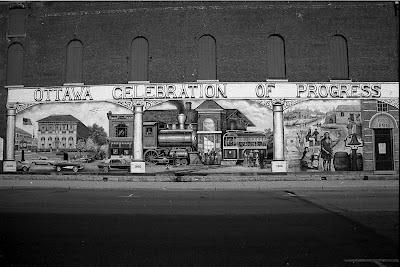 Defiance. I was looking forward to seeing the town of Defiance, and I admit that maybe with that name, I was thinking it would be grand. The downtown main street was extremely busy with many lanes of traffic, probably pulling people out to the strips outside of town. However, the closed upper floors on many buildings  lacked "charm" and it was underwhelming in many ways. That might be an unfair assessment coming from an outsider, so if you read this and live in Defiance, tell me otherwise. The city hall was symptomatic of what I mean. A really ugly upper modern story added to a late 1800s building... 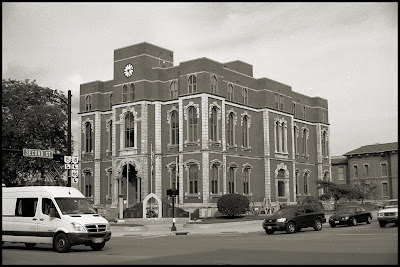 Napoleon -- Napoleon is a charming county seat with a beautiful county courthouse that dominates one end of the town. The Henry County Courthouse just glowed in the late afternoon sun.

Our last stop of the day was in Wauseon. This small town has a LOT of train traffic -- three freight trains went by while we were there. The town has seen better days, like many small towns along the railroads, but the people there are friendly, and we ate at a small cafe that had amazing prices, good friendly service, and great pie...

There is a train museum there, too, which has a nicely restored New York Central RR station.

I'll admit that it is sometimes hard to keep motivated to shoot as the day wears on, moving from one town to the next. In a perfect world, I would have some sort of grant (or lottery winnings) that would allow me to spend 24 hours at each place, shooting a lot, have a writer talk to people, and finding the scenes that tell something more about the character of a town and its people. It definitely helps to have others along to keep the enthusiasm from flagging and share the observations that we came away with.
In this climate of polarizing politics, it's important to keep in mind that we are ALL Americans, with more shared values than we believe, and most folks treat you the way they'd like to be treated. Going through the small towns of Ohio and Michigan, and elsewhere in the Midwest is one way to experience the resilience of Americans, and the ways in which we are connected.

Posted by mfophotos at 5:27 PM