Stocking Up as Kodak Reorganizes 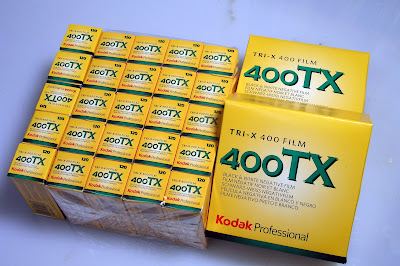 A couple of weeks ago I placed an order from Freestyle Photo for 25 rolls of Kodak's Tri-X in 120 size, and 2 bulk rolls of 35mm. That's 200 feet of Tri-X. With all of the news coming out about Kodak's impending Chapter 11 filing, I felt that I should stock up, not because I thought Tri-X was going away, but the prices might go up due to uncertainty in the supply chain, as well as people cashing in on the fear of Kodak disappearing entirely. As has been widely reported, Kodak claims that "Film remains profitable." It has to be, as Kodak can easily swamp suppliers if it wanted to, and charge even less for its product. It could also raise the price. I think Kodak's film business has probably subsidized its attempts to be a player in the printer market, among other things. So, perhaps a "film-only" spinoff like Eastman Chemicals (also profitable) would be a good thing. However, with Ilford (a dedicated b&w manufacturer), Fuji, Efke, Forte, and other film suppliers, black & white film isn't going away. I don't know how the Chapter 11 reorganization will pan out, but I have enough Tri-X to last me a year or two. Maybe by the time I run out of my current supply, the "Eastman Film Company" will materialize and continue selling silver-halide products in a little yellow box like it always has.

Thanks to the ease of putting up a web site under Google, I have built one that is intended to be a resource for users of expired films, papers, and discontinued products. It's also a source of documentation and techniques that have largely been lost in the transition to digital workflow. Darkroom Resources is still under development, and I will be adding new material to it over the next few months. Some of the documents are those that I inherited from Bill Brudon, and are not easily found in any archives, as they date well before the Internet! 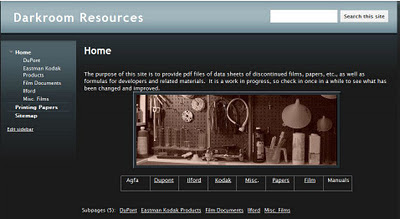 If you have suggestions for material to include, or want to contribute printed items to be scanned (and returned) and included on the site, just e-mail me.

Only 25 rolls? I'm considering ordering another 200-300. If worse comes to worse, this could be my retirement...