Yet Another Blow - Polaroid is Dropping Film 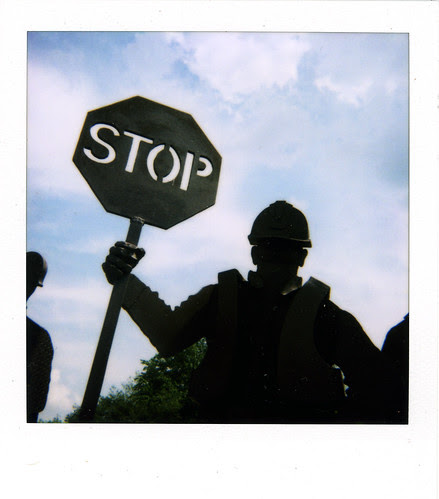 According to the Boston Globe story, Polaroid is going to stop producing films within the year. That includes the facilities in the Netherlands and Mexico that produce the consumer films. I suppose one could say that it was inevitable, but maybe Fuji will acquire the remaining technology from Polaroid. There are a bunch of highly-regarded fine art photographers that use large-format Polaroid film for their work; photographers that use the 600-series films for a variety of projects, and the artists that use emulsion lifts and transfers as their main biody of work. It's a shame that the films will die. Polaroid execs are quoted as turning to LCD TVs and digital cameras. Great...just what we need - another brand name stamped on electronics from China. It's too bad that the company that was once at the apex of inventiveness and technology (not to mention stock prices) has turned into a dim shadow of its former self. It would be easy to blame the digital revolution for Polaroid's demise, and of course it has had a major impact upon a company that once employed 15,000 in Massachusetts. I think there still has to be a viable niche market. I have to wonder if it can't be possible for some company to acquire the plants that make the film and run it as a boutique operation. Come on, Kodak... time to get even and buy that Polaroid technology...

So, if you stock up NOW on Polaroid film... you'll be okay for another few years, until it degrades and is no longer usable.
http://www.blogger.com/img/gl.link.gif
Damn. Edwin Land, R.I.P.

Another article from CNN online. It's about time that some people acknowledge the unique uses and qualities of Polaroid films, and that for those applications there is no other alternative.

Eric Zechar says it well, and what makes a Polaroid image so special.

Save Polaroid Site
Posted by mfophotos at 12:25 PM

And to think I just bought a 545 to use with my Speed Graphic.

The gods mock me.

Another stupid decision made by the bean-counter/MBA types.
-Sid

That's a shame for many reasons. I know there are many out there who still to this day enjoy the simplisity of Polaroids, including myself. It's a shame to themselves too for letting down what made them Polaroid.

Thank you for this post. I have many fond memories of this film on holidays, birthdays, graduations and many special occasions. I think Kodak is making a mistake and I hope that someone else picks up the film. It's simple but it was and is so much fun to use. It's tangible photography. Give someone a Polaroid and watch the process of Aim, Shoot, Shake and React. Please feel free to visit my blog, thank you.