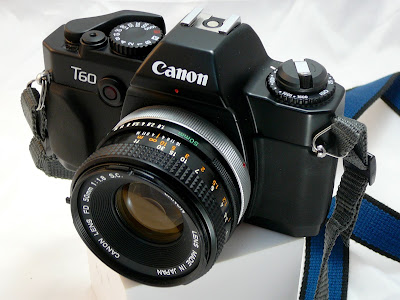 Last month, a friend gave me this Canon T60 that she picked up at an estate sale for $10.  I promised her that I would shoot with it.  The Canon T60 was the very last FD-mount SLR that Canon sold.  Note the emphasis on sold.  Canon didn't make it, but Cosina did.  Like a bunch of other manual cameras produced at the end of the reign of manual SLRs, The Canon T60, Nikon FM10, Olympus OM 2000, Yashica FX-7, and Konica TCX, were all made by Cosina.  Whatever is on the outside, it's Cosina inside.  Not that it is necessarily a bad thing, as you'll see.

The Canon T60 appeared in 1990, well after the Canon EOS series had been introduced.  There was enough demand for cheaper alternatives using the FD-mount, that Canon contracted the camera's production with Chinon, and in the process, ended up with a traditional-looking sleek SLR that was certainly quite different from all the other FD-mount cameras, as well as the rest of the T-series.

The GOOD
The T60 is a lovely, all-plastic camera. It is lightweight, and coupled with a standard 50mm f/1.8 FD lens, makes for a sweet carry-around SLR. Unlike most Canon FD-mount cameras, it has a vertical Copal Square shutter, APERTURE-priority and manual control, and requires 2 LR-44 cells to operate.  The vertical metal-bladed shutter keeps it in line with the rest of the T series cameras - T50, T70, and T90.  Unlike the other T-series cameras, it has manual film advance.  Again, this is a Cosina camera, not a Canon! The controls are easy to use, and the camera has a nice feel in the hands.  The viewfinder is pretty good, and the shutter speeds show on the left side of the viewfinder. Focus is with a split-image center spot, surrounded by a microprism collar.

The BAD
Basically, it's the plastic body.  I am sure if handled properly and not abused, the T60 will be just fine. If the 2 cells lose power, there is no manual mode on the camera, so it's dead until you put in fresh LR-44s. It would make a great "student camera" and certainly does not suffer from the AE-1 squeak and issues with older FD-mount cameras.  As an A-mode camera, I would love it if it had a +/- compensation dial. But face it, this camera was designed for a particular price point, and in that, it succeeds. 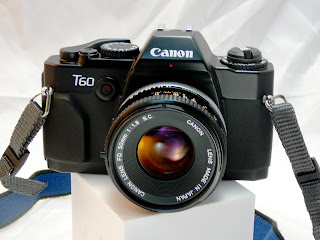 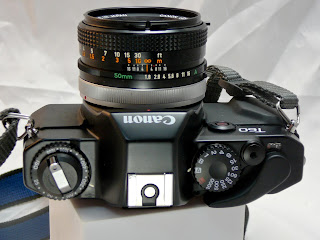 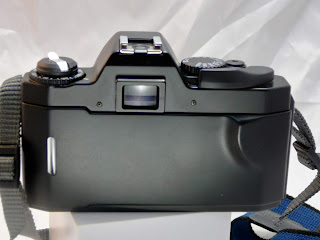 RESULTS
The feel of this camera reminded me of the Yashica FX-7 Super, which I really liked.  Its light weight and precise feel of operation really made it a fun camera.  I shot with a Sunpak Auto 311 flash and had great results.  After putting 4 rolls of film through it, I cannot find any fault with the exposures in A mode, or the flash photos at 1/60 sec.  I shot it with Ilford HP-5+, and here are a bunch of examples, including some with the FPP gang in NJ.


Buying one?  This is a more recent camera than any other FD-mount Canon. The FD series of lenses are quite affordable, and typically good quality. The only factor might be the mirrorless uses that could drive up the prices on some of the lenses.  Put a 50 mm lens on it and be done.  The T60 cameras on ebay are usually in the $25-$60 range, depending on lenses, etc.  It's certainly a more ergonomic camera than the T50 and T70 cameras, and not a beast like the T90.  Its sleek, all-black finish will charm you into buying one.  Make sure that you get one that has not been mistreated.