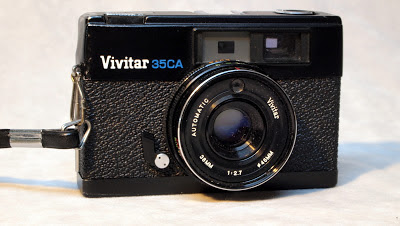 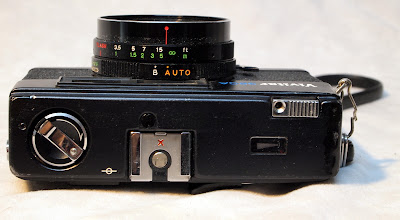 A couple of months ago I purchased a Vivitar 35CA on ebay.  It wasn't in as good condition as advertised, and the shutter did not seem to be working properly.  I didn't pay much for the camera, so I set it aside.  Every once in a while, I would try the shutter (and I had put in a new LR44 cell).  To my surprise, one day it appeared to work like it is supposed to!  So, I put in a roll of Kodak Gold 100, and shot it over a couple of days.    The 35CA is an auto-exposure camera that adjusts both aperture and shutter speed automatically.  The only manual control is in B (bulb) mode.  It has a hot-shoe as well as a PC-sync connector for using a variety of strobes.  There is a Guide-Number setting on the side of the lens barrel that may allow for exposure adjustment based on distance, but I have not yet tried it.  The lens is a 38mm f/2.7 lens which isn't exactly wide nor fast, but it gets the job done.  A few years ago I reviewed the Vivitar 35EE, a slightly larger and older model that used mercury batteries. Like that camera, this one features a filter ring that allows you to use screw in 46mm filters.

So, here are some examples from the roll of Kodak Gold 100.  I was actually pleased with the camera's low-light ability, and less so with bright light.  However, it definitely will give results that are satisfactory, and maybe even just a tad funky.  More rolls need to be shot so that I have a better feel for what the camera can do.

This looks like one of the many cameras competing in the Konica C35 space. Thanks for introducing me to it, as I'd not seen one before.

The N90s is one of my favorites! And it is a bargain today considering it used to be over $1000 back in the day...

The N90s is one of my favorites. And it is quite a bargain today considering it was over $1000 back in the day...

Mark, I have found the exact camera recently. I have done a lot of digging online to try and find a manual or something for this camera. To no avail, I am looking for the battery type and if there is a film cover for the shutter. Thanks!