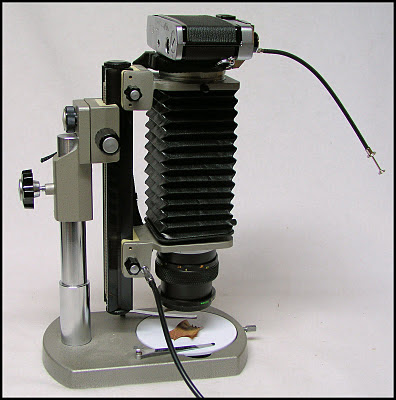 Back in early October I picked up an Olympus macro photography stand with the matching bellows for an Olympus OM-series camera. It's quite similar (but better-constructed) than the Minolta macro set-up that I used to own. I rarely use film for macro-photography anymore, but at a price of $25, I could not pass up the Olympus macro stand. As you can see in the photograph, I have it it set up with my OM-1 and a 50mm 3.5 Olympus macro lens. By itself, the lens does 1/2 size (1:2) maximum magnification. With a typical set of extension tubes, one can go a little larger than 1:1 (life size). With a bellows, you can go several times life size, if you want to shoot small objects, or magnify parts of larger subjects. The problem with a bellows and extension tubes, is that the working distance (the distance from the front of the lens to the subject) is very small -- from a few inches to fractions of an inch, depending on the extension. In addition, there is significant light falloff, shallow depth of field (DOF) and movement is magnified. So, the easy way to avoid some of the drawbacks is to use the camera like a microscope, by keeping the assembly locked down to a solid rail as you can see here. Typically, one would use a ringlight or a couple of small flashes near the subject for great DOF at f/16 or f/22 and to avoid camera shake. However, you can also use fiber-optic lights, and other high-intensity LED lights to get proper lighting at these close distances. The other thing to note is that there are two remote-release cables. One is for the lens (to activate the aperture prior to making the exposure, and the other operates the camera shutter. That is typical for bellows, as the lens is not linked to any actuating mechanism on the camera body.

I took a few shots with the OM-1, and here is the side of the thorax of a Canada darner dragonfly. I would imagine that if you had an OM-series adapter for your DSLR or Olympus Pen (digital), it would be a great way to shoot small things. Macrophotography is one of the great things about shooting digital! 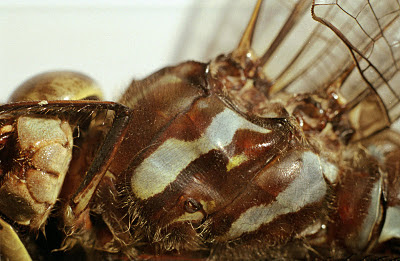 Its not for nothing that olympus is one of the great makers of microscopes. The whole setting looks like a microscope stand. Hope you have much fun with it.

Oh yes, we have some Olympus dissecting scopes here at work, one's trinocular with an OM-mount on it. The Oly stand is definitely more robust than the equivalent Minolta stand I had.