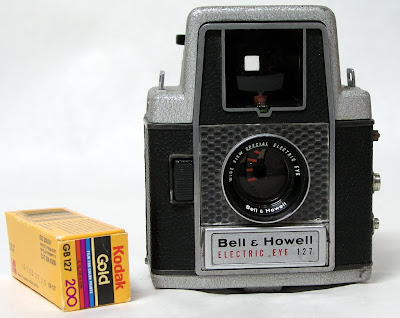 This is actually a very easy-to-use 127 camera that appeared about 1958-59. With its electric eye and automatic aperture control and large viewfinder, it made picture -taking relatively easy. Of course, the big problem is that 127 film is now fairly hard to come by, and that's really too bad, as there were some fun cameras and some very well-made cameras that used 127. I have sold off most of my 127 cameras, and I have this one up on ebay, just to clear out some space and rid myself of cameras that I am no longer using. The B&H EE 127 was actually a very well-made camera, and the Selenium cell has lasted far longer than cameras of more recent vintage. Just to show you that the camera can take some nice square images, here are a few from about 6 - 8 years ago that I shot on b&w film. I think square format in 127 size really makes the best use of that format, and back when one could buy Ektachrome in 127, it was used to shoot "super slides" - that could be used in a 35mm projector. The 4x4 Rolleiflex, Sawyer's and Yashica TLR cameras are, in my opinion, the best cameras made for 127 film.
Posted by mfophotos at 12:51 PM