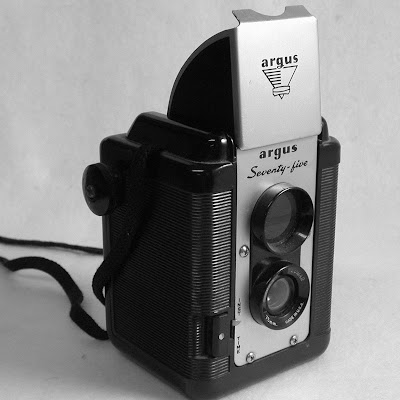 The Argus 75 is a fun little bakelite wonder from Ann Arbor-based Argus. Produced from about 1949-1964, the camera takes 620 film. It has a shutter-cocking feature that prevents double exposures -- which was useful if you were one of those families that had at least two Christmases, Halloweens, or whatever on one roll of film (12 exposures). The Argus 75 (which started out named as the Argoflex 75) was the very first Argus that I bought in an antique shop in Cheboygan, MI about 8 or 9 years ago. I then started acquiring other Argus cameras, and as they say, "The rest is history."

The cameras isn't a real TLR in the sense that it's really a box camera with a reflex viewing window that uses a second lens. There is nothing to adjust except for Instant and Time, for making your exposures. The Time is important, if you wish to shoot in dim light, or convert the camera to a pinhole. A very useful feature is that Argus put a tripod thread on the bottom of the camera, making it more versatile. It's hard hand-holding a camera for time exposures.

The 75mm lens is coated, and the aperture is about f/13. "Instant" shutter speed is about 1/60 sec. Back in the day, Kodak's Verichrome Pan was the ideal film for this camera. Today, you could use Ilford FP4+, Kodak Plus-X Pan, or Fuji Across 100 for sunny to cloudy-bright conditions. For color -- Fuji Superia 100 works well. Since it was designed for 620 film, you can put a 620 spool in the take-up reel, and a trimmed 120 spool on the supply side. If that's too tight, you may have to respool your 120 film onto a 620 spool.

I once offered to write an article on the Argus 75 for Lightleaks magazine, but the editor told me it wasn't a "toy camera." It's just as much of a toy as the Kodak Brownie Hawkeye, or the Agfa Clack. To be sure, a well-made box camera, but really, nothing to adjust except for the shutter between Instant and Time. So, in that sense, it's just as much a toy camera as the Holga...maybe more so.

Since this camera has a tripod socket, it is easy to set it somewhere low and use the time exposure to good effect: The camera typically has everything in focus from about 7.5 feet to infinity. If you can find the Argus "portrait filter" (a close-up lens), you can shoot things that are about 3 feet away (or experiment with other close-up lenses): There are a number of variations on the Argus 75 -- and rather than repeat what is already out there on the web, go on over to James Surprenant's website. I often get asked how much these cameras are worth. Not really much. Don't pay more than $10 for one in great condition with the leather case and flash holder. The average value is probably closer to $5. Argus made a lot of these, and if you get a good one (most are in working condition, but you will need to turn the film winding knob to cock the shutter - look for the red to appear behind the lens) - give it a try with some film.

My pal, Gene McSweeny takes great photos with vintage cameras, so check out his Argus 75.

A gallery of all the Argoflex cameras can be found here.

Lovely photos! (I found your blog through your contribution on the Blurb forum)

i have one a argus 75, i would like to know where to find the film for it

Thanks for information about the Argus Seventy-Five I was wondering if I should keep the camera. I also grew up in Ann Arbor. Are those first shots of the Huron River?

I often have a supply of 620 film -- very expired Verichrome Pan, for instance, and often use that with pretty good results. Of course, you can trim 120 spools, and in most cases that works, too.

Thanks for the info.....I just went thru my late fathers Air force foot lockers and there it was the camera..... I think I just might try it out... if I can locate film for it..... I have also found negatives too that are like 45 to 50 years old in great shape.... I have to go to WOLF camera to have them send them off for process....... I am excited....

You seem to have some experience getting good exposures with your Argus. Are you doing timed exposures or do you use the 1/60th shutter speed?
If I were to shoot some 100 ISO on a sunny day, do you think the 1/60th would be enough light or would I have to push process it after?

Andrew: ISO 100 was considered to be the defacto film speed for these cameras when they were new. Any sunny exposure will be fine. 1/60th at f/11 is actually a bit of overexposure in full sun, but with the latitude of negative film, that would be just fine. Part of the fun of these cameras is finding, serendipitously, what works for you.

Is the 75mm Lumar lens a triplet or a meniscus type lens?

Joe -- The lens was branded as a 75mm Lumar, and was a single meniscus element in front of a fixed aperture of approximately f/11.

Hi Mark. I just bought an Argus75 today (for $30 ugh..) but I know it will be worth it. I love the pictures you have taken, very inspirational. I was hoping if you could help me find film for the camera. I tried ebay and google, but I cannot seem to find any great results. Please help..I'd greatly appreciate it.

Alexandra: You can use 120 roll film, and I would try Kodak Ektar 100 color print film. It's carried by B&H, Adorama, Freestyle Photo, and real camera stores. However -- you need to make sure that you have a metal 620 take-up spool, and you may have to trim the flanges of the plastic 120 spool that the film is on for it to fit on the supply side. Or, you can try buying 620 from B&H. I would go with the Portra 160. http://www.bhphotovideo.com/c/search?Ntt=620+film&N=0&InitialSearch=yes

Thank you so much!

I grew up in a small town with 5 brother's and sister's. Around 1954 when I was around 2 year's old my family (all 8 of us) were heading to KC from Nevada Mo (about 100 miles) and was hit head on my a drunk driver. The insurance money my Dad collected covered buying a new used car and he went to a jewelry store in Joplin Mo and bought an Argus seventy five camera. Thus 100's of family pictures were taken mostly outside due to the fact the flash bulbs were costly. My Mom shipped the film to a company called McPenny's in Springfield Mo. (which I can not find any histoy of this company)??
You can view the family photo's taken with the Argus camera in the 50's, 60's and 70's on my blog. The family outdoor snap shots are ALL from this camera! Love your blog!

Kaye: That is a great story, and it's wonderful that you have all those photos from those early years. :)
Mark

I have an Argus 75 camera my parents had before I was born, it's in mint condition.

Hi, your blog is extremely helpful and helped me clarify what I was trying to explore in regard to a vintage camera.

Can you recommend a box camera with a relfex viewing window? Or is this a pipe dream of mine. I love the way the images look with those older cameras. I know the majority of it is the photographer, but I just want to see what it's like.

I want to try what you referred to as a box camera with a reflex viewing window. Do you think this is something that is doable?

Thanks for your blog. It is the cats pajamas

Michele,
There are a bunch of box cameras that are in that category. The Kodak Duaflex cameras, Argus 75 and Argus 40 cameras are among the most common. Ansco had several models, and a bunch of others. The general impediment to many of these are that they use 620 film, which is the same size as 120 film, but the spool is thinner and there are workaround. email me and I can give you some other ideas and models of cameras.

Would anyone want to buy one?

I have an Argus Super 75 (same body as the 75, only with a front-focusing triplet lens and waterhouse stops for f8, f11 and f16.

Anything BUT a toy. I was quite impressed with my 6x6 slides. The slides looked less grainy and more colorful than my 35mm slides.

I didn't use it that much. MF sildes were pricey, mounts became hard-to-find, and changing slides on the necessary larger projector (on my budget) is a pain

Mark, are you still active on here? My name is April Holland. I googled Argus argoflex camera because I found one of my dads old cameras. Upon reading your article, I saw that you mentioned a guy named Gene McSweeney. My Dad (who has since passed away) had a best friend named Gene McSweeney. Small world, or maybe you all know each other? My dad was Ken Holland.

April,
Thanks for your comment. I only know Gene via the web, and he's (I assume still is) in Massachusetts. I don't know Ken Holland, though. I will bet that the Argoflex took a few photos, and hopefully you found those.
Cheers,
Mark

It seems like it takes me forever to learn new things. I have to have a reason to want to learn about something before it sticks. Several years ago, I'd started picking up old cameras at Goodwill hoping for found photos left inside and found quite a few cameras with film in them.

Only five of the old cameras I picked up remain in my display. The Argus Seventy-Five is one. Turns out, I was not too handy with film and decided to send the rest of the collection back to Goodwill. So I'd really never closely looked at the cameras I kept, all I knew was that they looked pretty sharp sitting on my shelf in black and silver.

Just a week or so ago, I read Nothing But a Smile which is set partially in Michigan. There I learned that the Argus was a Michigan made camera. It finally captured my interest and I actually looked at my camera. It's simple enough. I looked up what kind of film it took and ordered two rolls. They came today. Ok, now I had to look up how to load the film and find I need an empty spool...yes, I was of the age of cartridge film and even the lowly, dreaded disk film. So back to The Film Photography Project website to order an empty spool.

While I'm waiting for that to come, I'll clean up the two cameras I have that shoot the 620 film. One thing that really appeals to me on these cameras besides how small and simple they are, is that you look down into them. So when photographing people, it might be easier to capture a candid expression when it just looks like you're adjusting your camera and not pointing it in their face.

Anyway, I'm looking forward to trying the Argus 75 and the Kodak Duaflex soon. Your Random Camera Blog was one of the first links that came up in my Argus 75 search.

I have an Argus 75 with an adaptor kit for 35mm.film and to red film indicator numbers on the back. I can't find information on this variant anywhere. Please hep!!!

Are you sure it's 35mm? An Australian version of the Argus 75 features 2 red windows and masks for 6 x 4.5 cm. I suppose someone could easily have made a 35mm adapter inside, but the red windows would have to be covered.
Mark